Covid-19, NFC, and the Future of Contactless Payments

Once touted as the future, contactless payments never achieved mass popularity. Shoppers preferred the familiar swipe, dip, PIN-entry, and signature. The Covid-19 pandemic will likely change that as consumers are now more conscious of what they touch.

In this article, I will discuss NFC (near field communication), the technology that powers almost all in-store contactless payments. I’ll explain how NFC works and how its payments are secured. I’ll also examine the advantages of NFC along with challenges to overcome before such payments are anything other than a novelty.

A contactless payment does not require the customer to touch a merchant’s point-of-sale equipment. Instead of touching PIN-pads and pens to authorize transactions, a contactless payment allows customers to wave their payment method close to a payment reader. This is commonly called tap-to-pay, but “tap” is not the best description. A tap is not required. It’s enough to move the payment method close to the reading device.

NFC facilitates many contactless devices. The most common are NFC-enabled credit cards and smartphones, but non-payment devices such as key fobs, watches, fitness trackers, wristbands, and other wearables can also contain NFC chips, commonly referred to as NFC tags.

To check if a device is enabled, look for the contactless payment symbol — four curved lines forming a radio signal. Thanks to Covid-19, we’ll be seeing a lot more of these symbols. 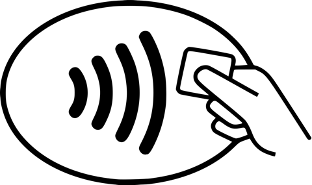 To check if a device is enabled, look for the contactless payment symbol.

Near field communication is a way for two devices to communicate over radio waves. The term “near field” is used because the signal range is very small — no more than two inches, typically. For NFC payments, the two devices are usually a smartphone that stores credit card details and a contactless-enabled point-of-sale terminal. Almost all new credit cards have embedded NFC tags, too.

Communication between NFC devices is either passive or active.

Passive NFC transactions require only one device to supply electrical power. The passive device (commonly a plastic credit card) receives its power from the radio waves emitted by the reading device. For payments, the NFC point-of-sale terminal constantly emits radio waves while waiting for a passive device to enter its field. When that occurs, the credit card details are transferred to the reader.

Interestingly, if you were to disassemble a contactless credit card, you would find a very thin wire antenna wrapped around the perimeter of the card. It’s this tiny antenna that transmits your credit card details over radio signals to the NFC terminal.

An active NFC transaction occurs when each device provides its own power. A smartphone is a good example of an active device. Apple Pay, Google Pay, and many other payment apps use NFC to perform active transactions. Both devices in an active transaction can transmit and read information over the near field.

There are three modes of NFC communications: reader, peer-to-peer, and card emulation. Each can be used for payments.

Merchants and their acquirers (i.e., merchant account providers) can also configure their contactless terminals to prompt for a PIN if the contactless card is used for multiple purchases in a short period.

However, before they become universally accepted, contactless NFC payments must be overcome several challenges, including:

See “Are QR Codes an Option for Contactless Payments?“