The difference between a “social media influencer” and an online “creator” may be no difference at all. Defining these terms has more to do with opinion or perspective than it does actual divergence.

Thus, influencer and creator could describe the same individual acting in distinct but similar capacities.

The idea that influencers and creators are one bucks a trend. Many websites and pundits draw differences between the terms.

Think about how the terms are used. A Venn diagram can help. 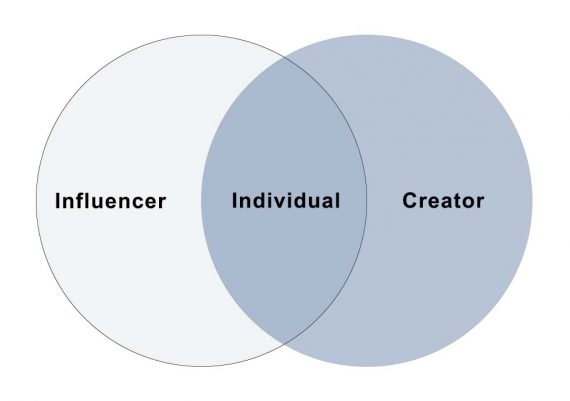 The terms “influencer” and “creator” likely describe the same individuals.

An influencer has a reputation for knowledge and expertise in a given subject and has grown an audience of engaged subscribers, followers, or fans. The influencer’s reputation is often the result of regular engagement around her topic.

In a series of articles, contributor Joe Sinkwitz identified three types of influencers: celebrities, authorities, and peers. Sinkwitz was even kind enough to mention me by name.

“What do Kim Kardashian, Armando Roggio, and your neighbor have in common? They’re all influencers,” Sinkwitz wrote. (Thanks, Joe.)

The term influencer is often used in the context of marketing, as Sinkwitz employs it.

An ecommerce business might pitch an influencer about its products, encouraging the influencer to endorse the items in exchange for payment or trades.

This is often good for everyone involved.

The audience wins, as influencers typically will not endorse a product or service unless they think it is helpful. The relationship to their subscribers, followers, and fans is too important to risk hawking second-rate stuff. Thus, the influencer’s audience can trust the recommendation.

“Creator” is the second term I am considering. A creator produces original content to engage an audience of subscribers, followers, and fans. The creator develops a trusting relationship with his audience, which makes him influential.

The creator economy, then, is when an individual produces content to make money. Creators can receive revenue sharing from a platform. The creator might sell products. And the creator can generate income from sponsors and, often, from affiliate marketing.

Note that influencers and creators have a lot in common. They might be the same people.

Pat Flynn of Smart Passive Income is a compelling example. Flynn creates a lot of content. He has a long-running podcast. He holds conferences. There are articles on his website and his YouTube channel with more than 300,000 subscribers. 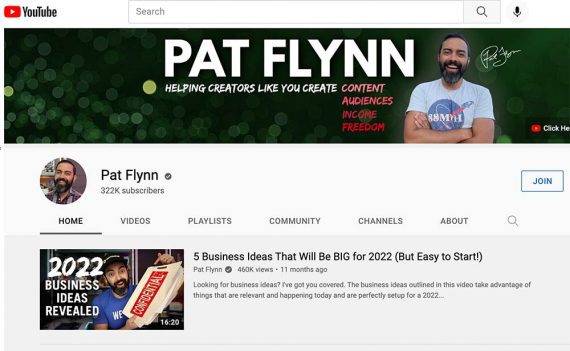 Pat Flynn is a creator-influencer. He has produced hundreds of articles, podcasts, and videos. And he has significant influence over his audience.

Flynn is both a content creator and an influencer. Your view of him could determine how you describe him.

Quality. Some have argued that the difference between creators and influencers is content quality. They say that creators focus on good content, while influencers aim at persuasion. But this is incorrect. MarketingProfs’ Ann Handley appears at the top of lists for business influencers, and she creates quality content.

Artistic. Others argue that the difference is artistic. They say creators are fiction writers, painters, digital artists, and musicians. Conversely, influencers are podcasters, nonfiction writers, teachers, and business coaches. But that assumes podcasting or blogging is not creative. Similarly, it is incorrect to say that artists cannot be influential.

Gender. Some suggest that the labels relate to gender — women like to be called influencers, while men prefer creators. But this idea seems farfetched and sexist.

Platform. Others argue that the platform is the difference. Someone is a creator on YouTube or TikTok, but an influencer on Twitter or LinkedIn. But what do you do with folks whose audience transcends a platform?

Money. Finally, some have described the difference between creators and influencers as how they earn income. But these individuals often have multiple revenue sources.

In short, the terms “creators” and “influencers” describe a relatively new class of entrepreneurs. Their vocation is creation. And their power is influence.