Ecommerce continues to be a favored investment for venture capitalists — with a strong showing in the second quarter of 2015. While in the past American ecommerce firms were the main beneficiary, today the investment picture is much more international, with Indian and Chinese companies attracting lots of money from both American and foreign firms.

Where Is VC Money Going?

The biggest deal of any kind in Q2 of 2015 delivered $1.5 billion to Airbnb, the site that connects people who want to rent out a room or a home for a few days or months. Airbnb has received seven rounds of funding totaling $2.3 billion. This deal, unlike the previous six, was a private equity investment, which usually is a large amount of money for a well-established firm that has received previous VC rounds.

In the marketing technology (martech) sector, ecommerce led 19 other categories — including ad technology, marketing operations, analytics, and development platforms — in Q2 2015, attracting over $425 million in funding.

The biggest fintech (the integration of finance and technology) deal of Q2 was a $275 million Series B funding for San Francisco-based Affirm, a startup online lender that lets online merchants offer customers an instant point-of-sale financing solution with the merchant paying the interest.

Preqin, a data and intelligence firm, reports that for 2014, ecommerce deals comprised 44 percent of the total number of Internet VC deals and 58 percent of total deal values.

Globally, of the top four ecommerce VC investments in 2014, three were in India and one was in China. Indian marketplace Flipcart received two rounds of funding totaling $1.7 billion and competing marketplace Snapdeal received $627 million in one round. Meituan, a Chinese group-buying site for consumer goods received $700 million in VC funding.

According to analyst firm CB Insights, between 2010 and Q2 2015, the U.S., India, and China were the top markets for funding to ecommerce startups. Combined, they accounted for 62 percent of global deals and 71 percent of total funding going to physical goods ecommerce startups. Indian deals are typically for later stage investments (beyond Series A), with less than five percent of funds going to early stage start-ups.

Between 2010 and Q2 of 2015, for physical goods, Chinese ecommerce companies received the most funding: about $9.9 billion dollars for 188 total deals. Chinese companies receive a higher average deal size than either the U.S. or India. The U.S. market has seen $9.8 billion invested over 962 deals, for an average of $10 million per deal, less than one-fifth of China’s deal size. However, the U.S. market drives extremely high deal volume and accounted for 45 percent of global deals.

According to Preqin, in the first two months of 2015 ecommerce comprised 47 percent of Internet VC deals and 73 percent of aggregate deal value. Chinese companies accounted for 39 percent of investments and the U.S. and India each contributed 20 percent, with Europe at 19 percent.

The most active American venture capital ecommerce investors are:

Moscow-based DST Global focuses on late-stage ecommerce companies. While most of its investments are in the U.S., in 2014 it started investing in Chinese and Indian companies and continues to do so. It is a major investor in Flipcart and was an early private equity investor in Alibaba. GIC Private Limited, owned by the Singapore government, is an active investor in Asian companies.

Angel investors who focus on early stage start-ups that require smaller amounts of money also find ecommerce to be an attractive investment opportunity. Many people who have started their own companies and become wealthy are active angel investors, both devoting their own money and fronting syndicates. Among those on AngelList are David Sacks, the founder of Yammer, Max Levchin, co-founder of PayPal, Reid Hoffman, founder of LinkedIn, and Kevin Rose, founder of Digg. All have invested in more than 40 ecommerce start-ups. 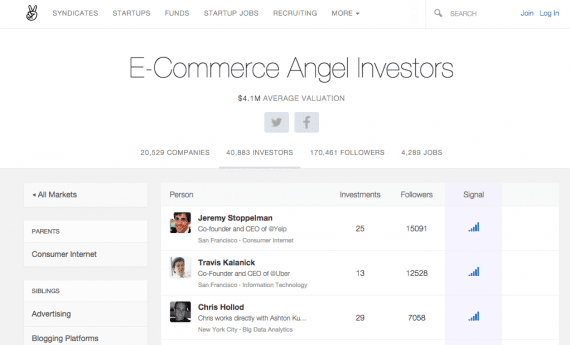 The ecommerce investors on AngelList are numerous and prominent.

Ecommerce companies — merchants and technology providers — will continue to attract both angel and VC investors. Private equity is becoming more popular for well-established companies that still wish to remain private but need large amounts of capital.

As ecommerce grows in China and India, more local companies will look to VC investors for capital. Over the next five years these two countries will probably garner the most VC dollars, if not the largest number of deals. American VC firms will likely provide most of the capital.