Edwin Elijah Perkins had a shipping problem. His business, the Perkins Product Company, had more than 125 household and food products in its catalog, ranging from pie filling to hair remover. The products were sold in retail stores, through distributors, and direct to consumers via door-to-door salespeople and mail order. And mail order was the problem.

A series of fruit-flavored beverage mixes called Fruit Smacks were among the company’s best selling items. Customers could combine the concentrated Fruit Smacks syrup with water to get a sweet soft drink.

Fruit Smacks were packaged in glass bottles that were both heavy and fragile. The weight made the product relatively expensive to ship. The propensity for breaks and spills make it very messy for both the package carrier and the customer.

Edwin Perkins was born in 1889. In about 1927 he converted the Fruit Smacks shipping problem into a huge opportunity for this business. Maybe this wasn’t much of a surprise to the folks who knew him. Perkins it seems was a confident and inquisitive serial entrepreneur and businessman.

If you read one of Perkins’ short biographies on Wikipedia, the NebraskaStudies.org website, or an old newspaper clipping, you learn that he began developing products and earning money at a pretty young age.

Perkins’ family owned a general merchandise store. “The family’s living quarters were in the back of the store and every member of the family had his duties in making the store a success,” wrote Walt Sehnert in an October 10, 2007 column for McCook Daily Gazette, in Nebraska.

“Young Edwin had an inquiring mind and proved to be a real pest in his mother’s kitchen, as he was constantly experimenting with various household ingredients in an attempt to invent new products for the family.

“At age 11, he ordered a junior chemist’s set from a mail-order house and began to develop his own line of useful products — from perfumes to flavoring extracts to healing salves for people and animals.”

The transition from kitchen chemist to opening the Perkins Product Company was not immediate. Edwin took a few detours along the way.

At age 13, he had become the postmaster for Hendley, Nebraska, according to the Nebraska Studies website. He also began to dabble in printing and launched a local newspaper, The Hendley Delphic.

Combining his knowledge of the postal service, his printing expertise, and his passion for medicines and household products, Perkins started a mail order business in the back of the Hendley post office. (Presumably, he never missed a shipping cutoff.)

By the time Perkins was 31 the company had moved to Hastings, Nebraska, and many of his products were marketed under the “Onor-maid” brand, which could be read both as “honor maid” or “owner maid.” 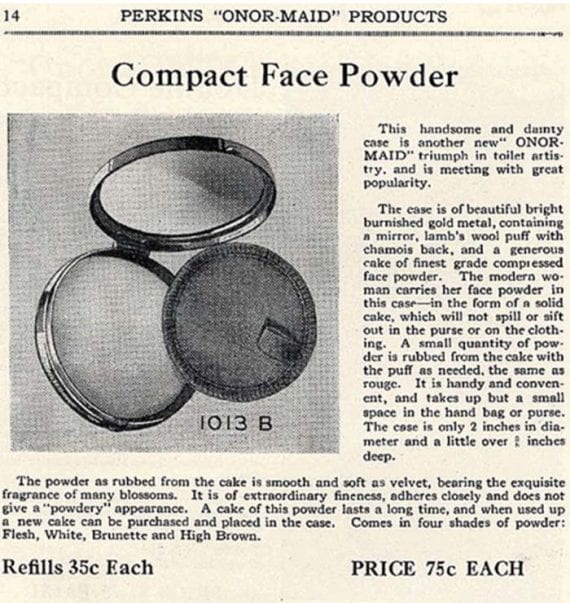 Perkins printed his own “Onor-maid” catalogs. The company had more than 125 products.

Inspired by Jell-O — which had been a good seller in the family store — and the work he had done perfecting fruit pectin powders as part of the “Onor-maid” line, Perkins began experimenting with Fruit Smacks, “focusing on the right mixture of dextrose, citric acid, tartaric acid, flavoring, and food coloring.” Eventually, he developed a powdered, dehydrated version of Fruit Smacks that could fit in tiny, easy-to-ship packages.

Perhaps to differentiate the new powdered drink mix from its syrupy predecessor, Perkins created a new brand name. The product name was originally spelled Kool-Ade, but by 1934 it had taken on the more familiar spelling, Kool-Aid.

Kool-Aid became so popular that Perkins dropped every other product to focus just on the powdered drink mix. His company grew, moved to Chicago, and employed more than 300 folks by the time he sold it to General Foods (which has since merged with Kraft) in 1953.

While Perkins story may be interesting — perhaps you hadn’t known or guessed he invented Kool-Aid — it should also be relatable. Every ecommerce business will face problems and setbacks. But a problem doesn’t have to lead to failure.

“Finances were a problem, too. Back in 1923, banks in Hastings would not lend money to expand Perkins Products, so Edwin turned to private individuals for loans… When it came time to develop the powdered soft-drink business, Edwin again borrowed from a private source and mortgaged the factory building on First Street for $10,000.”

While I am in no way encouraging taking loans or mortgaging your property, Perkins actions demonstrated his resolve. He knew he wanted to own his own business, just like his parents had, and he had the resolve to succeed.

Perkins’ example could inspire you to elevate your ecommerce business.