From Shopping Cart to Ecommerce Platform and Back Again?

Ten or 15 years ago many of the companies selling goods and services online would have described their ecommerce software as a “shopping cart.” Now, changes in software development could bring the term back.

As ecommerce has changed, so has the software used to conduct business. It has evolved from a simple add-on meant to process payments to a central hub for digital commerce.

For the sake of explanation, let’s describe three discernible, evolutionary phases for ecommerce software and associate those phrases with the terms “shopping cart,” “ecommerce solution,” and “ecommerce platform.”

These phases or eras overlap and the divisions are not perfectly clear. But, nonetheless, it helps us think about ecommerce software.

When Amazon and eBay were getting their start in 1995, ecommerce software was often a simple script added to an existing website to process payments.

In the shopping cart era, you needed to understand (or hire) basic web markup and JavaScript to implement ecommerce. You would need to build a website, set up a database (if you were even using a database), and then integrate your shopping cart.

This didn’t work for every business that wanted to sell online.

Before long, companies such as Yahoo and Miva started to provide specific ecommerce solutions that included all of the software needed to sell online. These solutions required relatively little technical expertise and were relatively easy to use.

By the time Magento was released in March 2008, ecommerce software started to get a new name. It wasn’t a “shopping cart.” It was an “ecommerce solution.”

Comprehensive ecommerce solutions made it easier to get started with ecommerce, but could not deliver the best of everything.

Rather, an ecommerce software solution might be good at one or two of the tasks associated with selling online, but not all of them.

So ecommerce software transformed again, moving from an all encompassing solution to a hub or “ecommerce platform” that managed core “ecommerce features,” such as processing payments, tracking orders, storing customer accounts, and keeping the product catalog. It integrated with other software and services, too.

Ecommerce software, in a sense, had gone from being an add-on to a website platform to being the platform other services were added to. 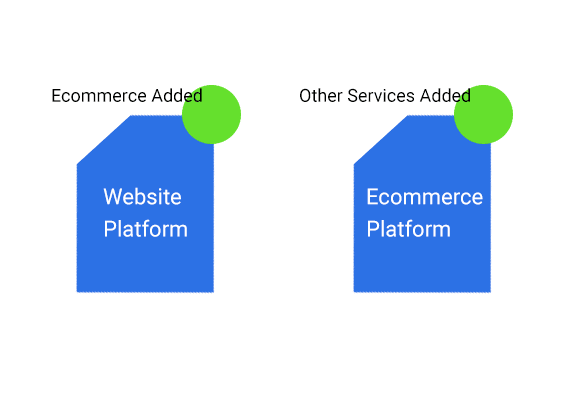 Ecommerce software had evolved from being a script that one adds to a website to being the platform other services were added to.

The ecommerce industry is quite young as business segments go. As mentioned above, Jeff Bezos launched Amazon.com in 1995, the same year that Pierre Omidyar started eBay (then called AuctionWeb).

In less than 25 years, ecommerce has grown to represent trillions of dollars in sales worldwide. 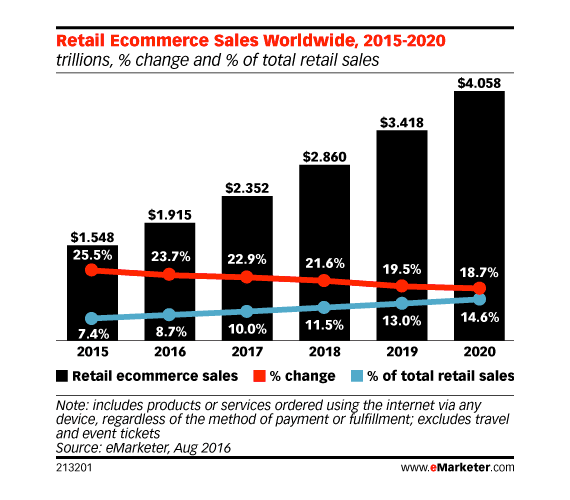 Retail ecommerce sales continue to grow, from roughly $1.5 trillion in 2015 to a projected $4 trillion in 2020, according to eMarketer.

eMarketer estimated that retail ecommerce sales will reach $2.35 trillion globally by the end of 2017 and grow to about $4 trillion by 2020. Business-to-business ecommerce sales, moreover, could quadruple business-to-consumer, retail sales.

Along with ecommerce’s rise there has been a trend to omnichannel commerce.

Omnichannel commerce recognizes that consumers control the buying process and seeks to remove the barriers between potential customers and the way in which they shop.

Omnichannel doesn’t think of ecommerce and in-store commerce as separate things, but rather as two sides of the same coin.

Sales are sales regardless of whether they are made on an ecommerce-enabled website, on an online marketplace, via a mobile app, or at a pop-up shop in Times Square.

The omnichannel philosophy doesn’t think of ecommerce as a hub or a platform, but rather as one sales channel extending from a desire to provide a better customer experience.

This philosophy is impacting ecommerce software. For at least some companies, it does not make sense for an ecommerce platform to house product and customer information that needs to be shared with so many other systems, such as physical point-of-sale setup or a marketing automation provider.

The Return of the Shopping Cart?

This could change. Software development has come a long way. Developers have tools like NoSQL databases, static site generators, application programming interfaces, GraphQL, and amazing frameworks like Laravel and React.

It has become relatively easy to build a product information manager (PIM) to feed an ecommerce website, a marketplace, and a point-of-sale system. It makes a lot of sense to use a headless approach to content management systems, and generate static product pages that load very quickly.

In this present golden age of software development, it is feasible that ecommerce software will return to simply processing payments. We may even start calling it a shopping cart again.