In April 2017, I wrote about a change to AdWords — now Google Ads — affecting exact match keywords that made them, well, less exact. The change had three components:

I was not a fan of the change then. I am still not a fan because keywords are no longer an “exact match.” However, Google has now taken it even further.

Google announced the latest change on Sept. 6, 2018, in a post in the Google Ads Help documentation. The post stated, in part, “exact match close variants will begin including close variations that share the same meaning as your keyword.” This was accompanied by a graphic, below, with an example using “yosemite camping” as the keyword.

Google Ads reported in September that “exact match close variants will begin including close variations that share the same meaning as your keyword.” This example from Google is for the keyword “yosemite camping.”

As pointed out by search practitioner Brad Geddes, even these changes show a bias. There could be multiple intents behind a query such as “yosemite camping,” including information about bears, permissible camping locations, camping policies, and permit rules, among others.

Assume you’re an outfitter who arranges camping trips in Yosemite National Park. If you’re bidding on the keyword “yosemite camping,” what do you put in your ad copy? If you look at Google’s example, you can safely assume that people are looking for campgrounds or campsites and therefore you would include information about how you arrange that for your prospective clients.

But what if they’re looking for information on the best time of year to go? Or whether they need a permit? Or if recreational vehicles are allowed?

If the ad copy is focused on campgrounds and campsites, the outfitter likely misses a lot of clicks from these searches because ads do not seem relevant.

With the change, however, Google is now deciding which keywords should enter an auction and the ads that go with them.

My first reaction is to use negative keywords to sculpt a query to the appropriate ad group. For example, use “permit” and “permits” as negative keywords in all ad groups except the “Yosemite Camping Permits.” Then, repeat this for all ad-group themes to inform Google on the keywords and ads that a specific query should trigger.

But this can quickly become a problem for large accounts. Google Ads has a limit of 10,000 negative keywords per campaign. While this seems big, a large number of possible variations could easily eclipse this limit. Using campaign-level negative keyword lists can help reduce the clutter but may require reorganizing the account to utilize them. Again, for large accounts it could be time-consuming.

Each account is different. To see how large the problem is for your account, go into the Google Ads interface and click “Keywords” in the left navigation. (Stay at the account level to see the full scope of what you’re dealing with). Set the date range — no less than one month.

Next, click on “Search Terms” in the top navigation. Then filter by match type and select “Exact match (close variant).” 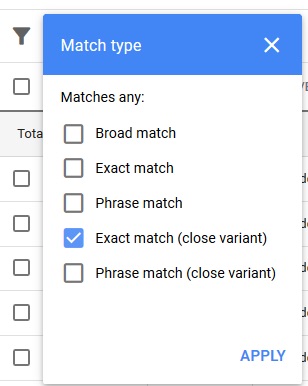 Click on “Search Terms” in the top navigation. Then filter by match type and select “Exact match (close variant).”

Google Ads should stop calling it an “exact” match when there are brackets around a keyword. Google is not honoring the word order; it’s adding and subtracting function words; and, now, Google can match queries to ads based on its machine-learning algorithm for “similar intent.” This is part of a larger trend toward machine learning in advertising. In this case, however, the machines could be wrong.