If your business has a significant number of engaged followers, Twitter can be a good way to distribute content; connect with customers and potential customers; and drive visitors to your website. The challenge, then, is to get more followers.

The pool of potential customers is large. As of Q1 2017, Twitter had about 330 million active users, up about 10 million from Q4 of last year and growing. So there is opportunity. To tap into the potential audience, take the steps needed to generate a steady stream of new and engaged followers.

Tweets with images get 313-percent more engagement than tweets without an image, according to a 2015 post from Twitter. So aim to use an image with every tweet.

You might choose to show a single product image. That is what men’s fashion retailer Suitsupply does with many of its tweets.

Last weekend we challenged you to take the next generation outdoors. Here are the results: https://t.co/0KlgSkKVZH. #ForceOfNature pic.twitter.com/yFNTHCINO0

Men’s grooming supplier Breadbrand posted an animated gif image to attract attention to this tweet inviting folks to apply for openings at the company.

WE’RE HIRING (no beard required)!!! Head on over to our careers page and get that application in ASAP. Good luck :D https://t.co/0wopetqZHY pic.twitter.com/LzMUypg0OJ

Retailer Forever 21 sometimes adds text to images or graphics to promote a sale.

Charts or illustrations work well too. This was one of my most engaging tweets from April 2017.

Twitter is the leader in hashtags, which are powerful ways to connect.

“Hashtags are such a prominent part of culture today that it’s rare to find anyone who doesn’t know what they are,” wrote Evan LePage in a March 2017 Hootsuite blog post. “In fact, the hashtag is so recognized that it was added to the Oxford dictionary in 2010 and the Scrabble dictionary in 2014.”

To help attract and engage new Twitter followers, add relevant, unbranded hashtags to most, if not all, of your tweets. Chewy, an online pet supply store, recently used the #CincoDeMayo hashtag for a relevant tweet.

You might also want to use your own branded hashtags. Roxy has been featuring surfer Lisa Andersen in some of its recent marketing. For example, her biography is on Roxy’s site.

“Lisa Andersen is a legend and the inspiration for the Roxy brand,” the biography begins. “Her feminine style and athleticism laid the foundation for modern women’s surfing in the 1990’s, and she’s still carrying the torch forward as our worldwide ambassador.”

The company has also created a hashtag, #ROXYxLisaAndersen, to use on any tweets related to Andersen.

Throwing it back to 94 with this iconic moment captured by legendary photographer Art Brewer of @AndersenLisa #ROXYxLisaAndersen pic.twitter.com/JdrVklFkTM

One of Twitter’s many advantages for business is its ability to distribute content, as in content from your content marketing campaigns. So in the same way that you don’t want to just publish once on your blog and then abandon it for six months.

Lowe’s, the home improvement brick-and-click retailer, tends to post two or three tweets each day. That is plenty to keep someone engaged and not so many folks will mute your business or, worse still, unfollow your business.

Keep squirrels away from your spring vegetable garden with a dash of cayenne pepper #lowesfixinsix pic.twitter.com/qNTONV0DgK

It can be a good idea to use a Twitter client that will allow you to schedule tweets, spreading out your regular stream of good tweets over time.

Tweets do not need to be one and done. Rather, repeat the same tweet several times over a reasonable period of time. This is a tactic I use regularly in my own Twitter account. For example, I posted this tweet about critical content marketing tasks on April 13, which the day it first appeared in Practical Ecommerce.

The tweet earned 582 impressions and 18 engagements. I repeated the same tweet two days later, earning an additional 403 impressions and 6 more engagements. For the most part, I try to separate repeated tweets by more than the two days in this example. For your account, try experimenting with different intervals between postings.

If you look under the “Notifications” section of Twitter’s navigation, you’ll find a list of everyone who has recently mentioned your Twitter handle, including those who have either liked or retweeted your posts. 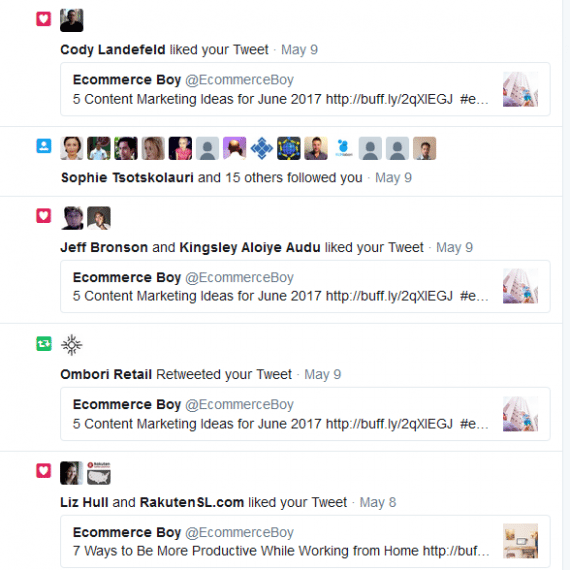 Mention Others in Your Tweets

Twitter is a good place for conversations and sharing with others, so mention users in your tweets. Shoe manufacturer Keen did this in a recent tweet, mentioning the Twitter handle of the runner featured in the post.

You might also try to mention influential accounts related to your industry segment. You can even use a mention to ask someone a question.

Remember content marketing is the act of creating content, publishing that content, and then distributing it. Twitter, as mentioned earlier, is a good vehicle for distribution. Effectively, it is a good place to promote your blog posts or videos.

Your blog posts and videos are also a good place to promote your Twitter account. This can be as simple as adding a Twitter link on your blog pages. That is what video-game apparel site Jinx does. 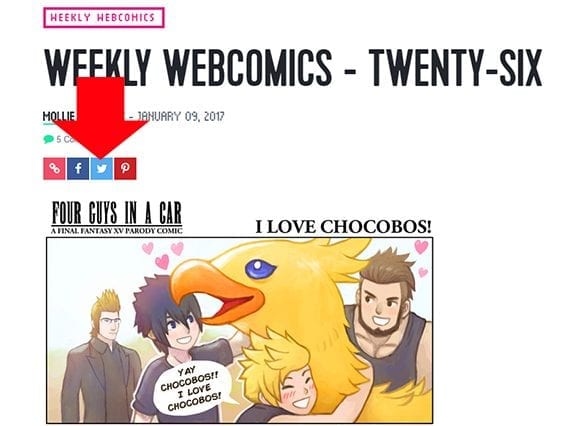