The coronavirus pandemic has changed everything. Retail shopping habits have been upended. Businesses that attract new customers and retain existing ones — right now — could recover or grow quickly when the economy reopens and moves forward.

After the Covid-19 lockdown, however, the United States and the world could still face a severe recession. On April 14, 2020, the International Monetary Fund released its economic outlook, which stated, “It is very likely that this year the global economy will experience its worst recession since the Great Depression.”

The IMF estimates that the world economy might contract 3.0 percent in 2020. “Advanced Economies” and the United States’ economy could contract 6.1 and 5.9 percent, respectively. 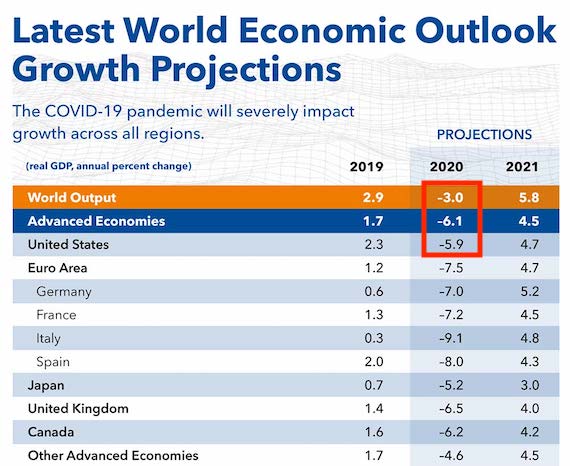 The IMF estimates that the world economy might contract 3.0 percent in 2020. “Advanced Economies” and the United States’ economy could contract 6.1 and 5.9 percent, respectively.

Not all economists are as pessimistic as the IMF, but it is generally held that after the “Great Lockdown” business activity will not immediately return to pre-pandemic levels.

This is by no means good news, but it is also not without hope or opportunity.

Promotion in a Recession

In 2009, Gerard J. Tellis and Kethan Tellis, professor and student, respectively, at the University of Southern California Los Angeles, surveyed (PDF) more than 40 studies that examined the relationship between promotion and performance during and after a recession.

The Tellises’ review looked at both the quality of the reports surveyed and the subsequent results.

Kamber study. For example, in 2002 researcher Thomas Kamber studied the performance of 822 companies after the recession of 1990 and 1991, finding “that the group of companies that maintained or increased their ad spend had larger sales growth than those that cut their advertising,” according to Tellises.

“Those [businesses] that maintained or increased advertising had 7 percent annual growth in sales in 1991 [which was during the recession] compared to non-existent growth for the companies that decreased their advertising expenditures. This gap in sales growth between the two groups widened to 25 percent by 1995.” 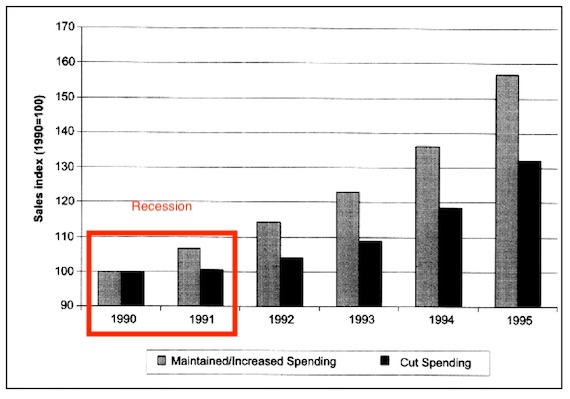 McGraw-Hill. A McGraw-Hill study from 1985 looked at how the recession in 1981 and 1982 impacted 600 business-to-business companies.

“All firms increased sales for up to six years following the first year of the recession,” wrote the Tellises. “However, firms that did not cut their advertising over both years of the recession had sales that grew to almost 340 percent by year six. In comparison, firms that cut advertising in either one or both years had much more modest increases in sales that grew to a little over 200 percent by year six. These results provide strong evidence that not cutting advertising during a recession helps to keep sales growth at a high level.” 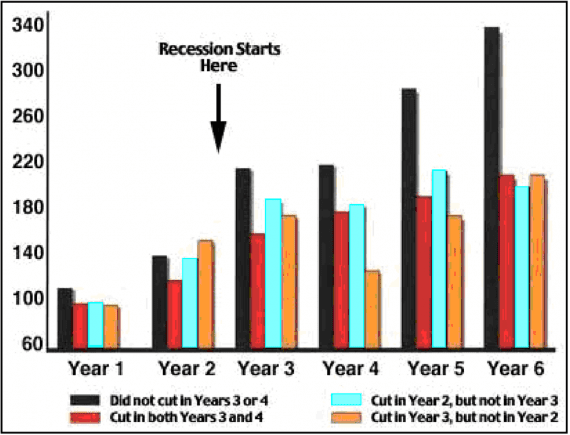 The McGraw-Hill study demonstrated that marketing and advertising during a recession could lead to relatively long-term growth. Source: Tellis study.

Meldrum and Fewsmith. A similar study in 1979 conducted by Meldrum and Fewsmith, Inc., an advertising agency, looked at the sales performance of 143 firms from 1972 until 1977. Those businesses that continued to advertise during the recession of 1974 and 1975 had much higher sales at the end of 1977.

This particular report may not be as convincing, Tellis and Tellis noted, because those companies that continued to advertise during the recession had already shown improved sales leading up to it.

According to that report, “companies that master the delicate balance between cutting costs to survive today and investing to grow tomorrow do well after a recession. Within this group, a subset that deploys a specific combination of defensive and offensive moves has the highest probability — 37 percent — of breaking away from the pack. These companies reduce costs selectively by focusing more on operational efficiency than their rivals do, even as they invest relatively comprehensively in the future by spending on marketing, R&D, and new assets.”

These studies should be encouraging even in the current state of the economy. Persistent promotion (coupled with reasoned cost-cutting) tended to precede revenue growth in companies that survived and thrived through a recession.

That growth, in turn, could have come from either increased sales to existing customers or from new customers acquired, perhaps directly, as a result of recession-time marketing and advertising.

The takeaway for many businesses — including pure-play ecommerce operations, omnichannel retailers, and B2B firms — is to keep promoting, keep communicating. Continue to attract, engage, and retain customers now and after the coronavirus lockdown.

Even the IMF’s gloom projections contained a bright spot: the U.S. economy could rebound by 2021, with 4.7-percent growth. And that’s just eight months away.