PageRank: What Is It? And How Do You Calculate It?

PageRank is a proprietary algorithm — a mathematical formula — that Google uses to calculate the importance of a particular web page based on incoming links. The algorithm assigns each web page a numeric value. That value is the URL’s PageRank.

The underlying assumption is that links are analogous to “votes” for a page’s importance. The more votes a page has, the more important it is. And votes from important URLs have more weight than votes from unimportant ones.

In this post, I will (i) discuss why PageRank is important and (ii) explain how to use a simplified PageRank calculation to make sound SEO decisions about internal linking. In all, this article should give you a foundational understanding of this ranking system. And in future posts, I will build on this PageRank information and apply it to SEO techniques.

“Using PageRank, we can order search results so that more important and central Web pages are given preference. In experiments, this turns out to provide higher quality search results to users,” wrote Google’s founders Larry Page and Sergey Brin (along with Rajeev Motwani and Terry Winograd) in their January 29, 1998 paper, “The PageRank Citation Ranking: Bringing Order to the Web.”

Despite this paper and the complex calculations it included, Google’s exact recipe for ranking web pages is not public. But there is enough data available to make some educated guesses and assumptions about the PageRank algorithm and a search engine’s basic procedures.

Our assumption goes like this. Jack starts a search for the phrase “golf clubs.” Google first seeks relevant pages that include content matching Jack’s query. Once Google has located the relevant pages, it ranks those pages based on importance — that is, PageRank. The first page listed on the Google results page had the most PageRank out of all the pages relevant to Jack’s search query. The last page listed had the least.

Good content that matches a search query determines whether a given page will be included in Google’s results. But PageRank determines the order relevant pages are shown.

PageRank is important, then, because it will determine if your site shows up first or last when a potential customer searches for your products.

Google’s search process is as follows:

Google does not disclose its exact PageRank formula. But it is a pretty safe bet that calculating PageRank is not easy math.

The folks at SEOmoz have come up with an excellent guess about the PageRank algorithm in the paper, “The Professional’s Guide To PageRank Optimization.” The paper helps site owners know how to estimate a page’s actual Google PageRank and don’t mind spending $39.99.

But when it comes to making certain good choices about SEO (particularly internal linking choices), you don’t really need to know a URL’s actual PageRank. Rather, a simple model that estimates the effect of one SEO strategy or another is just as good. For example, you’ll be able to compare two different internal linking strategies, estimating how each one will affect a page’s ranking, without having to employ higher mathematics. 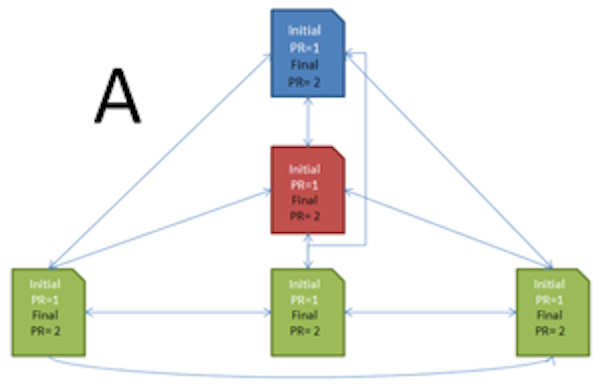 Three hypothetical products — Blue, Red, Green — would each have an initial PageRank of 1.

A link from Red to Blue would effectively be a vote for Blue’s importance, and that vote would increase Blue’s PageRank to 2 — Blue’s initial PageRank plus the value of Red’s vote. Red’s vote is worth its PageRank and is called “ranking power.”

With just this simple model, we can now start to test SEO tactics for internal linking. Plot out two or more scenarios, adding up each page’s PageRank to determine which tactic will work best for a given goal.

What is the best navigation strategy if your goal is to boost your category page’s rank? Interconnecting every page would give the category page a total PageRank of 2, as in figure A above.

Linking (green) product pages to the (red) category page only, as shown below, would result in a PageRank of 5 for the category page, making it the better choice. 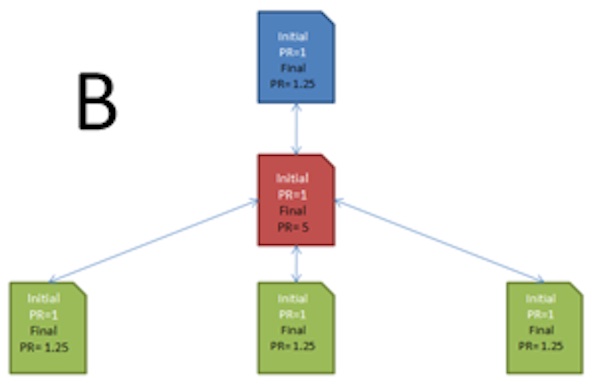 Linking (green) product pages to the (red) category page only would result in a PageRank of 5 for the category page.