Syndicating blog posts, press releases or new product announcements can be time consuming, especially when you consider the number and types of channels available. Further, many small ecommerce merchants do not have the internal resources to effectively promote such content. They may post to a Facebook page and Twitter account, but are not able to easily syndicate on a wider basis. Content distribution platform provider dlvr.it has created an application called Promoted Stories that is intended to make that job less demanding. 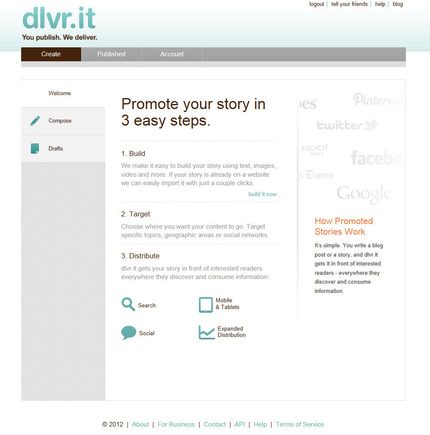 Promoted Stories is similar to dlvr.it’s other product, dlvr.it Social — see “Automating Social Media Posts with Dlvr.it,” our previous article — in that it automates the syndication process. It differs in the number of channels to which the platform distributes content, going beyond social networks like Facebook and Twitter to include blogs, RSS feed subscribers and even news sites like Google News, CNET and Reuters.

Unlike dlvr.it Social, Promoted Stories is not free. Costs range from $9.95 to $29.95 per story depending on the level of distribution needed. At the time of this writing, dlvr.it is running a special offer of $1.00 for the first story.

The need to facilitate distribution beyond social networks is why Promoted Stories was created, according to dlvr.it CEO Bill Flitter. “Each month two hours is spent on Twitter and six hours on Facebook. However, the average user spends 24 hours per month outside of those channels,” says Flitter. “Nielsen reports that Internet users visit 99 domains per month. We wanted to ensure that small businesses had access to sites beyond just major social networks.”

The platform works this way.

Promoted Stories formats content appropriately for the channel to which it is distributed, such as Facebook status updates, tweets, full page advertorials on 3-party sites, or as IAB ad units on relevant blogs and news sites. Content also goes into dlvr.it’s own news stream at Stories.dlvr.it.

For example, I used Promoted Stories to syndicate this Practical eCommerce article: “Putting a Dollar Value on Fans, Friends and Followers.” 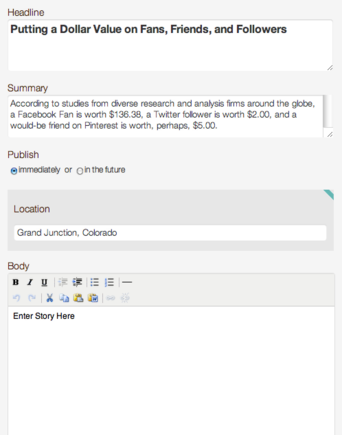 Step One. Using the Promoted Stories template, choose one of the three plan options: Basic, Plus or Premium.

Step Two. Copy and paste the article’s URL into the “Import a Story” field, which enables the platform to automatically pull in the article and populate the remaining fields. Alternatively, you can type in the content to be included in those fields.

Step Three. Choose to publish now or schedule for publication at a later date.

You also have options to include your location, copy and paste the entire article, use a pull quote, and add relevant, keyword-optimized tags.

Include featured images, videos, and contact information in the right-hand column.

In the right-hand column, you can add (a) a featured image in jpg, gif, or png versions, (b) publisher contact information, (c) other attachments such as PDFs or videos, and a link to the original source for the story.

The bottom part of the template contains targeting options, which include targeted topics, targeted regions, social networks, news sites such as Google News, and premium channels.

You can save and preview the information as it will appear on dlvr.it’s website, then publish.

Stories are optimized and submitted to major search engines, primed for sharing on social networks, formatted for reading on mobile and tablets, and, depending on the plan selected, submitted to news sites, feeds and blogs.

Once published, dlvr.it provides publishers with a range of statistics including keyword and demographic mapping and engagement tracking. Publishers can see social data such as retweets and viral pass alongs, the number of times content has been viewed, reader locations and the types of devices on which they are accessing the content.

Promoted Stories can potentially benefit merchants in the following ways.