SEO: Google’s Algorithm Hasn’t Changed, or Has It?

September has been a big month for unofficial Google algorithm changes. Business owners are seeing significant movement in both Google’s core search results and “local pack” search results, though Google isn’t admitting updates to either.

September opened with a bang, with the major ranking trend tools reporting major spikes in movement on or near September 1 and 13. These tools report on the relative stability of a core set of thousands of rankings over time, with higher levels indicating higher degrees of instability or change.

The image below shows the past 30 days’ worth of ranking change from three SEO tools: Moz, AccuRanker, and RankRanger. While the tools show different relative values, they generally agree that something occurred on and around September 1 and 13. 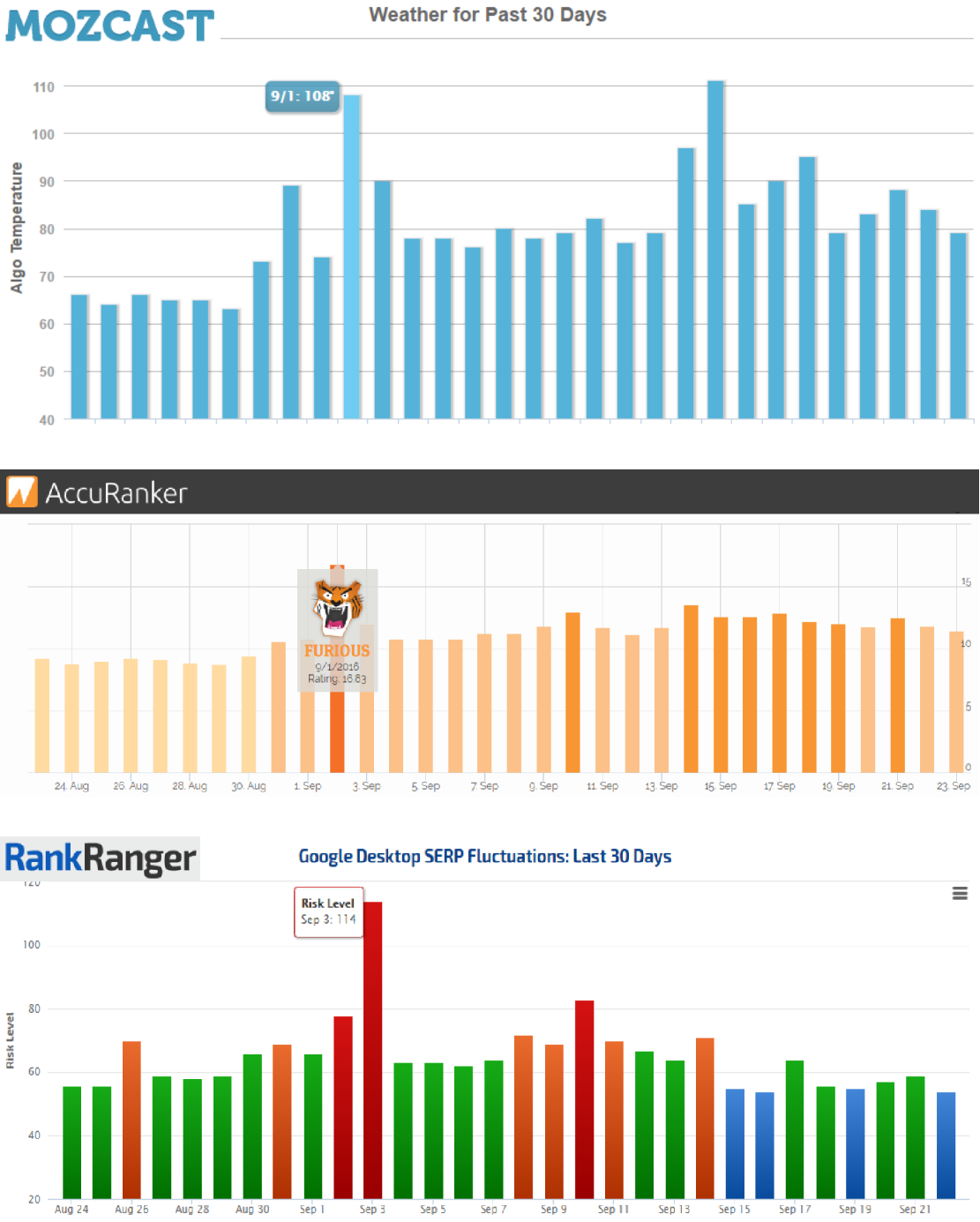 Moz, AccuRanker, and RankRanger — three SEO tools — generally agree that a Google algorithm change occurred on and around September 1 and 13.

Despite statements to the contrary from John Mueller, Google webmaster trends analyst, it’s hard to believe that no algorithm update occurred.

Google watcher and SEO professional Barry Schwartz has also been reporting major “chatter” in the natural search forums, with discussions erupting in major traffic shifts in Google. Sites are reporting significant traffic shifts both up and down.

Why do the forums matter? They’re the first place you’ll likely see discussion about any algorithm updates. Naturally, someone is always grousing about his site’s performance, but when many begin to discuss the same topic and in larger numbers, the likelihood that an update actually happened increases.

Did Rankings Changes Impact Your Site?

The only data that actually matters to you, though, is data from your own site. Rankings fluctuate. That’s life in the world of search engine optimization. But only revenue pays your bills.

Head straight to your natural search entry page report, and filter it so that you’re only looking at traffic, orders, and revenue driven by Google and natural search.

Do you see a change in performance in September that mirrors the unofficial updates on September 1 and 13?

If performance is down, can you narrow the performance changes down to a specific page or set of pages on the site? Focusing on a smaller subset of the site may help you determine what it is about those pages that Google suddenly doesn’t find palatable. Likely suspects include thin content or content pulled in from other sites, and poor internal linking structures or navigation.

If the entire site’s performance is down — if there haven’t been any recent whole-site changes like a redesign or navigation or URL changes — then look for weaknesses in your link portfolio. It’s possible that some of the sites linking to your site have been discredited, which would in turn reduce your domain’s own authority. Depending on your content model, it’s also possible that your entire site’s content has been deemed to be thin, which would also result in a widespread decrease in performance.

If it sounds like I’m talking about issues related to the Penguin and Panda algorithm updates of the past, it’s because I am. There are only a handful of known causes for widespread rankings fluctuation.

Though the Panda and Penguin algorithm updates have reportedly been worked into Google’s everflux updates — meaning that changes to rankings are supposed to be seen more gradually with the same regularity that your site is crawled as opposed to being released in batch large, disruptive updates — the severity of rankings fluctuation we’re seeing now are reminiscent of Panda and Penguin updates of years past.

Local search updates will also impact some ecommerce site owners, and Google’s rankings are showing fluctuation there as well. Dubbed “Possum” by the SEO community for the way that some business listings are hidden or filtered out, the update on September 1 affects only the local pack in Google’s natural search. Local search doesn’t appear to have had a second update on September 13 as core search did.

Search Engine Land provides a complete report of the changes in its article, but the biggest change was the addition of a new filter that Google placed on the local pack.

This new filter basically condenses the businesses that share the same name, address, or phone number into a single listing. For instance, several real estate agents listed under separate names but sharing the same professional suite of offices would now be consolidated under one name and one listing.

The update also improved personalization of local search results, making the location of the searcher more important than ever to the results shown in the local pack, and increased the chances of being found for searches when the business is located outside of city limits.