In its never-ending quest to improve search results, Google is extending natural language processing to “passage indexing,” ranking individual sentences or phrases within a page.

Google addressed this latest update in an October 15 blog post. The update will impact an estimated 7 percent of its search queries worldwide. It centers around Google’s ability to surface answers to complex informational search queries, such as those looking to understand the difference between two things or how to do a specific task.

In the example below, Google’s results on the left for “How can I determine if my house windows are UV glass?” consist of the traditional 10 blue links. At right, by applying passage indexing, Google shows in a featured snippet a section of text on a page that’s most relevant to the question. 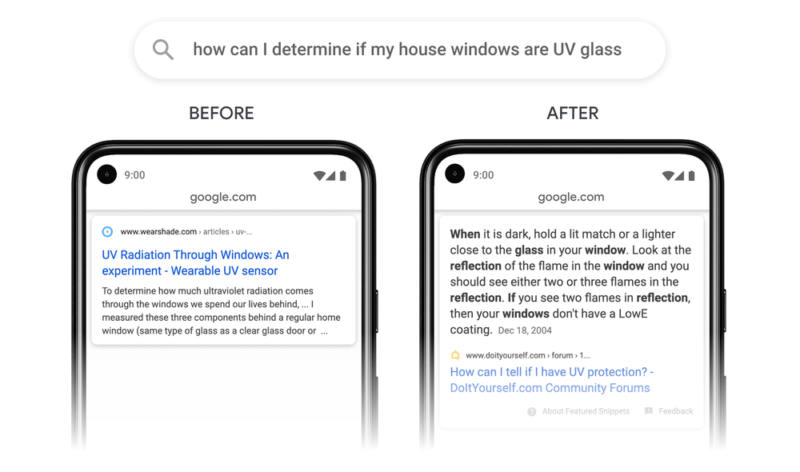 Featured snippets — also known as answer boxes — are not new. Google has displayed featured snippets since 2014. Google’s aim for passage indexing is to improve search results for complex queries and return specific answers in those snippets.

In essence, passage indexing builds on Google’s 2019 BERT algorithm update, which attempts to understand the intent of users’ queries.

Passage indexing focuses on natural language and long-tail search queries. Thus longer content — articles, how-to guides — will likely benefit. But ecommerce pages could trigger passage indexing, too. It all comes down to the depth of content on a page.

In theory, Google’s update could lessen the importance of keyword themes on a single page.

Up to now, 20 frequently asked questions might have had trouble ranking if all of them were lumped together on a single page. This led to hub-and-spoke style FAQ sections that consisted of one page of questions linked to 20 pages of keyword-focused answers.

Passage indexing may enable a simpler approach — placing all 20 questions and answers on the same page — because Google can presumably rank the section of text that’s most relevant.

However, there’s a downside: Featured snippets siphon clicks from the ranking pages.

The study also found that many searchers leave without clicking on anything when a featured snippet appears. Apparently, those searchers obtained the info they needed from a snippet.

Thus sites that achieve the coveted featured snippet can expect to drive less traffic from organic search. To compensate, make impressions data from Google Search Console (Search results > Total impressions) a key performance metric, as it is in paid search. An impression in search results increases awareness of your brand.

Ideally, however, you would achieve a featured snippet and a high organic-search placement. But that requires unique search-engine-optimization techniques. For example, ranking well in traditional organic search results requires a combination of content relevance and authority measures such as links from other sites.

But featured snippets are not related to links, in my experience. Instead, gaining a featured snippet involves creating nuggets of worthwhile info within longer, relevant content. Passage indexing accelerates this practice.