Shopify announced significant changes to its ecommerce platform aimed at performance, ease of use, and empowering developers. The company also announced a new revenue-sharing model, giving app and theme creators 100% of revenue up to $1 million each year.

During a live event on June 29, 2021, called Shopify Unite, aimed at entrepreneurs and the Shopify development community, the ecommerce platform demonstrated several updates and changes, including what it termed “Online Store 2.0.”

The complete presentation, which ran for about 75 minutes, is available on YouTube.

For small business owners and managers, the most significant announcement may have been the aforementioned Online Store 2.0 or at least a portion of it.

“Today I am going to show you the biggest and boldest upgrade we have ever shipped to the online store,” said Vanessa Lee, Shopify’s online store product director. “Our goal is to give more power to developers while making it even easier for merchants to leverage that power and build their storefront.”

Shopify has rebuilt three areas of its online store, according to Lee:

Unless you are a developer, the new online editor and the forthcoming content management system will likely be the most impactful.

Shopify updated its templating language, called Liquid, which now includes an editor similar in performance to WordPress’s Gutenberg, released in 2018, or to the page editors in Squarespace and Wix.

This upgraded editor may replace some popular Shopify apps, including the Shogun page builder.

If the demonstrations Shopify shared are indicative, the new online editor will make it possible for small and midsized businesses to easily create new page templates and populate them with data without writing code — assuming the theme employed makes use of Shopify’s sections and blocks.

Netflix’s recently-announced merchandise store uses the new theming approach, for example. And Shopify has released a new theme called Dawn that is an “open-source reference theme, built for performance, flexibility, and ease of use. It uses Online Store 2.0 features, including JSON templates, which support app blocks and sections on all pages,” according to Shopify. 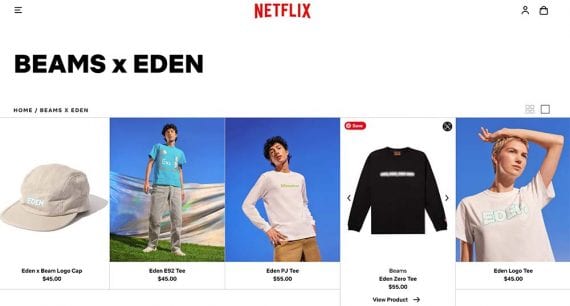 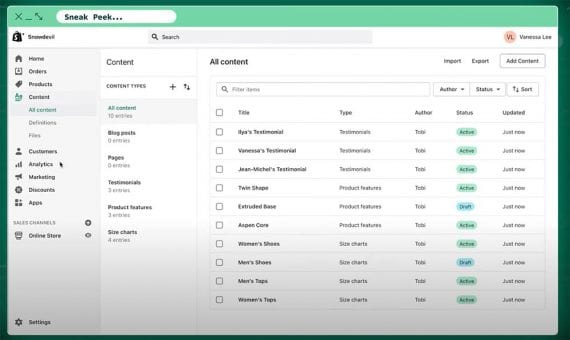 Shopify plans to give store managers more options for content.

Perhaps the second most interesting announcement at Shopify Unite was the company’s new app and theme revenue sharing model.

“We have always said we want to create more opportunities for our developers and our partners than we take for ourselves,” said Shopify President Harley Finkelstein about 57 minutes into the live event.

“The opportunities keep getting bigger. Last year our partner ecosystem generated $12.5 billion in revenue. And that number is up more than 84% from 2019,” said Finkelstein, adding, “that is four times more than Shopify made, and that is the way it should be. We only succeed when you do.”

Finkelstein went on to say that effective August 1, 2021, Shopify would no longer take any share of the revenue from apps or themes up to $1 million per year sales. After $1 million in sales, Shopify will take 15%, reducing its previous revenue share of 20%.

Although the company also introduced a registration fee for apps after August 1, 2021, the new revenue-sharing model encourages developers to create apps and themes for Shopify. It may also seek to avoid some of the app-store strife seen in mobile, such as the recent lawsuit between Epic Games and Apple.

App and theme developers heard plenty of good news, beyond the new revenue model, during the live event.

Checkout API. Shopify introduced checkout extensions, a set of extension points, APIs, and user interface components — all could be used to build apps for checkout.

Storefront API. Shopify added to its Storefront API, allowing for new cart capabilities, including the ability to pass relevant buyer context (such as country or state) with the GraphQL API and a new option to query physical store inventory to power buy-online-pick-up-in-store solutions.

Hydrogen. Shopify has a new React-powered “developer toolkit that includes scaffolding to help get you up and running with only a few clicks, and a set of React components to help you build the foundation of your commerce website, so you can focus on styling and designing the features that make a merchant’s brand unique.”