The United States Postal Service reported a $4.5 billion loss in the fiscal 2020 second quarter, which ended on March 31. Democratic members of Congress have proposed investing $25 billion to help the USPS. Whatever happens to the agency will likely impact small and mid-sized ecommerce companies.

The USPS has generated losses for years.

While some might argue that a governmental agency empowered by the U.S. Constitution and created by Congress to carry the mail to every address in the country doesn’t have to be profitable, other political and business leaders, including Gary MacDougal, who is also a director for UPS, have called for changes to or the elimination of the USPS.

“The responsible course is to set the Postal Service on a careful path to liquidation. This can be done in a way that wisely uses USPS assets, such as the 31,000 post offices, most of which are on valuable property in commercial areas, to wind the business down,” MacDougal wrote in a The Wall Street Journal editorial published on May 5, 2020. 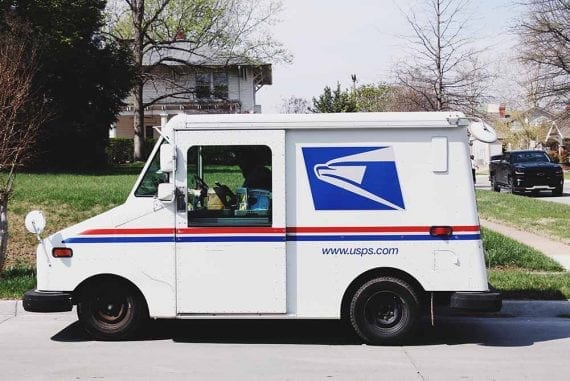 The USPS has produced billions in losses, but it is critical to ecommerce SMBs. Photo: Pope Moysuh.

How the USPS moves forward is critical for ecommerce SMBs.

“Without the services of the USPS or with a significantly altered version of the USPS than we know today, we would see significant impacts on the ecommerce landscape,” said Mario Paganini, the head of marketing at Shippo, which makes multi-carrier shipping software.

“For context,” Paganini continued, “the USPS delivers almost half of the world’s mail, exponentially more than any individual private carrier and even all of the major private carriers combined. …Without the USPS, it won’t be Amazon or other major corporations that suffer —at least not significantly. It will be small businesses and consumers that suffer the most.”

As the debate regarding the USPS continues, small and mid-sized merchants should watch for four things:

Package and envelope type. First Class Mail applies to cards, envelopes, and packages that weigh less than 16 ounces. It’s the most popular and affordable method for customers and the least profitable for the USPS. But if the agency is asked to limit its services to cut losses, ecommerce merchants will want to pay close attention to which services end up on the chopping block.

For example, in his editorial, MacDougal noted that the USPS “cooperates with [FedEx and UPS] by assuming some ‘last mile’ deliveries in unprofitable remote areas it is required by law to serve.”

Essentially, last-mile services such as FedEx’s SmartPost and UPS’s SurePost use their own networks to bring packages close to recipients, where the USPS takes over and delivers to those recipients’ doorsteps. The last mile portion of this delivery can be a significant money loser for the USPS.

But the USPS may not retain all last-mile deliveries, anyway. FedEx, for example, announced last year that by the end of 2020 all of its SmartPost packages would be delivered via the company’s own ground services.

Finally, Priority Mail — First Class Mail packages that weigh 16 ounces or more — is the most important to many ecommerce SMBs. If the USPS dropped this service, some merchants would need to alter fulfillment tactics.

USPS rates. “The USPS, for the majority of domestic deliveries — but often also international — is the most cost-effective option for small businesses. Its flagship service, Priority Mail, starts around $7 per shipment and gets most items anywhere in the U.S. in two to three days — even during the pandemic. We see roughly a 2.5-day average delivery time across the Shippo network,” said Paganini.

USPS package rates could rise. President Trump recently suggested that if the USPS is going to get additional funding from taxpayers, it will need to raise rates.

“The Postal Service is a joke,” the President said in April 2020, according to The Wall Street Journal. “They’re handing out packages for Amazon and other internet companies. And every time they bring a package, they lose money on it…If they don’t raise the price, I’m not signing anything.”

The President suggested that rates should be quadrupled.

Regardless, ecommerce SMBs should pay attention to USPS as this political discussion continues.

Delivery addresses. A third and unlikely change may impact which addresses the USPS delivers to and how often.

It seems unlikely that the USPS could stop delivering to some rural addresses. But doing so would significantly reduce costs. Similarly, the agency could save money delivering to rural routes less often, perhaps, three days per week instead of six.

This change could impact ecommerce SMBs that sell heavily into rural areas.

USPS is closed. Online sellers who depend on the USPS’s relatively low-cost shipping should also monitor the discussions of closing the USPS altogether.

“Overall, I think that in the absence of the USPS, we’d see a drop in the rate of digital entrepreneurship,” said Paganini.

“I’ve always seen selling online as somewhat of an equalizer. You don’t need to buy the most expensive real estate in your city or have the biggest spot in the mall to reach customers. Now, in the face of Covid-19, even more businesses are turning online to keep up. Without the USPS, the barriers to entry would be higher. I don’t think as many entrepreneurs and historically offline businesses would be able to transition online as easily — many might not be able to do so at all.”

“I don’t think it is accurate to say that UPS and FedEx are not helping small businesses. They are expanding their ground fleets, working to make their services more accessible to SMBs, and investing in technology and partnerships to reach more SMBs. I applaud their efforts and think that they are making the right investments. However, right now, and for the foreseeable future, no one is equipped to fill the gap that would be left if the USPS were to cease operations. Private carriers simply wouldn’t be able to keep up with the volume, nor would they be able to profitably service as wide of a net of businesses and consumers as the USPS.”