What Is Performance Marketing?

Performance marketing is a broad term that can include many forms of marketing and advertising. Its key differentiator, again, is that advertisers pay only for measurable results, which vary from medium to medium, but typically takes one of five forms, including:

Performance marketing ads can be placed in one or more channels, which are sometimes called media.

When used together, these channels are a performance marketing mix. It’s generally a good idea to employ more than one performance media or channel.

Modern ecommerce marketers will typically use these forms of performance marketing, in order. But, it can and will vary given a company’s situation.

Search engine marketing has evolved. The term once described both search engine optimization and search engine advertising. But over time, SEO has become so important that it has outgrown the SEM label.

Thus, for us, SEM describes advertising on search engines and ad networks, such as Google Display Network and Microsoft Audience Network. 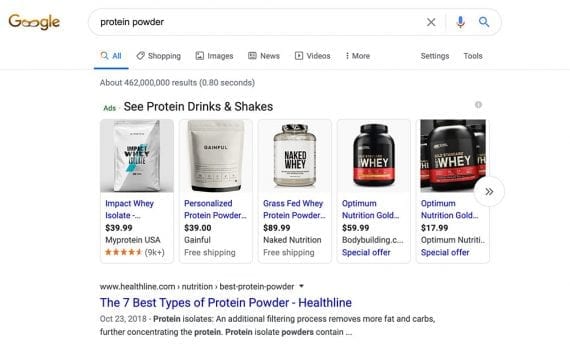 Social media advertising describes the use of social media platforms to connect with an audience of customers and prospects.

“Social media marketing” is broader than “social media advertising” since the former may also include (free) content posted to social media platforms, such as a video on TikTok. Despite this minor difference, the terms are used interchangeably.

Affiliate marketing can require more effort to manage than, say, search engine marketing since you will want to monitor how affiliates are promoting your business.

Video ads are typically purchased via the CPM model and can be an excellent way to augment and diversify a performance marketing media mix.

Programmatic audio. Audio ads inserted in podcasts, digital radio, or music streaming services are generally called programmatic audio. These ads can be extremely targeted, like most other performance marketing formats.

Digital out-of-home advertising, among the newest forms of performance marketing media, is a modern use of outdoor ads. It uses digital billboards, signs, and screens to show targeted ads to potential customers.

New or smaller ecommerce companies should likely start with search engine marketing, social media advertising, and digital display advertising. These are the most effective and easiest to use in my experience.

For example, Google Ads facilitates both search and display (network) ads. The process is simple, and, as with all performance marketing, the results are easy to see and measure.

Social media advertising, such as on Facebook and Instagram, can be particularly useful and is also relatively easy to employ.

The key is to have a level of proficiency with whatever performance channel you choose.  Start, again, with search engine marketing, social media advertising, and digital display advertising before tackling affiliate marketing or video advertising.

Channel diversity will make a business less dependent on, say, Google or Facebook, which is a good thing.

The Guide to Subscription Revenue