10 Brands on Snapchat, for Innovative Marketing

Once an app novelty for kids, Snapchat has become an established social media platform — recently valued at over $16 billion — for brands to engage 100 million followers in unique and creative ways.

Here is a list of brands that are finding success on Snapchat. Their campaigns make use of Snapchat features, like geofilter and lens, and take advantage of Snapchat’s ability to capture personal and fleeting moments. 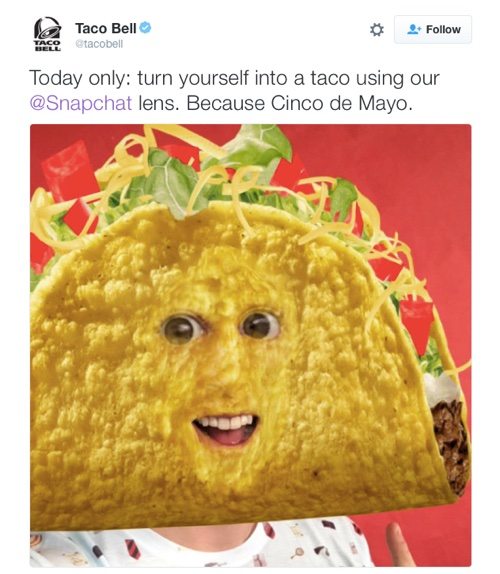 Taco Bell recently set a Snapchat record when it ran a campaign to celebrate Cinco de Mayo, generating 224 million views in one day. It launched a sponsored lens campaign that turned the heads of fans into giant taco shells. The average user played with the ad for 24 seconds before sending it as a snap. The campaign was live for one day in the U.S. 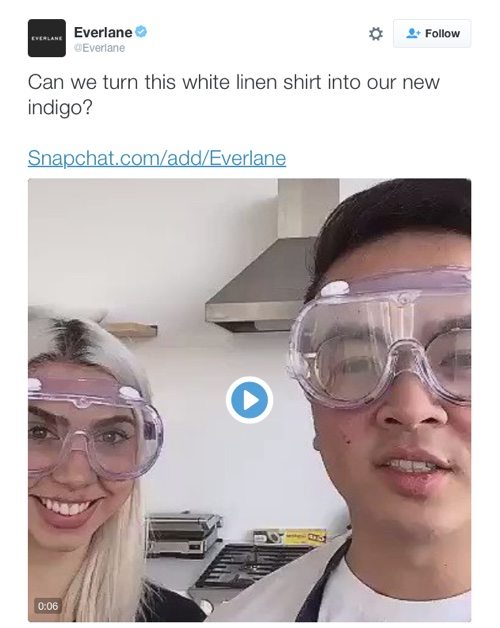 Everlane is an online apparel company with a mission to provide customers with “radical transparency” on production methods and costs. Two years ago, while many other brands were discounting Snapchat as a teen novelty, Everlane announced in its blog, “Snapchat is going to become the de facto social channel for Everlane. Over the past month, we’ve been testing it in small batches and we’re in love.”

Today, Everlane even uses Snapchat to recruit talent, encouraging job seekers to create Snapchat stories on why they’d be perfect for open positions.

In line with its transparency mission, Everlane uses Snapchat to show behind-the-scenes content, like factory tours and photo shoots. Each week, Everlane hosts a “Transparency Tuesday” segment where followers can ask Red and Isadora anything about the brand. 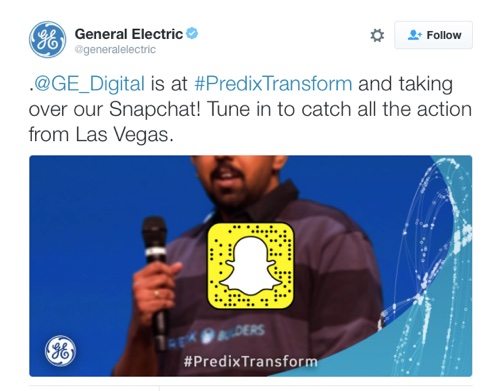 General Electric is a proficient user of social media to promote science, engineering, and innovation, along with the GE brand. GE’s global director of innovation Sam Olstein said about Snapchat, “The disappearing nature of its content encourages repeat usage and provides us with a unique way to celebrate invention with an expanding community of young fans.”

In 2014, GE created the Emoji Table of Experiments, an interactive Snapchat campaign launched with a video from Bill Nye, the science educator. Since then, the emoji science campaign has grown into a Bill Nye video series and partnership with the National Science Foundation to create downloadable lesson plans for teachers.

Recently, GE also used Snapchat’s sponsored geofilter feature to promote GE’s aviation engineering. Snapchat users within 50 major airports and 25 train stations looking to apply a filter to a photo will see a GE boarding-pass filter specific to their station. Users could then write in their destination. 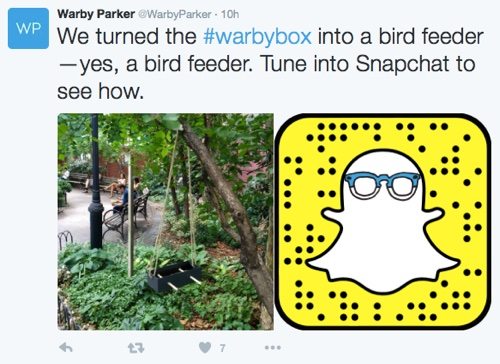 Warby Parker, the designer eyewear retailer, uses Snapchat for a variety of content, from showcasing company products (“Take a tour of our brand new Nashville HQ and Showroom on Snapchat”), to interesting do-it-yourself tips (“Did you know that your #warbybox makes the perfect portable condiment carrier? Watch us demonstrate on Snapchat”), to interactive wacky fun (“Today on Snapchat: join us for a scavenger hunt around our NYC HQ”). Many of the segments include a behind-the-scenes elements, allowing users to get a closer look at the people at Warby Parker (“Today on Snapchat: our co-founder @davegilboa is inside the secret room answering some of your questions”).

Food delivery service GrubHub has used Snapchat to promote its community with contests and promotions, engaging followers with the perfect combination of fun interactivity and opportunities to win free stuff. An early contest on the platform, GrubHub hosted a week scavenger hunt contest, “SnapHunt.” Every day, GrubHub posted a new challenge for its followers. GrubHub’s Snapchat content requires responses, and the brand is unique in its commitment to interact with nearly every message from users.

World Wildlife Fund is an adept user of social media to promote its mission to raise awareness of endangered animals. Snapchat’s disappearing elements fit with the nonprofit’s unique mission. “Be part of our Snapchat campaign #LastSelfie with the focus on endangered animals like the tiger, orangutan, and Great Panda. If we don’t act, these beloved animals will be gone in a not very distant future, just like images on Snapchat are gone after a short while.”

Major League Soccer used Snapchat to feature player takeovers. (A “takeover” is when someone else runs your account.) Each day for one week, a player hosted a takeover of the MLS Snapchat account, giving fans an inside look at star players off the field. The content featured plenty of player antics and even some drawing.

Recently Starbucks used Snapchat’s sponsored lens feature to launch its chilled summer drinks campaign. The promotion gave Frappuccino enthusiasts the ability to superimpose a fun lens over a picture of their icy beverage. 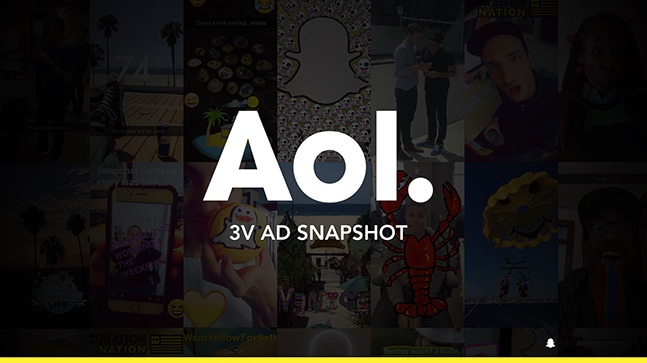 “Because Snapchat reaches over 40 percent of the millennial audience globally, we felt that this was the best avenue for talking to millennials in a meaningful way and showcase to them what it’s like to work here at AOL,” said Monica Cepak, senior marketing manager at AOL. The campaign reached 8 million users and generated 17 million views.