Reviewing the year’s best digital marketing campaigns from established brands can generate ideas for your own efforts.

Here is a list of outstanding digital marketing campaigns from 2020. The campaigns are mostly tied to Covid-19, working remotely, the presidential election, and social injustice. There are a few fun contests and games. 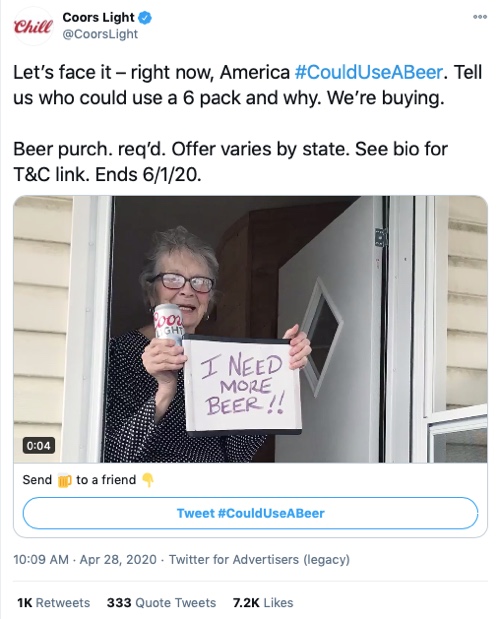 Coors Light’s #CouldUseABeer campaign gave away six-packs to any name tweeted by a follower, along with the reason. Coors gave away around 500,000 beers to grateful fans, proving once again that everyone loves free stuff. The campaign was inspired by a viral social media post of a quarantined 93-year-old woman who posted a sign in her window asking for beer, a request which Coors Light was more than happy to fill. 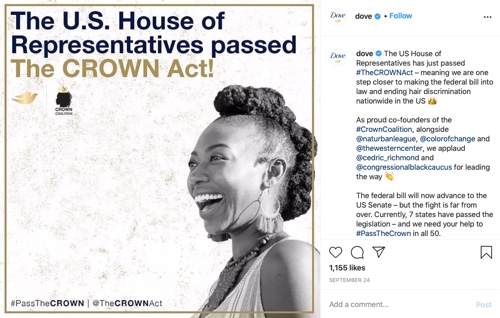 Dove co-created the CROWN Coalition (along with National Urban League, Color Of Change, and Western Center of Law & Poverty) to end race-based hair discrimination. Through the #PassTheCrown campaign, the CROWN coalition has successfully worked to pass legislation in the U.S. House of Representatives, as well as seven states. 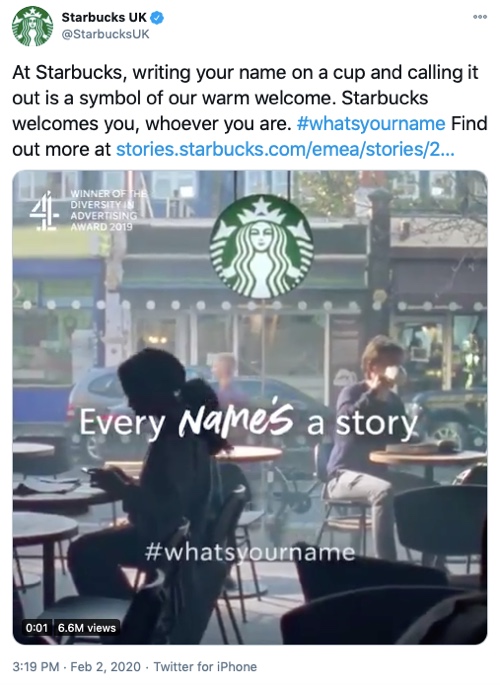 Starbucks #WhatsYourName campaign celebrates the act of taking a customer’s name, writing it on a cup, and calling it out — and the significance that act can have for transgender and gender diverse people as they use their new name in public. The campaign was inspired by real-life experiences of people who were transitioning. As part of the #WhatsYourName campaign, the “Moving Portraits” spots shared stories of how people chose their new names. Starbucks also partnered with the charity Mermaids to raise money for transgender support services through the sale of a special edition Mermaid cookie in its stores. 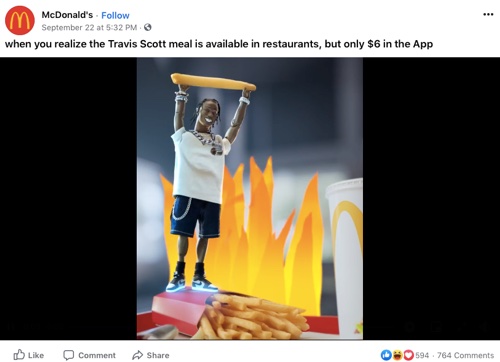 McDonald’s Travis Scott Meal became a phenomenon after it was introduced in September. Ordering the rapper and producer’s meal — a Quarter Pounder with bacon, fries with barbeque sauce, and a medium Sprite — became a TikTok trend, with customers playing Scott’s “Sicko Mode” at the drive-thru to place the order. In response, McDonald’s asked its workers to familiarize themselves with alternative ordering methods to embrace the momentum. The meal’s origin occurred when McDonald’s noticed Scott posting on Instagram about eating at McDonald’s and reached out to him.

Zoom is perhaps the greatest beneficiary of 2020’s surge in remote working. In March, Zoom ran a virtual background contest, giving away prizes to the most creative backgrounds on its platform. The simple, fun giveaway helped Zoom promote the platform’s core tenets — #StayConnected and #MeetHappy. 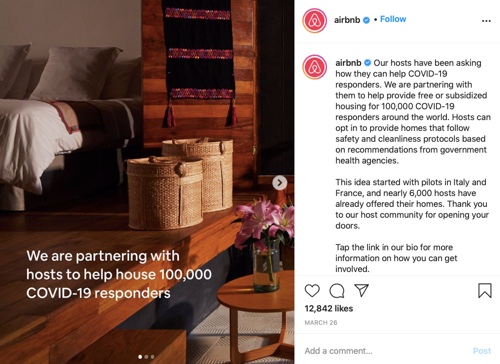 Airbnb announced a new program to allow hosts to open their homes to those on the front lines of the pandemic. In response, its hosts offered places for frontline staff in 160 countries and regions, including Paris, New York City, and London, with each offering over 2,000 places to stay. Airbnb will waive all fees on the first 100,000 stays booked through this program.

Samsung promoted its new phones with a first-person interactive game on Instagram Stories. The game is inspired by “Bandersnatch,” the popular interactive episode of Black Mirror. In Samsung’s game, the player’s mission is to safely carry the new Samsung phone to its destination, with a series of decisions to pick the right path. The game spans 20 Instagram accounts and 50 Stories. 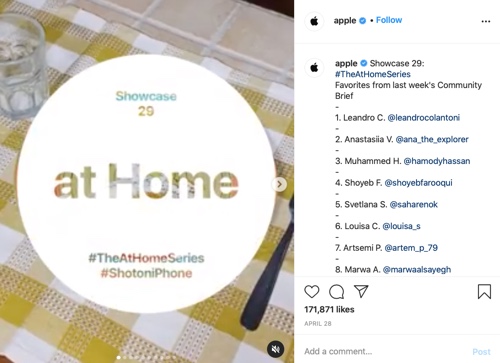 Apple launched the #ShotOniPhone user-generated content campaign in 2015. Apple’s Instagram account is dedicated to the campaign’s content, and the hashtag occurs in over 17 million posts. With this year’s Covid-19 lockdown, Apple pivoted the campaign with the launch of #TheAtHomeSeries in April. iPhone owners were challenged to create content to share their unique space and original experience. 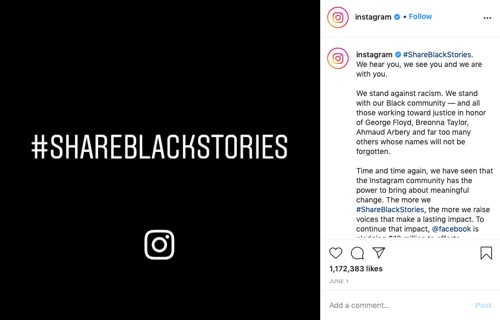 In the wake of protest over the death of George Floyd, Adam Mosser, head of Instagram, tweeted, “The stories of George Floyd, Breonna Taylor, and Ahmaud Arbery, and far too many more, are a reminder of how far we need to go and that we all have the responsibility to create change. #shareblackstories #blacklivesmatter” Using the #ShareBlackStories hashtag originally launched for Black History Month, Instagram shared weekly spotlights of black creators, such as Rachel Cargle, Texas Isaiah, Ashton Attz, Chef Paola Velez, Antonio Moore, and Shirien.

Planters sells snack foods. The 114-year old brand features the Mr. Peanut character. But in the #RIPeanut campaign, the iconic character was killed off in action-movie style. The campaign was inspired by the internet’s response to the death of Iron Man in the Avengers movie franchise. The #RIPeanut video received over 7.3 million views on YouTube, and the #RIPeanut tweet garnered over 30 thousand retweets. Fortunately, Mr. Peanut returned in the #BabyNut campaign that followed. 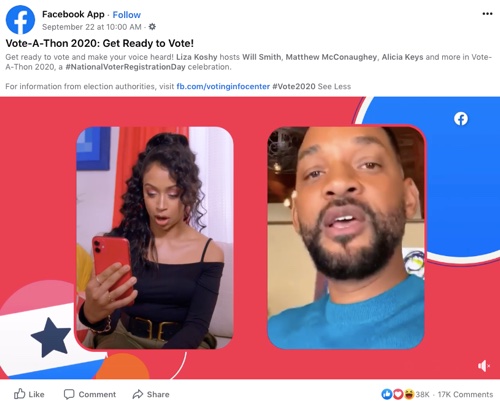 Facebook used National Voter Registration Day to run Vote-A-Thon 2020. The event was hosted by Liza Koshy, with Will Smith, Matthew McConaughey, Common, Steve Harvey, and Alicia Keys in a reimagined telethon-style half-hour video. The Vote-A-Thon featured informational games, an absentee ballot tutorial, and other infotainment segments as it attempted to register 4 million voters ahead of the presidential election. 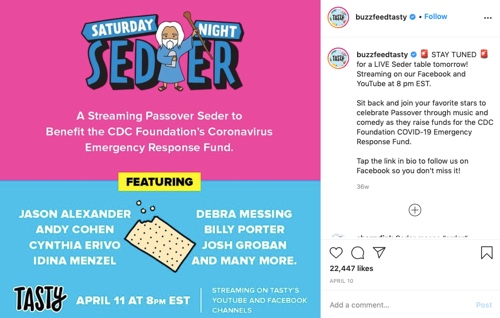 Tasty, Buzzfeed’s online food network, used the Passover holiday meal celebration to help bring remote people together. Tasty broadcast a live Seder, hosted by celebrities, with music and comedy, streamed through Tasty’s YouTube and Facebook channels. The event raised money for the CDC Foundation’s Covid-19 emergency response fund. While star-studded charity shows are far from new, this streaming event was a good way to gather people together for a shared experience, exploring the significance that food can have.