Kickstarter is a crowdfunding site to fund entrepreneurial projects in technology, design, film, art, and other creative fields. The video game project Double Fine Adventure has raised two million dollars from over sixty thousand backers, and the funding still has 19 days to go. Within the last two weeks, two other projects — The Order of the Stick Reprint Drive and
Elevation Dock — have raised over one million dollars.

Here is a list of the top money-raising projects on Kickstarter. All of the projects, except Double Fine Adventure, have completed their funding. Most overshot their goal by a wide margin. Along with the amount each project raised is the project’s original funding goal. 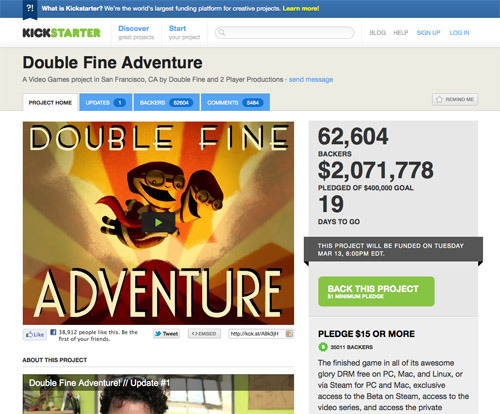 Double Fine Adventure is a project to finance a video game and then document the production of the game exclusively to the Kickstarter backers. The original goal of $400,000 was funded in just eight hours. Pledge rewards feature original artwork, lunch with the game creators, and a tour of the Double Fine studio offices. As of February 23, 2012, the project has 62,604 backers who have pledged $2,071,778. The goal is $400,000. The project funding has 19 days to go.

The Order of the Stick Reprint Drive 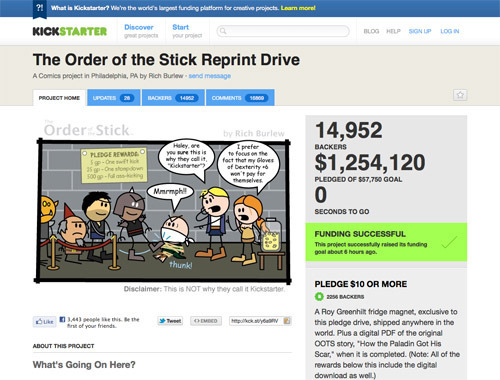 The Order of the Stick Reprint Drive.

The Order of the Stick Reprint Drive is a project to get a web comic back in print version. Pledge rewards feature the “I’m Participating” commemorative patch, OOTS coloring books, sticker sheets, the OOTS Adventure Game, signed books and artwork, and a walk-on cameo in the web comic. 14,952 backers pledged $1,254,120 — much higher than the $57,750 goal. 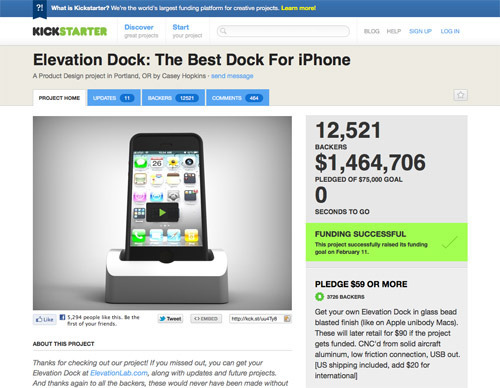 Elevation Dock is a dock for the iPhone, with or without a case. Pledge rewards feature docks in various colors and finishes, as well as discounts for large pledges. 12,521 backers pledged $1,464,706. The goal was just $75,000. 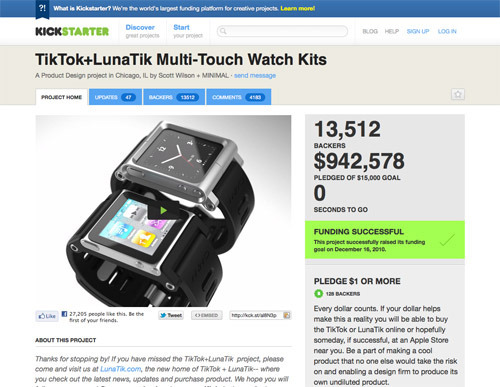 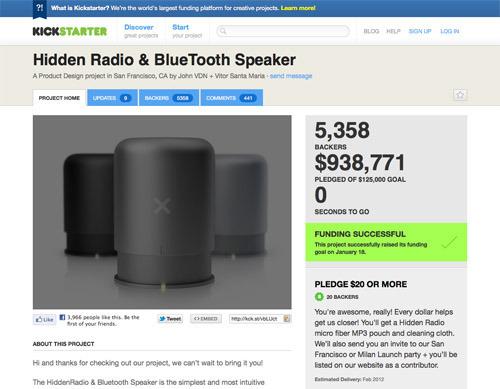 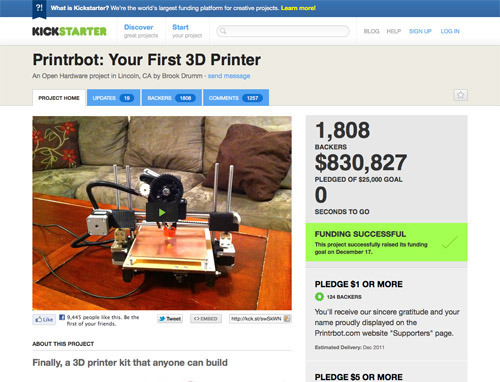 Printrbot is an all-in-one 3D printer kit that can be assembled and printing in a couple of hours. Pledge rewards feature a Printrbot kit, upgrades, and a fully assembled and calibrated Printrbot. 1,808 backers pledged $830,827, much higher than the $25,000 goal. 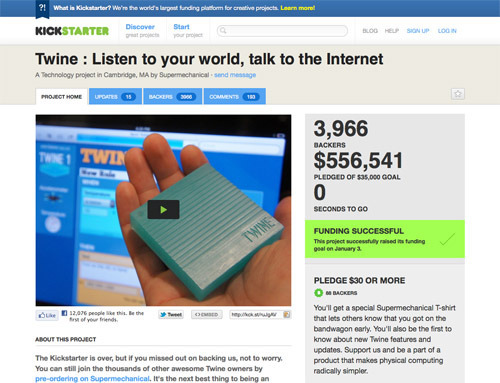 Twine is a durable 2.5″ square with WiFi, internal and external sensors. With the Spool web app, you set rules to trigger messages. Get a tweet when your laundry is done or the basement floods. Pledge rewards feature Twine and additional sensors. 3,966 backers pledged $556,541. The goal was $35,000. 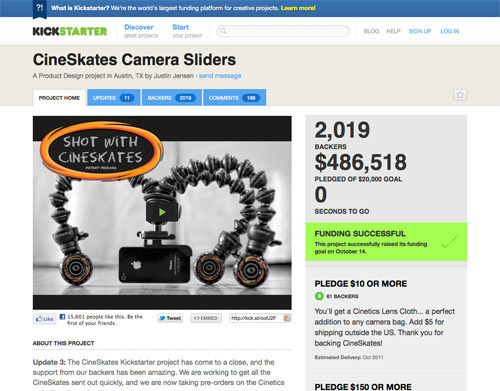 CineSkates Camera Sliders is a set of wheels that quickly attach to a GorillaPod Focus tripod to create a portable dolly system for smooth dolly video shots. The campaign launched in 2011 and filled its initial $20,000 goal in one day. The product was developed by Justin Jensen, a mechanical engineer and filmmaker. The product is now available at the Cinetics site. Pledge rewards feature priority dolly packages. 2,019 backers pledged $486,518. The goal was $20,000. 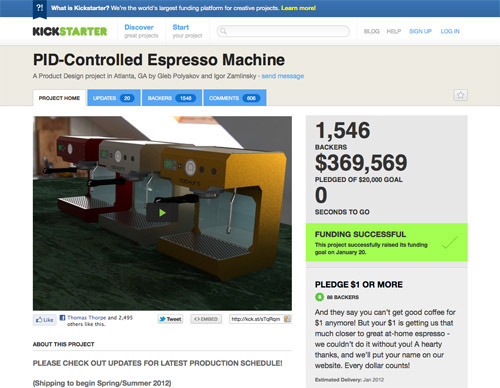 PID-Controlled Espresso Machine is a commercial-quality espresso machine at a consumer-friendly price. Pledge rewards feature the machine for $200, as well as espresso machine accessories. For pledges of $1,000 or more, the backer receives a custom built machine. 1,546 backers pledged $369,569. The goal was $20,000. 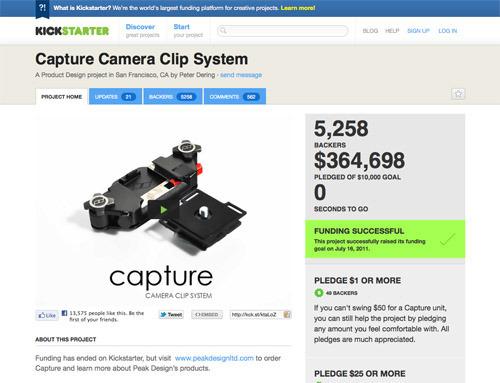 Capture Camera Clip System is an accessory for photographers that rigidly secures your camera to the gear you already own. Pledge rewards feature the clip for a $50 pledge, along with the mention that the retail price will be $70 + tax and shipping. The clip is now available for $79.99 at its website. 5,258 backers pledged $364,698. The goal was $10,000. 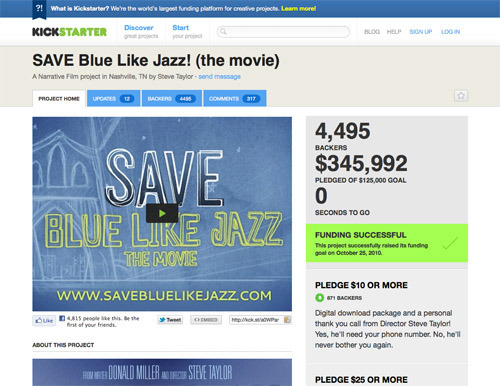 SAVE Blue Like Jazz! (the movie) is a movie production based on a book. Pledge rewards feature producer credit, appearance as an extra in film, personal voice mail greeting, and pre-release film screening and book reading in the backer’s home. 4,495 backers pledged $345,992. The goal was $125,000. 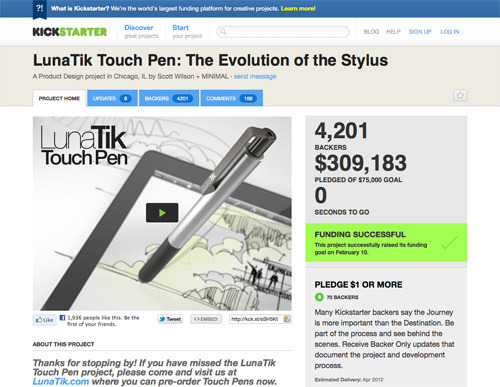 LunaTik Touch Pen is a pen that integrates a rollerball ink pen with a digital stylus for tablet computers. The designer is Scott Wilson, who also launched the TikTok+LunaTik Multi-Touch Watch Kits on Kickstarter. Pledge rewards feature the pen in alloy and colored plastics. 4,201 backers pledged $309,183. The goal was $75,000. 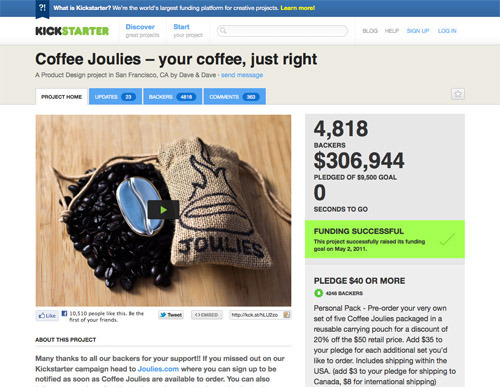 Coffee Joulies are large stainless steel beans that go in your cup to keep your coffee hot longer. Pledge rewards feature the Joulies and a “I backed Joulies on Kickstarter” travel mug. The product is now available on the developers’ website, which sells the Joulies in a gift pack with a travel mug and carry pouch. 4,818 backers pledged $306,944. The goal was $9,500. 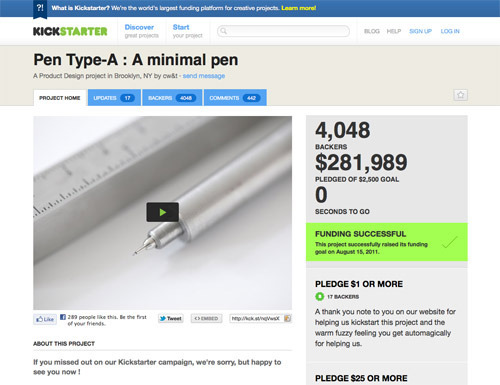 Pen Type-A is a stainless steel replacement for the Hi-Tec-C pen’s plastic housing. Project designers Che-Wei Wang and Taylor Levy state their intention, “With your support, we’d like to gather enough pre-orders to cover the tooling costs to get this pen into your hands.” Pledge rewards feature the pen and drawings by the designers. 4,049 backers pledged $281,989. The goal was $2,500. 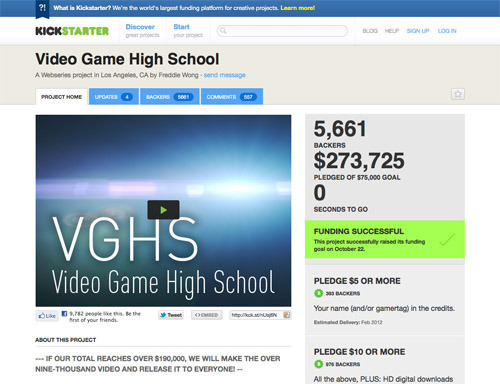 Video Game High School is a feature-length action comedy web series — 9 episodes, 10 minutes per episode. Pledge rewards feature downloads and DVD/Blu-ray copies, a Skype call with the filmmakers, and a co-producer credit. 5,661 backers have pledged $273,725. The goal was $75,000.