With its many experts and evangelists, Twitter is a good place for an online merchant to get help growing a business. The challenge is figuring out whom to follow.

Here is a list of Twitter feeds for online merchants to find useful information on all aspects of ecommerce and entrepreneurship. There are experienced merchants, ecommerce platform advocates, experts in social media and search, ecommerce technology officers, researchers, and startup gurus.

Also be sure to follow us @PracticalEcomm, as well as the feeds of our own expert contributors like @ecommerceboy, @pamelahazelton, and @KunleTCampbell.

Linda Bustos @Roxyyo. Linda Bustos is director of ecommerce research at Elastic Path, an ecommerce platform. Bustos also writes the popular GetElastic blog. Prior to joining Elastic Path, she worked agency-side, specializing in usability and search engine optimization. Her tweets are helpful for anyone who wants to grow an ecommerce business. 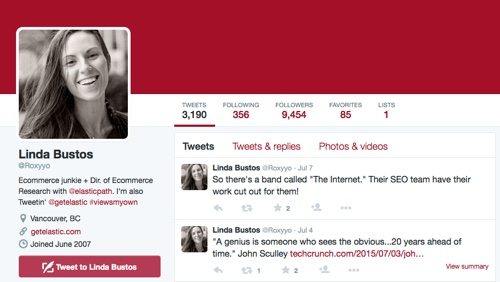 Tim Ferriss @tferriss. Author of The 4-Hour Workweek, Tim Ferriss is a resource for merchants to develop mental toughness and gain confidence to start new ventures. Host of The Tim Ferriss Show, he deconstructs pro performers from eclectic areas — investing, chess, sports — to find useful tools, tactics, and tricks for us all.

Mark Hayes @allsop8184. Mark Hayes is director of communications at Shopify. He’s also the co-author of The Ultimate Guide to Dropshipping. He tweets posts from the Shopify blog, as well as content for entrepreneurs and emerging brands. 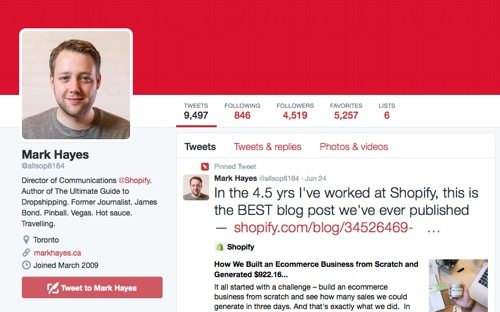 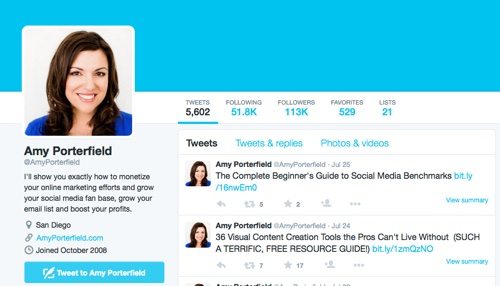 Danny Sullivan @dannysullivan. Danny Sullivan is a founding editor of Search Engine Land. He writes about all things all things digital marketing and search marketing. Get useful insights on SEO, search engine marketing, Google, and social networks, as well as what’s happening, such as his recent coverage of VidCon.

Ben Parr @benparr. Ben Parr is a co-founder of a venture capital fund that coaches early-stage startups on how to capture attention and accelerate growth. He is the author of Captivology: The Science of Capturing People’s Attention. Previously Parr was the co-editor and editor-at-large of Mashable and a columnist for CNET. 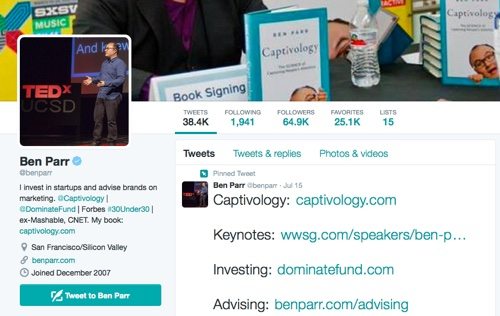 Ann Handley @MarketingProfs. Ann Handley is the chief content officer at Marketing Profs, which provides marketing training, best practices, research, and other content. Handley is author of The Wall Street Journal bestseller Everybody Writes. She is waging a war on mediocrity in content. Handley’s tweets are ideal for merchants in need of better content.

Rand Fishkin @randfish. Rand Fishkin is founder and former CEO of Moz, co-author of multiple books on SEO, and co-founder of Inbound.org. He tweets 30 to 40 times per week about marketing, SEO, technology, and startups.

Kim Garst @kimgarst. Kim Garst is the author of Will The Real You Please Stand Up and founder of Boom Social, a social media marketing firm to help small businesses, entrepreneurs, marketers, and managers. Her Twitter feed offers merchants plenty of ways to amplify and monetize social media efforts.

Drew Sanocki @drewsanocki. Drew Sanocki writes a blog about digital marketing for ecommerce retailers, from his own experience of launching and selling Designpublic.com. He focuses on workable growth hacks for ecommerce executives, as well as everything online retail, from customer segmentation to SEO. 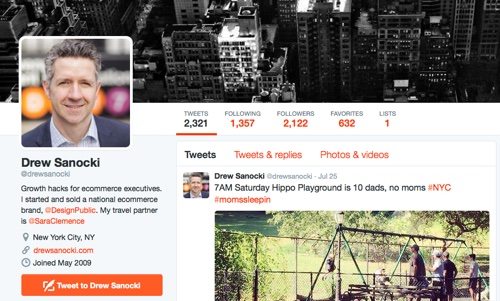 Evan Carmichael @EvanCarmichael. Evan Carmichael believes in entrepreneurs. At 19, he built and sold a biotech software company. At 22, he was helping companies raise $500,000 to $15 million in funding. Now he has a website to help entrepreneurs – he’s aiming to help 1 billion of them. His tweets will help merchants energize with tools for success.

Fred Wilson @fredwilson. Fred Wilson is a venture capitalist. He’s been one since 1986 and has been writing the AVC blog since 2003. His Twitter feed is filled with the zeitgeist of entrepreneurial culture, as well as his own thoughts on backing businesses and living in New York City.

Werner Vogels @Werner. Werner Vogels is the chief technology officer and vice president of Amazon. He is in charge of driving technology innovation for the ecommerce behemoth. Learn what Amazon’s up to. 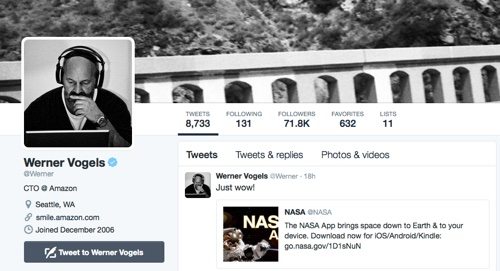