The Thanksgiving holiday weekend is one of the most important times of the year for many online retailers, with as much as 20 percent of a company’s annual sales at stake for some stores. To ensure success, retailers often rely on email to drive site traffic and sales, especially for Black Friday.

Given the importance of email marketing for this weekend in general and Black Friday in particular, one would imagine that retail marketers would do the best job possible designing email messages for Black Friday. Thus, there may be something to learn from looking at a sample of messages.

For this article, I considered 40 emails that I received from 11:00 p.m. Thanksgiving Day through the end of Black Friday. In some cases, one retailer sent more than one email. If the content was different, I considered each email. But when the content was the same and the identical email was sent a second, third, or, in one case, fifth time, I considered it just once.

Three trends emerge from this unscientific survey. First, retailers were making many offers in each email. Second, the email messages were long and required scrolling or swiping. Third, very few of the emails were optimized for mobile devices.

Pulling out all of the stops for Black Friday, most of the 40 retail emails reviewed made either multiple offers per email or made 1 offer multiple times. While counting the offers was an imperfect art — is every link an offer? no, but maybe every link with a graphic is — the 40 emails considered averaged more than 10 offers each.

To get an idea of how the offers were displayed, consider an email from Gap, the clothing and accessories retailer, touting 50 percent off everything with no exclusions. 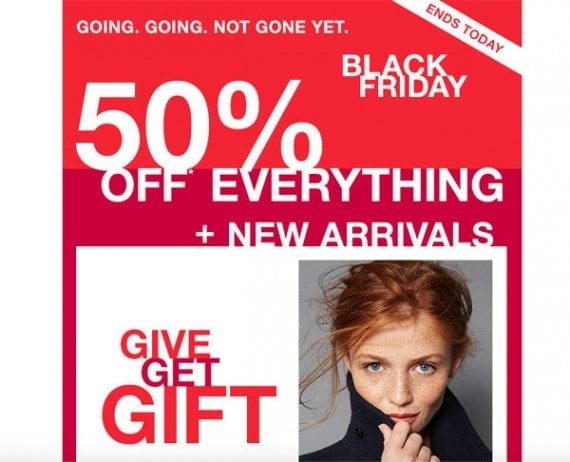 The Gap email had an overarching offer that seemed to apply to many individual images.

The top portion of the email makes the initial offer, promising 50 percent off of everything. 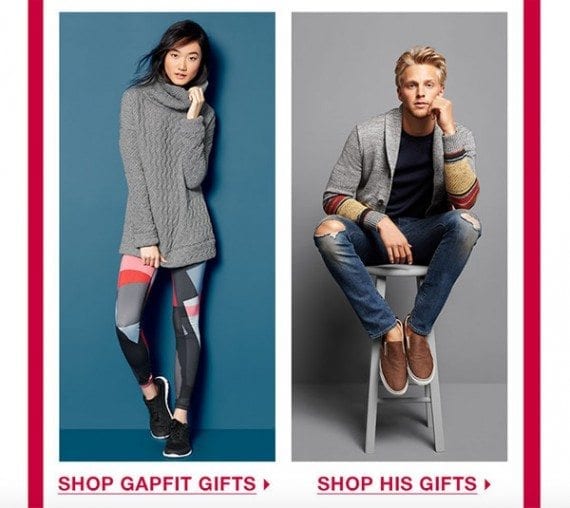 Under the heading of a general offer, Gap suggests specific categories.

As one scrolls through the email there are several links suggesting that the reader shop for specific categories. For example, there were links for “Shop Gapfit Gifts” and “Shop His Gifts.” In all, the email made 9 of these category offers, all, presumably under the aforementioned heading of 50 percent off of everything. 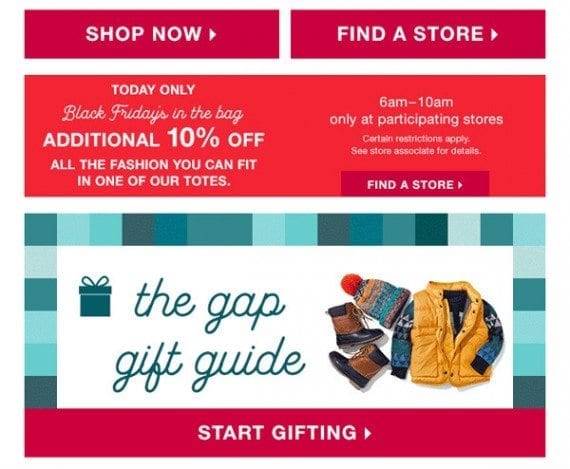 Lower still in the long email, Gap made a generic offer to “Shop Now,” and several secondary offers like getting the Gap gift guide. In all, the email made 15 offers, most of which seemed to fall under the general 50 percent off promotion.

Men’s Wearhouse sent an email on November 27, Black Friday, that made 17 offers, as another example. At the top of this email, Men’s Wearhouse included a link for a special Tommy Hilfiger suit offer. Just below the logo there was a free shipping and free return offer, and the first promotional graphic in the email touted a 65 percent off Black Friday sale. The three offers appeared in just the email’s header section. 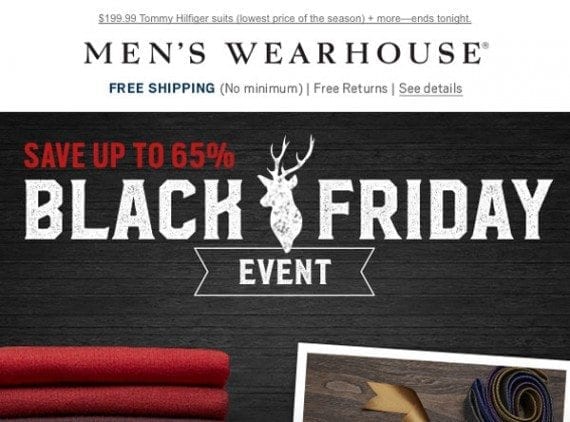 A Black Friday email from the Men’s Wearhouse makes three distinct offers at the top of the email.

Moving lower in the more than 5,000-pixel-long email, shoppers find price-point offers for individual products or product categories, like no-iron dress shirts for $29.99 or designer jeans for $49.99. 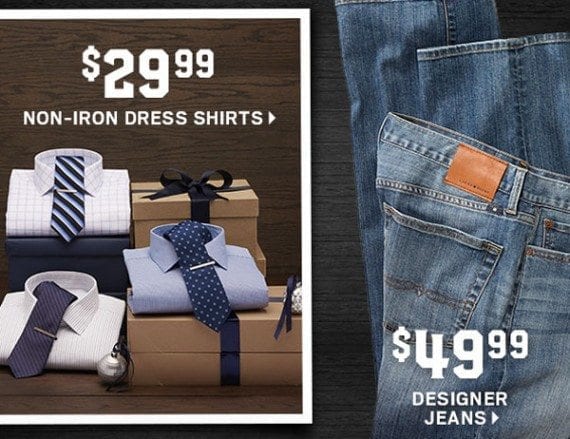 For the most part, the Black Friday emails I considered used images to promote each of the multiple offers — this trend might be to both make many offers and to fearlessly use images to sell.

For each of the 40 emails, I recorded the length of the email in pixels. This length can vary among email clients; the length assigned to each email is therefore something of an estimate.

On average, the emails were some 2,844 pixels long. If a recipient read those emails on an email client like Yahoo Mail with a 1,280 by 800 monitor, the user might need to scroll 4 or 5 times to take in the entire Black Friday email message.

The longest email considered was from MyHabit, the members-only home and fashion retailer, and was nearly 8,000 pixels long. The shortest message came from the Star Trek Store and was just 660 pixels long.

Many marketers will remember when we attempted to keep email content “above the fold,” in the reading pane. The idea was to design email-marketing messages so that the reader might see the entire message at once. Clearly this is no longer the case.

The driver for this change may be mobile. Perhaps, oddly, scrolling via a swipe on a mobile device may be easier than scrolling on a desktop, and many mobile users would rather interact with a long page rather than loading many pages.

So Much for Mobile Friendly Design

Given the rise of the mobile Internet and the associated increase in the number of consumers reading email on smartphones, one might have expected the majority of the emails reviewed to be responsive, but that was simply not the case. In fact, the opposite was true, the majority of emails were not responsive.

Just 7 of the 40 emails considered were responsive, and of these, some were barely responsive, with only minor changes to buttons.

In spite of this, some retailers did seem to be thinking of mobile users.

For example, a short Black Friday email marketing message from JYSK, a Danish retailer of household goods, was not responsive, but it featured relatively large banner-button-images that were tappable on a mobile device. 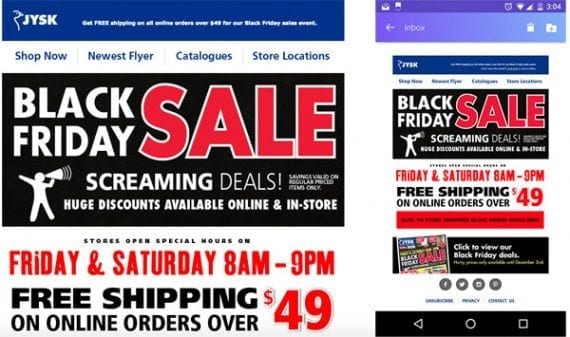 Although not responsive, this email from JYSK was still manageable on a smartphone.

Whether this was simply a function of a very basic layout or done to make it somewhat easier for a mobile user to interact with the email is not clear. It may have just been a happy accident. But, nonetheless, this email turned out alright on my Nexus 5 smartphone.

Similarly, an email from the Banana Republic Factory Store was not responsive. But the email was simple in design and the offers were relatively easy to tap. 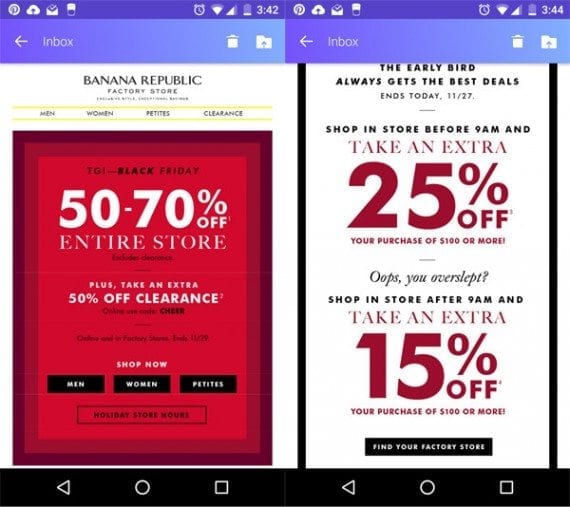 This was another example of an email that was not responsive, but worked somewhat on a smartphone.

ThinkGeek, the retailer of tech-related gear, did something interesting in one of its Black Friday emails. It had a tiny link at the top of the email, offering a mobile version. The link opened a version of the email in a web browser. This “mobile” version was responsive, but the actual email sent was not. 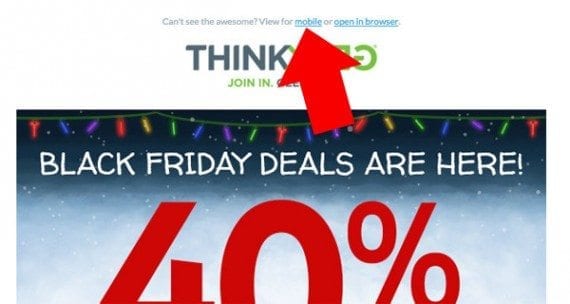 ThinkGeek offered a link to a responsive version of the email message.