Earlier shopping, ecommerce sales growth, improved email marketing, and mobile commerce will be among the most important ecommerce trends during the 2015 Christmas shopping season, which lasts from the end of October through December 24.

Holiday ecommerce sales are important for many online retailers. In some cases, small business owners might see a significant portion of total annual sales in just a couple of months. Understanding what to expect in terms of growth or trends may help with planning your holiday season.

What follows are four 2015 holiday shopping predictions for ecommerce.

1. Many Shoppers Will Purchase before Halloween

The holiday shopping season will start long before Black Friday or Cyber Monday. In fact, at least 25 percent of holiday shoppers in the United States will purchase a Christmas gift before Halloween.

Often these before-November sales are not even tracked with holiday spending. But they will, nonetheless, happen.

This prediction is not earth shattering. Rather it is a continuation of a trend, since Google reported that one in four American shoppers bought a Christmas gift before Halloween last year. And some 48 percent of shoppers had done the majority of Christmas shopping before Cyber Monday.

Year after year, online retail sales outpace retail sales overall, and 2015 will be no exception. But regardless of where a product is sold, it will be a good year for retail. 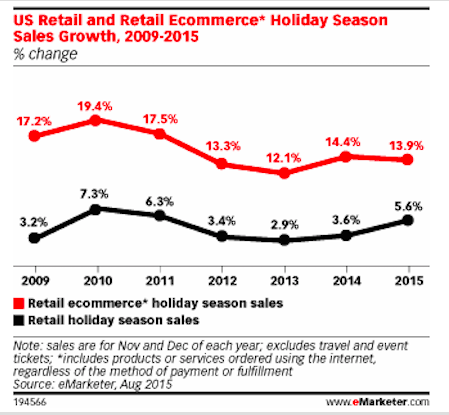 As a subset, online retail should grow 13.9 percent to more than $79 billion or about 9 percent of all holiday retail sales. While this is a slightly lower growth rate than ecommerce enjoyed in 2014, it is growth from a larger base, and is still very positive for the industry.

While this one will be a bit hard to measure, expect email, which is already the dominant holiday marketing vehicle, to become even more important in the 2015 Christmas shopping season.

Consider that a MailChimp survey from last year found that 100 percent — that is, every single one — of marketers surveyed planned to use email as part of their holiday promotions. Even companies that did not regularly send promotional emails planned to use the tool.

Two things will make email even better this holiday season.

First, expect to see more companies automate email messages, so that when shoppers make a holiday purchase they will see follow up messages that are designed to make additional sales and retain those holiday customers all year long.

Second, email marketers are getting better at segmentation and personalization, which, in turn, should make an already effective marketing vehicle even better.

Three factors will continue to push growth for mobile ecommerce.

Second, as smartphone screens get larger, mobile ecommerce becomes easier. The Samsung Galaxy S6 is 5.65 inches tall and 2.78 inches wide. The iPhone 6 Plus is 6.22 inches tall and 3.06 inches wide with a 5.5 inch HD display. On devices like these, it is simply easier to shop.

Third, mobile payment options are improving, again making it easier to shop from a smartphone.

In 2014, I offered up a list of four holiday predictions. Depending on how you grade me, I was, perhaps, spot on for two of these. I also predicted growth in mobile commerce, which did happen, although I overestimated how much growth there would be.

Earlier, in a January post, Adobe said that “retailers offering their customers the choice of either home delivery or in-store pickup fared far better than competitors that were limited to online stores only. In fact, in-store pickups on Black Friday rocketed by an astounding 40 percent compared to the average business day.”