2017 was supposedly the year ecommerce pummeled the brick-and-mortar retail sector, creating what analysts called a “retail apocalypse.” Yet, according to research firm Statista, ecommerce contributed only 9.1 percent to total retail sales in the United States and 10.1 percent globally. In other words, there is room for much ecommerce growth. However physical stores will fight back by luring customers with new approaches.

More physical store closings were announced in 2017 than any other year on record, with 6,700 U.S. stores closed by December 1, according to Fung Global Retail & Technology, a retail research firm. That number surpassed the previous record of 6,163 closures in 2008.

To combat the decline, some brick-and-mortar retailers are employing “experiential shopping” — providing entertainment and services along with or instead of physical goods, and relying more on online sales.

Ironically, online merchants are starting to either purchase or open brick-and-mortar stores and they may be more successful than traditional retailers because of the diverse ways they meet shoppers’ needs. They offer many more options, such as buying online with in-store pickup, buying online with same-day delivery from a physical store, or purchasing in a store and having products delivered.

eMarketer estimates that mobile took 34.5 percent of all U.S. ecommerce sales in 2017 and will account for the majority of online sales by 2021.

Amazon continued to dominate ecommerce in 2017, grabbing 43.5 percent of all U.S. ecommerce sales, up from 38 percent the previous year, according to an estimate from eMarketer. Amazon’s U.S. ecommerce sales topped $196 billion dollars in gross merchandise volume. This includes sales made by third parties on Amazon’s marketplace.

In second place is eBay, which is struggling to maintain market share. Its ecommerce sales are estimated to be $30.66 billion, but its share of total ecommerce sales dropped to 6.8 percent from 7.8 percent in 2016, according to eMarketer.

Walmart and Apple are tied for third place, accounting for 3.6 percent of U.S. ecommerce sales. Walmart’s online sales in 2017 increased 46.8 percent to $16.21 billion. 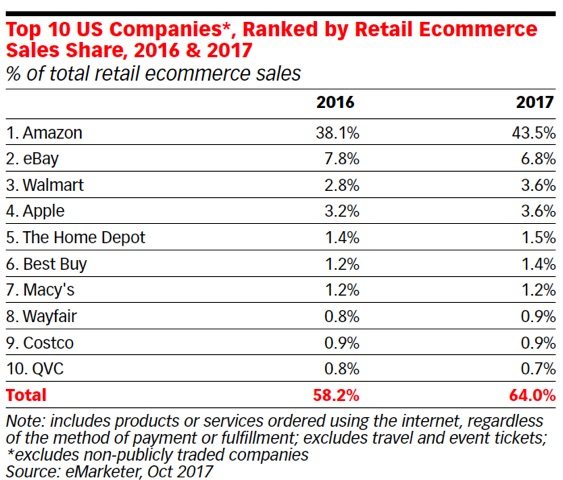 Amazon continued to dominate ecommerce in 2017, grabbing 43.5 percent of all U.S. ecommerce sales, up from 38 percent the previous year. Source: eMarketer.

Amazon controls so much of the online market that it is now challenging Google as the first place consumers search when they want to make an online purchase. Globally, electronics and computers are the most sought-after products on Amazon, according to digital marketing firm Kenshoo.

Consumer electronics was Amazon’s biggest product category in 2017, as it brought in an estimated $8.5 billion in sales, up 4 percent from 2016, according to analytics company One Click Retail. Amazon’s category with the biggest percentage increase was luxury beauty, with a 47 percent growth rate and total sales of $400 million.

More customer pampering: Greater efforts will be made to personalize product offerings and make purchasing easier both online and in-store. Products will be delivered more quickly and more ordering and pickup options will be available. Some brick-and-mortar stores will emphasize services, such as a cup of coffee, or a manicure.

Ordering via voice will become more popular via voice-assisted products such as Google Home and Amazon Echo. This method of purchasing is particularly favored by millennials. With voice-assisted shopping on Android and iPhone platforms coming soon, the opportunity for smaller ecommerce merchants to benefit will materialize.

Merchants will increase their use of chatbots, which can meet many customer service needs. Chatbots can also send product recommendations to customers.

Ecommerce vendors will spend more on technology in 2018: artificial intelligence and location-based marketing are among the most popular tools.