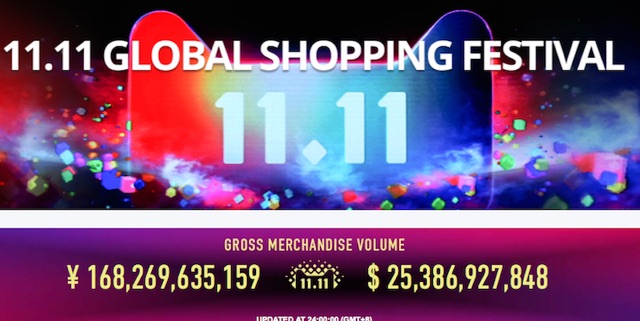 China’s Singles’ Day dates to the early 1990s, when college students celebrated “Bachelors’ Day.” The named evolved to “Singles’ Day” in the Internet era. The celebration is held November 11 — 11-11 — each year.

Started by single college students as an informal event, Singles’ Day — which occurs on November 11 each year — has become an entertainment and shopping extravaganza that now reaches to 190 countries. Written numerically, 11.11 represents “bare branches,” a local expression for single men and women.

Alibaba has gone to great lengths to make the hours leading up to the shopping event an entertainment spectacle. Major international celebrities participated in a four-hour televised party in Shanghai with Jack Ma, the founder of Alibaba, before the holiday shopping went live. Television viewers and people at the event were prompted via interactive apps to download coupons, raffle tickets, gift certificates, and other promotions.

At exactly midnight, a surge of pre-orders contributed to $1 billion dollars in sales on Alibaba’s platforms in the first two minutes and $10 billion in just over an hour.

Revenue came from both Alibaba’s Taobao consumer-to-consumer marketplace and the business-to-consumer Tmall, which hosts many major international brands. The vendors get the revenue while Alibaba makes money from commissions and “store fees” charged to brands that sell on Tmall. Taobao makes money by charging sellers for ads that boost their visibility.

China’s growing middle-class is showing an appetite for foreign goods. “More than US$25 billion of GMV in one day is not just a sales figure,” said Daniel Zhang, C.E.O. of Alibaba after the event. “It represents the aspiration for quality consumption of the Chinese consumer…”

Alibaba has cemented ties with small local stores around the country to help with logistics. Prior to this year’s Singles’ Day, Alibaba sent teams of employees to help almost 600,000 mom-and-pop convenience stores to upgrade their computer systems. Those stores, many in prime city locations, act as storage and delivery centers. By using these retail stores, Alibaba can deliver some popular perishable food items in one hour.

For example, lobster has been a big seller for the past few Singles’ Days and rapid delivery is a necessity. This kind of cooperation between online and brick-and-mortar stores is part of Alibaba’s “New Retail” strategy.

Some industry analysts suggest that the growth rate for Singles’ Day is slowing and the holiday will soon experience the shopping fatigue in the U.S. associated with Black Friday and Cyber Monday. Ma and his senior team are focusing on more elaborate entertainment and more global brands to maintain consumer interest.

Singles’ Day was the model for Amazon’s Prime Day. As for Alibaba’s strategy beyond Singles’ Day, Ma is now taking a cue from Amazon by branching out into new industries.

In a recent letter to shareholders, Ma wrote, “E-commerce is rapidly evolving into New Retail. The boundary between offline and online commerce disappears as we focus on fulfilling the personalized needs of each customer. In China, our New Retail initiatives are taking shape as the starting point to our ‘Five New’ strategy, comprised of New Retail, New Finance, New Manufacturing, New Technology, and New Energy.”