3 PPC Advertising Trends in 2015, for Ecommerce

The pay-per-click advertising industry is always changing and 2014 was no exception. There were many new features launched in AdWords and Bing Ads as well as on social platforms, such as Facebook, Twitter, and LinkedIn.

In “3 Tactics to Reassess Paid Search in 2014,” which we published a year ago, contributor Matthew Umbro suggested (a) making Google’s Product Listing Ads a priority, (b) emphasizing remarketing ads, and (c) running social PPC campaigns. As it turns out, these predictions were accurate.

In this article, I will review each of these and consider how they will impact advertisers in 2015.

The Rise of Shopping Campaigns 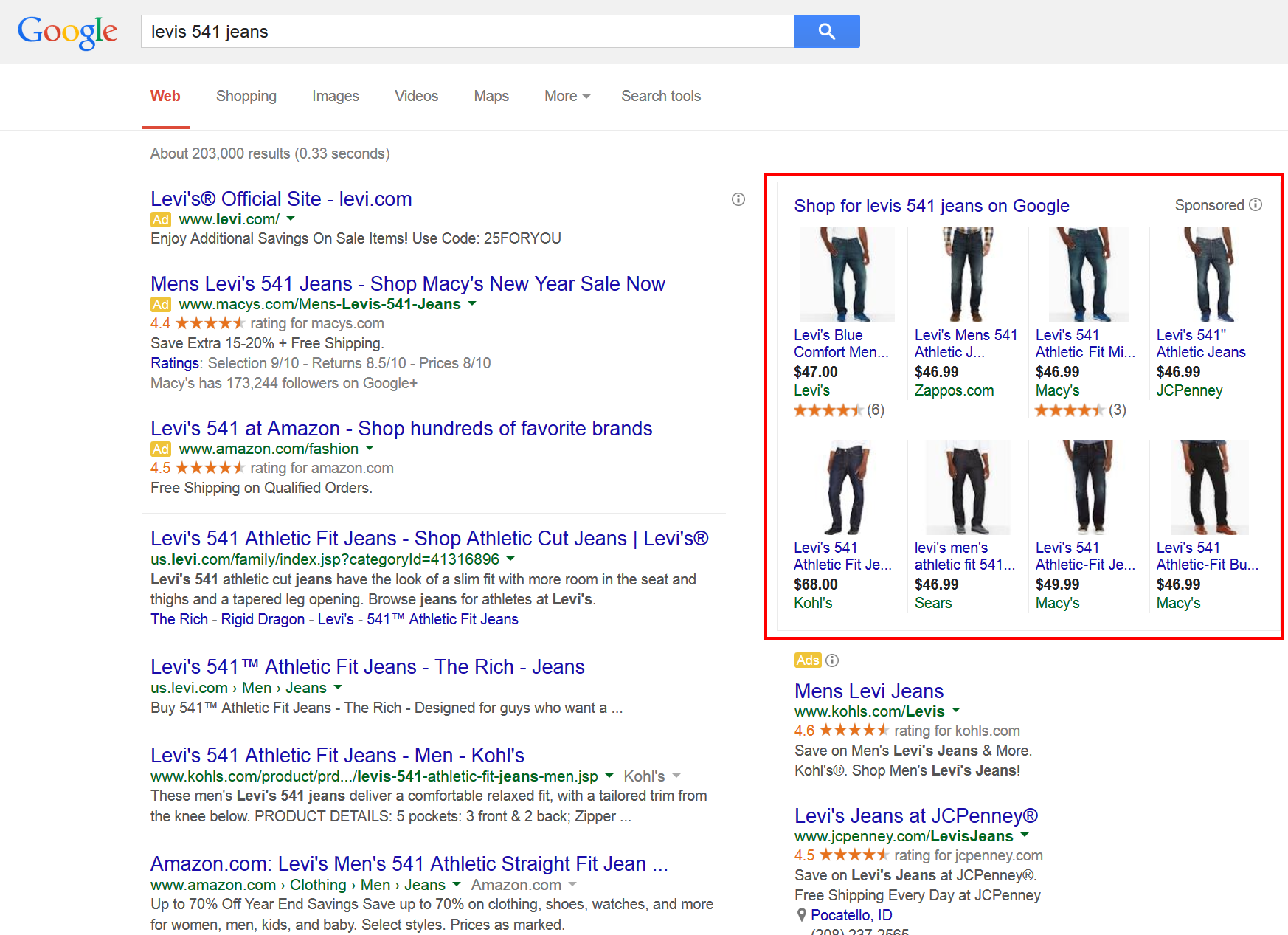 Product ads (on top right, in the red box) for the term ““levis 541 jeans,” in Google search results.

On a page full of text and blue links, the images of the Levi’s jeans pull the user’s attention. Couple that with prices and even user ratings in some cases and we can see why these ad units typically register significantly better click-through rates than their text-based counterparts.

Let’s analyze this particular search term:”levis 541 jeans.” In the product ads in the search results, at the top right, there’s an ad from Levi’s itself. This is smart bidding on Levi’s part to protect its brand. Since the price ($47.00) is nearly the same as other retailers — Macy’s, J.C.Penney, and Zappos.com — Levi’s will likely receive many clicks from this ad. Including the 4.5 star rating and the most reviews (6) makes for a very compelling listing.

Notice that the Kohl’s ad contains Levi’s that cost $68.00 — significantly higher than the other ads; the Kohl’s ad will likely not receive many clicks. Notice, also, that ads from Macy’s occupy 3 of the 8 spots — all offering the same price of $46.99. These ads use a lot real estate, but they are likely competing against each other, which could reduce their effectiveness.

In 2015, we will likely continue to see improvements and refinements from AdWords and Bing Ads around product listings — yes, Bing Ads also offers “Product Ads.” One such improvement could be keyword-level control and targeting of Shopping Campaigns.

In the meantime you can do what PPC practitioner Martin Roettgerding does to effectively get keyword level control. Roettgerding suggests creating separate campaigns for highly relevant, moderately relevant, and broad keywords by using negative keywords to exclude appropriately. You can then set different priorities for each campaign to force AdWords to show one of the other and use a shared budget between them. Thus you can bid appropriately and get effectively keyword-level control.

Remarketing ads are spreading like wildfire. That product on Amazon you were viewing could follow you on Facebook and around the web for days in the form of ads. The product will be right there in the ad unit and will reflect the current price, which frequently is lower than you remember. (See our previous article, “4 Lessons from Google’s Dynamic Remarketing Ads,” for more.)

This ability to follow a user and keep the product top-of-mind is very effective and it’s likely to get even more effective due to Facebook’s new Atlas advertising platform. Why is it so powerful? It is people-based marketing.

Facebook leverages its ubiquity, especially on mobile devices, to correctly market to an individual based on his or her Facebook profile. This way, once Facebook has you grouped into an audience, it can show you ads on any device that is logged into Facebook. Thus marketers could finally achieve the dream of cross-device advertising and tracking. Layer in the additional targeting functionality offered by Facebook and you start to how Google might be challenged.

Pay to Play with Social Media

Many companies report the loss of organic reach on social platforms. The story from the companies typically follows the same script.

Facebook is the usual example, but the same story will likely play out with Instagram (owned by Facebook), Pinterest, Snapchat, and others. These platforms are initially offered to users for free; but somebody has to pay the bills. During the early days the bills are typically paid by investors, but eventually the bill will shift to advertisers. That’s the point where it becomes pay to play.

While this seems like a tragedy to many, it’s also a big opportunity. For very reasonable rates, companies can get in front of thousands, or even millions, of people in their target audience.