A primary benefit of Google Shopping is visual. Rather than reading about a product, searchers can see an image of it. It helps to prequalify the click.

A consumer who searches for “black sconce lighting,” for example, can view the image and then click the ad. Presumably she would not click if the photo did relate to her intent.

Ads on Google have historically been mostly text. But the trend is changing. Google now offers three image-based ad formats in beta. All could help ecommerce merchants.

If the image features aren’t in your accounts, contact your Google rep or Google Ads support. The three formats are:

The new formats still require text, but images are the main draw. Thus having clear and engaging photos are crucial to higher click-through rates.

Gallery ads appear at the top of mobile search results only. Gallery ads require three headlines, visible URL paths (similar to expanded text ads), and four to eight images for a carousel. You can optionally include a short tag line of up to 70 characters, including spaces. Searchers on mobile devices can then swipe through the images for a better understanding of your products or services. 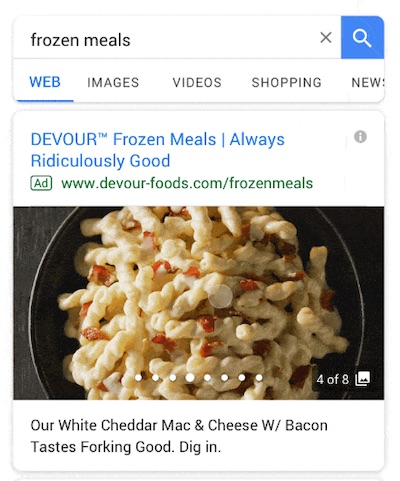 Gallery ads appear at the top of mobile search results only.

Gallery ads can be general or specific. For a broad query such as “leather couches,” the ad could show a selection of inventory. Advertisers can prequalify clicks originating from general queries.

Conversely, Gallery ads can also focus on a single product. A search for “iPhone 11” could produce an ad with eight images that showcase multiple angles and features.

Gallery ads are similar to Instagram Stories without a video. A merchant selling recliners could show images of a person sitting or reclining or sleeping. A search for “New England Patriots gear” might show images of t-shirts, sweatshirts, pants, and more. The storytelling options are plentiful.

Discovery ads utilize a combination of headlines, descriptions, and images — similar to Responsive Display ads. Discovery ads can be single-image or multiple, in a carousel, with the ability to swipe, like Gallery ads. 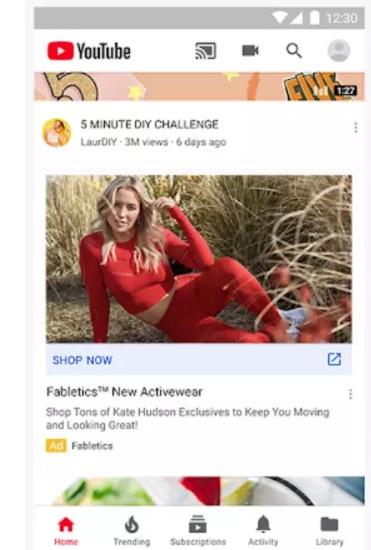 Discovery ads appear in a native format across Google’s feed-based tools, such as this example YouTube home feed.

Discovery ads are suitable for a broader range of inventory. The caveat is that users aren’t searching for the products in the ads. As with the Display Network, Discovery ads target audiences based on their interests and settings. Quality images, again, are key to enticing users to click.

I typically review the performance of Discovery ads in the framework of how they help other channels. Using Multi-Channel Funnels in Google Analytics, we can review the top conversion paths and assisted-conversions reports to determine the role of a Discovery campaign.

For example, a user may click on a Discovery ad, leave the site, and return a week later to complete a purchase. Absent the Discovery ad, the user may not have converted.

Google tested image extensions a few years ago but retired the format until now. You can use this extension to show relevant images next to your text ads. The difference with the new version is that images are now dynamic. Google pulls the images from your ad’s landing page.

The downside of this ad format is the lack of control. Advertisers cannot select the images. To me, it’s not a deal-breaker for running image extensions, but it is something to keep in mind. 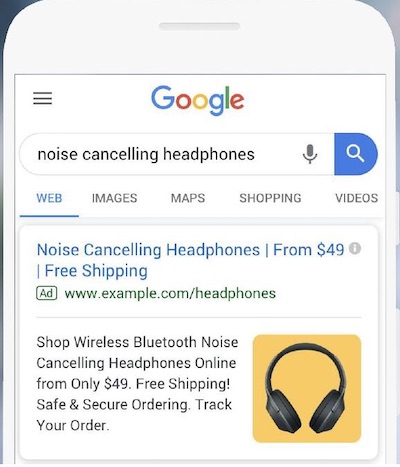