Pinterest is a fun social media service that lets users post images and videos, organized into topical boards. The site has great potential for driving traffic to online stores, but it is important not to misuse this potential or alienate users and would-be customers.

What follows are four Pinterest marketing mistakes that online marketers should seek to avoid.

Social media marketing’s mission should always be to add real value to the social communities where customers and potential customers are engaged.

In the context of Pinterest, this means that the images and videos pinned should seek to improve Pinterest, not serve as a sort of visual classified ad for a merchant’s entire inventory.

Spamming Pinterest with unwanted and uninteresting images of coupons is a great way to get folks upset. 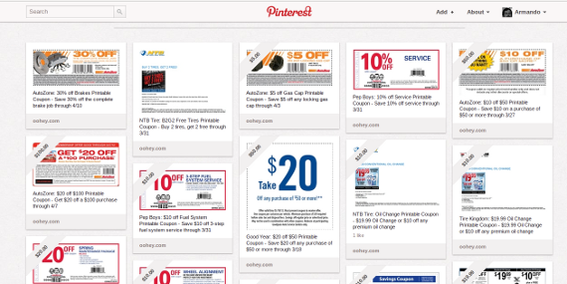 Pinterest’s visual nature means that links like coupons are probably not suitable.

Moving from one extreme to another, a second serious Pinterest marketing mistake is not ever showing products. Remember, one of the site’s greatest attractions for marketers is its potential to attract site visits. So don’t be afraid to present products. Just present those products in a way that benefits the Pinterest community.

Take, as an example, Nordstrom’s Pinterest account. The company recently added a board featuring Spring fashion trends with “Nautical Vibes.” The board includes attractive images from several different sites that actually show current nautical fashion trends. A few of the images on the board include links back to Nordstrom’s online store, where visitors could purchase one or more of the items show in the pinned image.

The statistics and projects associated with Pinterest can be staggering. For example, Shareaholic.com recently reported that Pinterest — with its 11.7 million active users — was driving more site traffic than Twitter with its more than 100 million users.

There have also been reports of users spending many hours on Pinterest daily. But Pinterest still does not have a lot of users, and most of those users tend to fall into a fairly narrow range. Modea, a digital agency, reported that some 68 percent of Pinterest users are women and that most simply repin others, meaning that the total number of influencers could be low.

Don’t make the mistake of assuming that a given set of customers is going to be on Pinterest and that by posting a picture or two, a marketer will be prospecting for new shoppers. Rather, think of the site as a way to further engage customers that may already be familiar with a merchant or the products that merchant sells.

Putting the emphasis of deepening relationships rather than necessarily attracting customers helps Michael’s.

As with any good marketing plan, a Pinterest strategy should look at the long term and big picture. Posting a few images on the site will not immediately double traffic or necessarily send sales soaring.

Instead, Pinterest marketing is an opportunity to increase engagement with some customers, building trust over a number of shared experiences — such as repinning each other’s images or exchanging comments.

After reading a list of potential Pinterest marketing mistakes — especially when that list includes items about not expecting overnight results and new customers — it is possible to be a little discouraged about taking the time to get a Pinterest program running. Don’t let that be the case. Just avoid these mistakes and be patient. Pinterest has the potential to be an invaluable part of a social media marketing campaign.