In 2017, content will continue to be one of the most important marketing tactics for ecommerce businesses. Look for content marketers to produce a greater number of videos, focus on mobile media consumption, spend more money promoting content, produce more shows rather than standalone posts, and use technology to an advantage.

Content marketing is the act of creating, distributing, and promoting content, such as blog posts, articles, podcasts, and videos with the aim of attracting, engaging, and retaining customers. For ecommerce marketers, content can be a way of building a relationship with a shopper, which in turn will allow an online store to compete not on price or delivery speed, but on experience.

What follows are five trends that could impact content marketing in 2017.

1. Video Will Begin to Dominate

Imagine it’s about 8:00 p.m. in Salem, Oregon. Melisa is visiting her daughter, son-in-law, and week-old grandson. After chatting and visiting much of the day, everyone sits down on a faux leather couch in front of the young couple’s 32-inch television.

Melisa, like many folks her age, might have been expecting prime time television or, perhaps, a show streamed via Netflix or Hulu. But instead, her millennial daughter and son-in-law turns on YouTube and starts to watch an episode of “Good Mythical Morning,” an Internet series featuring Rhett McLaughlin and Charles Lincoln “Link” Neal III.

This should not be too surprising, millennials aged 18 to 34 have shown a strong preference for digital video over traditional television.

A recent comScore and YouTube study found that about 35 percent of millennials preferred to watch YouTube compared to about 18 percent that preferred traditional television programming.

In 2017, content marketers, who already recognize this trend, will increasingly produce videos. In fact, expect video to begin to become a dominant form for some large ecommerce operations.

According to various reports, somewhere between 65 percent and 75 percent of all Internet use will come from mobile devices in 2017. Again, depending on who one asks, this might mean that a typical person will spend three hours a day on a smartphone or tablet.

While ecommerce sales will still skew a bit more toward desktop devices, shoppers are increasingly likely to consume content on a mobile device.

About 63 percent of B2BC marketers surveyed for a recent MarketingProfs and Content Marketing Institute study believed that their organization’s content marketing was either somewhat more successful or much more successful than it had been a year ago. 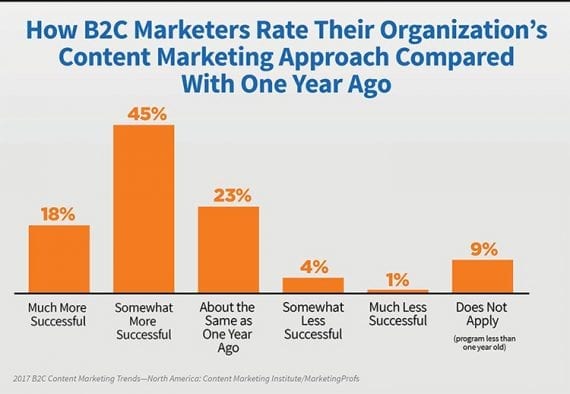 This increased confidence in content marketing should translate into an increase in its activity in 2017. Specifically, it may mean that some ecommerce marketers, or marketers more generally, will invest more in content promotion.

According to some estimates, a typical business will invest about 80 percent of its content marketing budget into content creation, allocating about 20 percent of that same budget to promote or advertise content. This may shift somewhat toward promotion.

In early December 2016, a brick-and-click retailer in the northwestern United States was busy planning the editorial calendar for its new podcast and radio show. The company recently hired a professional host, had an editor working with the retailer’s various departments for story ideas, and began selling co-op advertising to its suppliers, who want a chance to be featured on the show.

This retailer understands that entertainment and information is an important part of content marketing. If you can consistently provide an audience with entertaining information, you can build a relationship with that audience, which in turn may result in sales and profit.

In 2017, marketers who admire the success of popular YouTube shows or podcasts may begin to release their own, episode-based content.

According to Ted Karczewski, content marketing manager at Skyword, a content platform provider, episodes have at least two distinct advantages.

First, the need to develop an ongoing series of episodes will force the content marketing team to develop a better, clearer, and more organized content plan. This increased focus should lead to increased success.

Second, “your audience grows accustomed to the style of information you’ll be providing…that expectation sticks out in their memories. The more [episodes] you produce around a series, the higher [number of] returning visitors you’ll see month-over-month,” Karczewski wrote.

In 2016, some content marketers began to experiment with machine-generated content. These innovators were, for example, trying to produce product descriptions from a list of product specifications.

While this is still far from taking hold, it was a significant topic of discussion at important industry events, like Shop.org’s digital summit.

Next year, look for machine-generated content to continue to evolve under the heading of artificial intelligence.

Artificial Intelligence could take several forms as it relates to ecommerce content marketing, including automated translation, predicting what to write about, or even offering personalized content experiences.