As we look to 2015, what social media marketing trends are likely to develop? Here are six that online retailers should monitor.

Mainstream social networks like Facebook, Twitter, and LinkedIn will face challenges from lesser-known upstarts in 2015. One example is Ello, an ad-free social platform still in beta that has received a great deal of attention among those that follow social media developments.

Whether Ello makes a dent in the social media ecosystem remains to be seen, but its creation points to a greater concern for the major players: niche social networks, such as Snapchat and Path that are exclusively mobile.

Providing further evidence are interest-based social networks, such as Foodie, a niche social network for food lovers, and Fitocracy, a site devoted to fitness. Polyvore and Kaboodle are two such networks that deal strictly with social shopping. 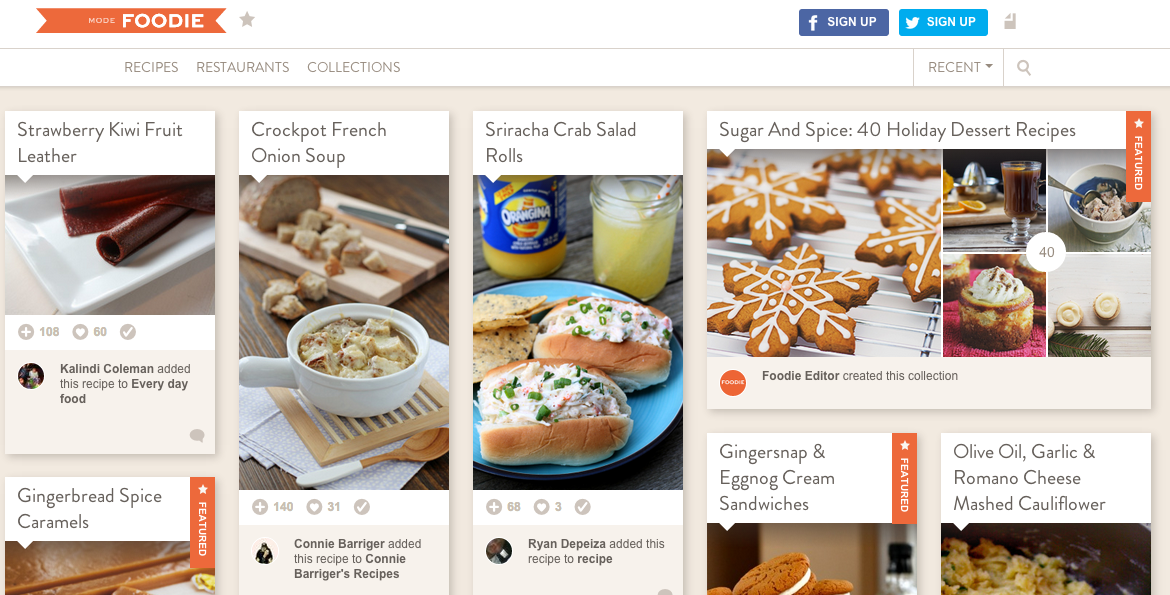 Foodie is a social network for food lovers.

While it still has a number of advocates, Google+ will not become significant factor in social media marketing; its number of users will likely decline.

The departure of Google+ chief evangelist Vic Gundotra earlier this year, coupled with the failure of Google Authorship, indicates that the social network has lost its moorings and may suffer the same fate as the search giant’s other attempts to leverage social media.

Facebook’s use of retargeting ads, combined with the ability for merchants to upload their customer databases through the use of Custom and Lookalike Audiences, speaks to Facebook’s intent to make advertising a more integral part of the platform.

Twitter’s Tailored Audiences, which promotes relevant content to users who have shown interest, reflects a similar priority for that platform.

This past year, both Twitter and Facebook experimented with ways to integrate commerce into their respective platforms. Twitter introduced Product Cards, which are designed to showcase products via an image, a description, and other key details about the product.

In addition, both networks tested the use of “Buy” call to action buttons this year, which appear alongside certain tweets and posts, to streamline the purchase process for online shoppers.

5. Use of Image-based Social Networks Will Progress

In “Add Visuals to 2015 Social Media Marketing,” I said that networks such as Pinterest, Instagram, Snapchat, and Vine have experienced rapid growth, a trend that should continue into 2015.

Thanks to filtering of the Facebook News Feed, which limits the amount of exposure businesses receive, retailers have been forced to find other ways to promote their products. Options could be Instagram and Pinterest, neither of which uses an algorithm to gauge what people see.

Marketers will likely crown Instagram as the default visual network. According to one industry report, marketers who invest 40 or more hours per week in social media are much more focused on Instagram than in the past and plan to increase their use of the platform by as much as 49 percent in 2015.

LinkedIn is already the leading business-to-business social network, and that dominance will continue in 2015.

By some accounts, as many as 88 percent of B2B marketers already use the site, and the introduction of a publishing platform that allows users to create long-form content distinguishes it from other social networks, none of which primarily appeal to business users.