Online retailers need to improve site performance and accessibility but they are optimized for search engines based on an audit of 70 recognizable retail websites.

On June 9 and 10, 2018, I ran each of 70 well-known ecommerce websites through Google’s Lighthouse, a free monitoring tool. It rates sites on five areas: 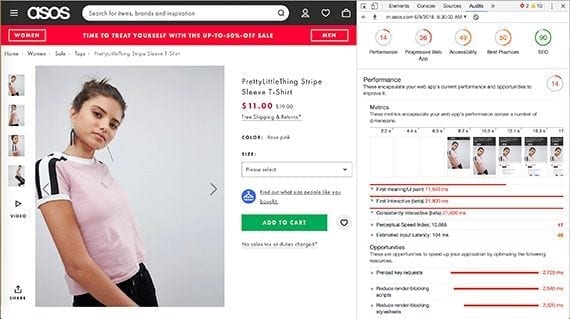 Lighthouse audits five areas of a website, including SEO and performance. The tool is built directly into the Chrome web browser.

For each audit, I used the Chrome browser with Lighthouse built in. The audit was run on a product detail page. I conducted the all of the tests from an Apple MacBook Pro with a 50 Mbps wireless internet connection.

Here are the key takeaways. 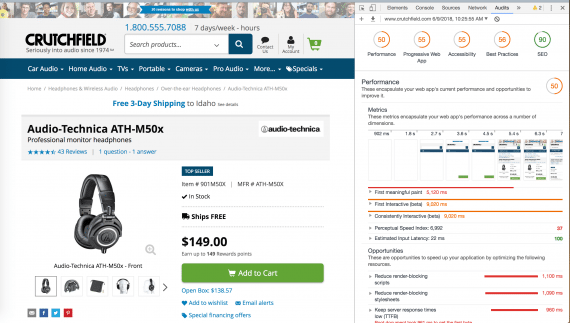 Each audit is a snapshot of the web page at that moment in time. Thus changes to a page’s markup will result in changes in the audit score.

Collectively, the 70 retail sites reviewed scored an average of 86.4 out of 100 on the Lighthouse search engine optimization audit. REI, John Lewis, and The Sill each scored a perfect 100. Tractor Supply, the billion-dollar farm supply retailer, had the lowest SEO score in the group. But was still a 67.

REI was among the retailers that scored a 100 for SEO on the Lighthouse audit.

The Lighthouse SEO audit measures 10 basic factors, including the presence of a title element and the use of a meta description. This is likely an indication that retailers are, generally, focused on SEO.

This focus may take a few forms. For example, online retailers may be choosing ecommerce platforms or solutions that have basic default SEO features. Or they may have SEO basics covered regardless of the platform.

Unfortunately, most of the retailers had poor performing — i.e., slow — websites, according to Lighthouse. The average performance score was a 22.1 out of 100. B&H Photo had the best performance score of the 70 sites audited with a 59. Hudson’s Bay Company and Sears each scored a zero.

Key site performance indicators include when a page has its “first meaningful paint” and when the page first becomes interactive.

One of the most common performance challenges was loading images not visible to the user. Lighthouse calls these “offscreen” images, explaining that “since users can’t see offscreen images when they load a page, there’s no reason to download the offscreen images as part of the initial page load. In other words, deferring the load of offscreen images can speed up page load time and time to interactive.” 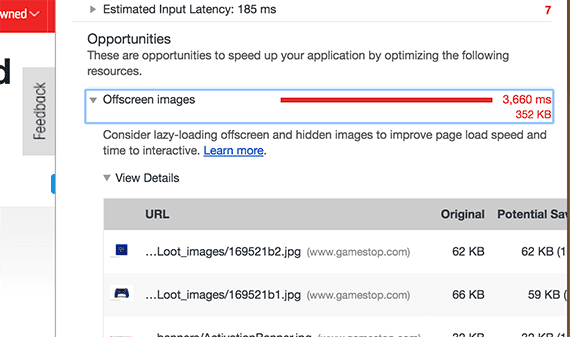 Waiting until the page completes its initial load to add offscreen images can improve site performance.

In contrast to SEO, one could assume performance is largely ignored or considered to be good enough. This is unfortunate for the poor performing sites, but an opportunity for other retailers.

You could run your own Lighthouse audit. Follow up on the performance suggestions and provide a better customer experience than most of the 70 sites I checked, which I’ve listed below.

Web accessibility describes how well people, including people with disabilities, can interact with a website. Providing an open, available, and navigable website for shoppers, regardless of disability, is simply good business for ecommerce retailers.

The 70 ecommerce sites audited with Lighthouse, however, managed an average of just 60 out of a possible 100 for accessibility. 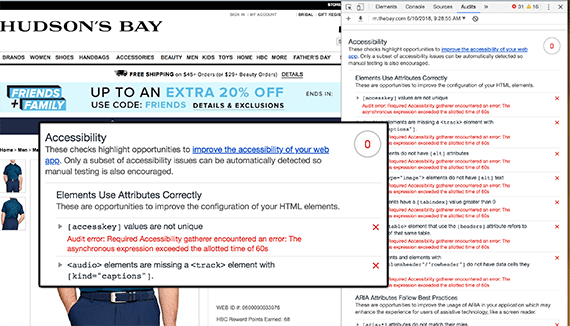 Some retailers scored as low as zero for accessibility.

Lighthouse can only measure a few aspects of accessibility. So it is not necessarily a reflection of how accessible each site actually is or whether these sites might be violating laws requiring web accessibility.

However, the aspects of accessibility that can be automatically tested with a tool such as Lighthouse are items a site should be able to get right.

Given that these accessibility traits can be measured automatically, it should be relatively easy to maintain them.

For your own website, make certain you’re providing ways for folks with disabilities to access your pages and products. As mentioned above, being able to service and sell to all consumers is good business. But there may also be legal concerns.

New York and Florida were most likely to see the federal filings, with 335 and 325 cases respectively.

The Adidas website followed these best practices the most, scoring an 88 in the Lighthouse audit. Bass Pro Shops earned the lowest score for the category at 31.

Lighthouse changes its tests for best practices as the state of web technology and web development evolves. Thus scoring well here can be a good indication of maintaining current standards. 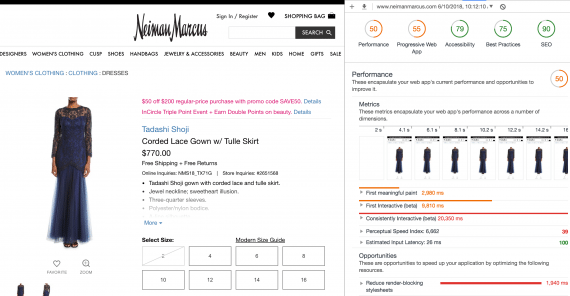 Retailers would be wise to increase their scores in each of Lighthouse’s five categories.

The last Lighthouse category to consider is conformity with progressive web apps.

PWAs give mobile shoppers an app-like experience via the web browser. PWAs can place icons directly on a mobile phone’s home screen and include push notifications or easy checkout. All of these features can be an advantage for an ecommerce business.

Hence, think of this score as a measurement of how close a site is to receiving PWA status.

On average, the 70 sites audited scored a 44 out of 100 for PWA conformity. The top score, 82, went to Build.com, meaning that site might have relatively little work to do to begin enjoying the benefits of a PWA.

Here is a list of how each of the 70 sites scored.