Ecommerce merchants know the importance of favorable customer reviews. Results of a 2013 survey of 1,046 American consumers by research firm Dimensional Research show that 90 percent of consumers who read online reviews claimed that positive reviews influenced their decision to buy.

Most merchants and consumers also know that not all reviews are genuine. When the proportion of fake reviews — by individuals who have not purchased a product and are being paid to write positive reviews — reaches a certain level, the entire review function is threatened.

Amazon, the merchant that could have the most to lose from phony reviews, has decided to take legal action.

Earlier this month, Amazon announced that it had filed suit in Washington state court against four websites to stop them from soliciting and paying for phony positive product reviews. These sites sell their services to manufacturers and product vendors, promising them glowing product reviews. Amazon contends the review sites engage in trademark violations and deceptive acts and run afoul of the state of Washington’s consumer protection laws as well as the Anti-Cybersquatting Consumer Protection Act. It is seeking damages and restitution. See a PDF of the filing here.

Guaranteed 4 and 5 star reviews on Amazon.

The four sites (which have different owners) are BuyAzonReviews.com, BuyAmazonReviews.com, BuyReviews.net, and BuyReviewsNow.com — the last two sites have been taken down. While Amazon does have detection systems in place, the ” drip-feed” delivery system advertised on these sites allows many of the phony reviews to slip by.

The complaint states that, “Amazon takes the integrity of its customer reviews very seriously. Amazon has developed sophisticated technologies and protocols to detect and remove false, misleading, and inauthentic reviews from its website. Amazon scours its site for fake reviews, removes them when it finds them, and suspends sellers that post or purchase fake reviews.”

According to the complaint, Amazon alleges that to trick it into thinking the reviews are from verified purchasers (those who have an Amazon account and have bought products), the owner of Buy Azon Reviews advises sellers to not to actually ship the item to the reviewer, but just send an empty box for tracking purposes. Still, Jay Gentile, the site owner, claims he is doing nothing wrong or illegal. 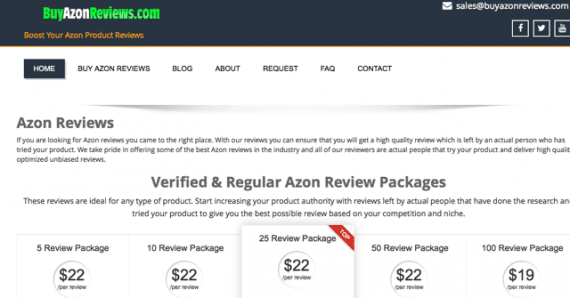 While in the short-term Amazon may benefit from fake four and five star reviews, the less credible the reviews are, the less customers will rely on them. That can affect Amazon’s reputation.

The complaint states, “While small in number, these reviews threaten to undermine the trust that customers, and the vast majority of sellers and manufacturers, place in Amazon, thereby tarnishing Amazon’s brand. Amazon strictly prohibits any attempt to manipulate customer reviews and actively polices its website to remove false, misleading, and inauthentic reviews. Despite substantial efforts to stamp out the practice, an unhealthy ecosystem is developing outside of Amazon to supply inauthentic reviews.”

Earlier this year, Yelp, a company with a business model based entirely on customer reviews, sued YelpDirector.com and Revleap.me, alleging that the sites help businesses to post positive reviews of their operations and suppress bad reviews. YelpDirector has now been taken down. It appears that just the filing of a lawsuit can make reviews sites go away, presumably because larger companies have deeper pockets. If Amazon were to prevail in court it would receive triple damages and attorney fees.

Where Are the Regulatory Agencies?

These websites are so blatant in their tactics — often advertising for positive review writers on Craigslist and Freelance.com — that fake reviews would appear to fall under the purview of the Federal Trade Commission. In 2014, the FTC did launch an investigation into Yelp after receiving 2,046 complaints about the company beginning in 2008, mostly from small business owners claiming unfair or fraudulent reviews. However the agency decided to take no action. Going after fake review sites allows Yelp to show that it is trying to limit phony reviews. We’ve addressed negative Yelp reviews here previously, at “Can Lawsuits Remedy Bad Online Reviews?.”

Moreover, states, if not the federal government, are cracking down. Two years ago, the New York Attorney General forced 19 companies to pay $350,000 in penalties for fabricating online reviews.