Online retailers have an ethical and legal responsibility to customers to advertise and market in an honest and legitimate fashion. But sometimes the line separating an excellent marketing idea from a despicable or even illegal business practice is not perfectly clear.

Ecommerce marketers, even well-meaning ones, may be contributing to widespread advertising fraud without even realizing it.

Some customers who actually purchased an Amazon Kindle case from VIP Deals via the Amazon Marketplace >received a letter offering them a full refund in exchange for a positive review on Amazon. As a result, the company garnered nearly 400 extremely positive reviews, and presumably boosted its sales of Kindle cases.

The New York Times and several other commentators, blogs, and news sites have consistently referred to the reviews VIP Deals generated as “fake.” But it is worth noting that the company’s actions are only slightly different or more extreme than “best practices” promoted by leading marketers and even review services.

PowerReviews, as an example, consistently encourages its customers to send review solicitation emails shortly after a customer makes a purchase.

In a PowerReviews blog post from September 2011, Alan Trzuskoski, who is, in my opinion, an ethical and respected marketer, wrote that companies should “add an extra holiday incentive for writing reviews. Let customers know it’s a holiday bonus and add a deadline” when sending review solicitation emails.

Similarly, another PowerReviews blog post stated that “it is well known that 80-90 [percent] of all reviews on your product pages are a result of a post transactional email. Merchants who implement a follow-up email program see not only an increase in the volume of reviews but also a more favorable distribution of review ratings.”

Even Practical eCommerce has advocated several times that readers should send review solicitation emails and include incentives to get customers to respond.

These review marketing best practices — to solicit reviews from real customers and offer an them an incentive — are surprisingly similar to what VIP Deals did. Nonetheless, VIP Deals’ actions are being described as misleading or even illegal.

The New York Times’ article mentioned above has shed some light on review marketing and it may well be that the very act of paying incentives for a review taints the process just enough that it ultimately can be misleading to customers.

Paying for reviews, even when the payment comes in the form of a discount or other incentive, may actually be illegal.

In 2009, the U.S. Federal Trade Commission updated its endorsement and testimonial guidelines to better reflect the modern, digital world. A relatively broad reading of those guidelines would indicate that any relationship between reviewer and the reviewed company — even an incentive relationship — should be disclosed. Doing otherwise could be illegal.

Some online merchants have also been accused of purchasing reviews from individuals or agencies. These reviewers may or may not have actually used or handled the product. For example, a worker on Fiverr, is offering to review two digital products for $5. Other crowdsourcing marketplaces like Amazon’s Mechanical Turk and Digital Point and online classifieds like Craigslist have fake-review jobs posted. 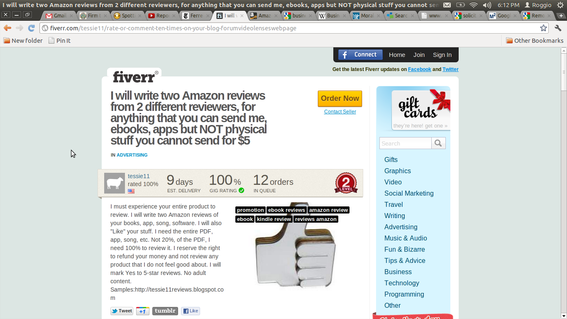 A worker on Fiverr offers to write fake Amazon reviews.

Online retailers should always aim to serve customers, even when they are encouraging reviews, and in the light of The New York Times article and other published reports, serving customers may mean changing how review marketing is done.

The VIP Deals incident should serve as a lesson for marketers. Sometimes what seems like a cleaver marketing or advertising plan in conference rooms may unintentionally seem unethical when presented to customers or the media.