Microsoft’s Bing search engine will get a major redesign in the next month, extending the tool’s integration with Facebook and introducing a new feature to help searchers get more done.

“In 2009, we launched Bing with a simple proposition: people should expect more from a search engine,” wrote Microsoft Corporate vice presidents, Derrick Connell and Dr. Harry Shum in a Bing blog post. “Our aim has always been to help you do more with search, and over the past three years we have made exciting strides to realize that vision. Today we are taking a big step forward as we begin rolling out what is the most significant update to Bing since we launched three years ago. Over the coming weeks, we will be introducing a brand new way to search designed to help you take action and interact with friends and experts without compromising the core search experience.”

The new Bing will take a three-pronged approach to search, offering what the company described as a more relevant, faster, and cleaner standard search, a “snapshot” section developed to help users complete tasks from within the search results page, and a Facebook-driven social “Sidebar” that more thoroughly integrates social and search.

Bing has been showing results and Likes from Facebook since the fall of 2010 and the search engine’s close relationship with the largest social network — Microsoft has invested in Facebook and partnered on search — may have had something to do with its success. 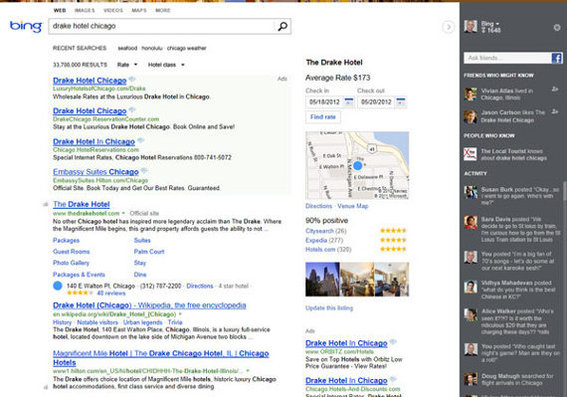 The new Bing will have three columns, according to Microsoft.

“Before the Internet, mostly how you got things done was through people – you’d ask your friends, you’d call your Mom, you’d get insights from co-workers,” said Microsoft’s Connell. “Today, more and more people are joining social networks, chatting about things on Facebook and Twitter, but it’s very difficult to capture their knowledge on a Web page.”

Bing’s forthcoming “Sidebar” will show results from a user’s social network and lets users pose questions to Facebook friends during the search process.

“The goal is to surface the people who have knowledge about a particular topic,” said Connell. “We want to make it easy for people to accomplish anything they set out to do by allowing them to tap into the wisdom of their friends and of the broader Web – the 95 percent of things people know but never write down.”

“Search is about finding information to help you make decisions. Every day, most of us make decisions with input from people we trust. I ask people I work with where to find the best coffee in town; I ask my parents whether I should buy a house; I talk to my friends about the best fall television shows,” wrote Bret Taylor, Facebook’s chief technology officer, in an October 13, 2010 blog post. “We’re partnering with Bing to give you a way to bring your friends’ recommendations to online search. Your friends have liked lots of things all over the web, and now instead of stumbling across a new movie or having to look at a friend’s profile to see which restaurants they like, we’re bringing everything together in one place.”

“The sidebar,” according to Microsoft, “also displays the names of experts and enthusiasts who have blogged or tweeted about topics related to one’s search. Users can click on the person’s name and read their blog or follow them on Twitter.”

Bing is also adding a “Snapshot” section, which uses information about search intent to help give users actionable information related to the query. For the most part examples of how this section will work have focused on hotel reservations services and restaurant recommendations.

As an example, searching for a hotel in Grand Junction, Colorado might return average room rates, reviews, and even an option to make a reservation.

“We’ve run thousands of experiments to determine the types of tasks most frequently attempted in Bing, and in snapshot we help you take certain actions when we determine that the intent of your search matches these tasks,” Wrote Connell and Shum. “To help you do more and do it faster, we continue working with industry leading companies like OpenTable, FanSnap and others integrating them right into the middle column. With snapshot, Bing does the heavy lifting by organizing useful information so you can act more quickly.”

Bing’s core search experience is also said to be improved in the forthcoming redesign. In fact, Microsoft believes that users will prefer Bing results to Google results.

“We knew that serving relevant results that were equal to or better than the other guy was table stakes. To track our progress, we conducted tests that removed any trace of Google and Bing branding,” wrote Connell and Shum. “When we did this study in January of last year 34 percent of people preferred Bing, while 38 percent preferred Google.

“The same unbranded study now shows that Bing Search results now have a much wider lead over Google’s. When shown unbranded search results 43 percent prefer Bing results while only 28 percent prefer Google results. What this means is that in 3 years we’ve made some real progress in core relevance and search quality, and while search is becoming so much more than just web results, having a rock solid foundation is important for the future of Bing and search more generally.”