Etsy, the online marketplace that offers artists, crafters, and vintage collectors a venue to sell their goods, filed for an initial public offering earlier this month. The company plans to raise at least $100 million.

Spending on marketing more than doubled between 2013 and 2014, contributing to the increased loss. Most of the increase was attributable to more spending on search engine marketing via Google Product Listing Ads. The company has been expanding its marketing efforts and intends to use a good portion of the proceeds of the IPO on international advertising. 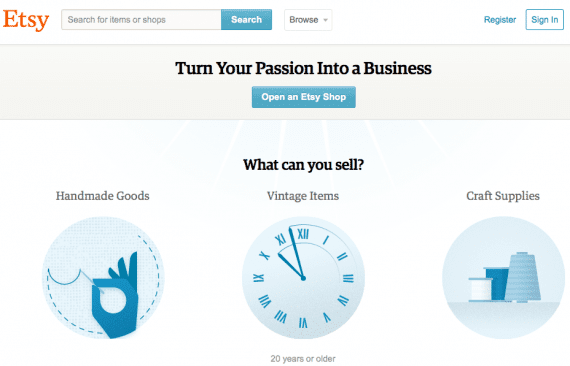 How Does Etsy Make Money?

Each item listed on Etsy costs sellers 20 cents when the listing is published. A listing lasts for four months or until the item is sold. Once a sale occurs, Etsy collects a 3.5 percent transaction fee on the item’s sales price. Additional revenue — 42 percent — comes from seller services including Promoted Listings, payment processing via Direct Checkout, and discounted shipping labels.

According to a 2014 Etsy survey, 86 percent of its American sellers are female and 95 percent of all sellers operate from home. Sellers range from hobbyists to professional merchants, but 76 percent consider their Etsy shop to be a business.

Initially Etsy allowed only individually handmade products to be sold. In late 2013, Etsy changed its policies to allow sellers to partner with third-party small-batch manufacturers to produce their goods. This alienated some Etsy sellers and customers who wanted the company to stick with its strictly handmade craft seller beginnings.

In the prospectus, Etsy CEO Chad Dickerson remarks that failing to maintain the image of an “authentic, trusted marketplace” that values “unique offerings” and “handmade goods” could be a risk to its business.

Nevertheless, Etsy is incorporating advances in manufacturing technologies, including 3D printing, that let artisans and small-batch manufacturers produce small quantities of goods at a fraction of the cost of either traditional manufacturing or handmade creation.

Dickerson says, “With our vision of responsible manufacturing, we are promoting a new, people-centered model in which artisans can preserve the spirit of craftsmanship and grow responsibly by collaborating with people at small-batch manufacturers to make their goods.”

Etsy fosters a sense of community by encouraging people to join together in virtual teams that represent either a geographical area or a craft such as pottery.

Etsy tries to find a balance in promoting local content, and local payment and shipping choices, while offering a global marketplace.

In 2014 Etsy, launched a wholesale division to provide sellers a new sales channel. Etsy merchants can sell to local boutiques and national chains such as Nordstrom and Whole Foods Market that wish to add distinctive goods to their store merchandise. The company has been successful thus far in providing new sales opportunities for its sellers. Etsy collects the same 3.5 percent transaction fee for wholesale purchase orders.

A Different Definition of Success

When Etsy goes public, it will be unique in that it will join only one other U.S. based certified “B corporation” that is publicly traded on a stock exchange. A B corporation has a double bottom line, adhering to unconventional corporate guidelines that include acting in a manner that creates social good.

In short, maximizing profits for shareholders is not the only objective. That fact might make some potential investors think twice about becoming shareholders. In its filing, Etsy does warn that it has a history of operating losses and the company “may not achieve or maintain profitability in the future.”

Etsy competes with Ebay, Amazon, and Alibaba online. On the brick-and-mortar retail side, Etsy competes with small vintage and consignment shops. The company believes that its unique products and artisan reputation will help it compete against mass merchandisers.

In its IPO filing the company states, “Our growing community has made it clear that they desire thoughtful alternatives to mass commerce and impersonal retail and products that better reflect their personal style and values.”

However Etsy acknowledges that “…competitors offer low-cost or free shipping, fast shipping times, favorable return policies, and other features that may be difficult or impossible for Etsy sellers to match.”

Etsy has enjoyed strong growth and realizes that it must increase its marketing efforts and expand sales outside of the U.S. to continue growing. With its losses increasing, the company needs an infusion of capital to finance advertising and new technology. It will be interesting to see if as a public company Etsy can balance keeping its handmade crafts roots while satisfying the wishes of shareholders.