Facebook’s video capabilities are gaining momentum, with new functionality and advertising options. Video is taking over our Facebook newsfeeds. Many ecommerce video marketers are starting to question whether they should emphasize Facebook and not YouTube.

First let’s look at the usage stats. Facebook announced a key milestone for its video usage at the end of 2014, when it hit 3 billion views per day. However Facebook still a has lot of catching up to do: YouTube hit 4 billion daily views back in 2012.

An essential aspect for any marketer is measurement. So how do the two platforms compare when it comes to analytics?

Facebook made the number of video views public in late 2014. Before then it was very difficult to know how video content performed on the platform. Now pages have access to additional metrics via the Facebook Insights platform, but video uploaded to personal profiles does not have this capability. In comparison, YouTube offers in depth metrics for all users who upload video, and video views have long been a public metric.

Sharing Across the Web

When it comes to sharing video across the web, Facebook has lagged behind. The YouTube player is dominant — for personal and business sites. However, Facebook is now rolling out an embedded video player to all users in the coming weeks.

Sharing Across the Web Winner: Tie

Facebook has an obvious preference to promote its own products. The visibility of video uploaded directly to the site is much higher than video pulled in from an external partner like YouTube.

There are two main ways in which Facebook promotes directly-uploaded video. 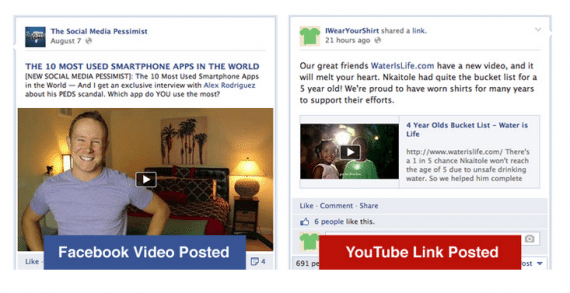 Engagement with Facebook video largely happens amongst friends rather than strangers. This creates a safer and arguably a more valuable discussion. Facebook also takes advantage of its tagging functionality to further increase the viral nature of the content, allowing the creator to ensure certain users see the content, rather than leaving it to the mercy of the newsfeed algorithm.

Meanwhile engagement with YouTube video is largely in the public comments. YouTube does not have a tag feature but it does allow users to subscribe to a creator’s channel that then alerts them each time a new video is published.

Facebook video plays to the Facebook algorithm and not to the search engines. It is much more concerned with increasing engagement to promote viral growth, rather than targeting users looking for content via a Google search.

As a Google owned product, YouTube is closely integrated into the search experience. YouTube content is served on the search results pages where it is seen as relevant and potentially useful to the user and can take prime positions for key terms. The way videos are uploaded to YouTube fits well with how search is structured. Creators give each video key metadata and tags to describe it and entice searchers to view it. Creators can even add scripts and annotations to help Google’s algorithm understand the content more fully.

Facebook allows video of up to 40 minutes. However shorter formats have been shown to be most effective, with videos under a minute amongst the most likely to be viewed to the end and most likely to promote engagement. In comparison, YouTube began by focusing on shorter formats, limiting users to content around 10 minutes in length. However, in recent years YouTube has removed this limit, making way for long form television style content on the platform.

If your business strategy is focused on Facebook, then Facebook video comes out on top. It is more effective in terms of reach and engagement on Facebook and now offers a good suite of metrics to evaluate campaigns. However, YouTube has a huge, unmatched role in video marketing. YouTube’s embedded player is a simple and reliable tool for hosting most any video content.