If you create or curate content on the web, you may want to consider the use of software tools to automate the distribution process. Today, I compare two such tools — dlvr.it and Buffer — based on five criteria.

dlvr.it enables users to share content from RSS-enabled websites to social networks. The platform continuously scans the user’s content feeds for updates and when it finds new entries, shares them across various channels.

Routes. In dlvr.it, users set up “Routes,” where content from one or more sources gets delivered to social network destinations.

One method of distributing content on dlvr.it is through the use of Routes.

The Q. A second method by which dlvr.it syndicates content is the “Q.” With this option, users select the social profiles where they want content to go and then set a daily or weekly schedule for each network. As new content appears in the Q, it gets sent based on the pre-determined timetable.

The Q sends messages based on preset timetable.

Direct Posts. Aside from reliance on content sources, users can also create posts directly in dlvr.it via the “Post” option.

Pricing. Dlvr.it offers a free version, but severely limits the number of destinations to which users can send content. Premium pricing starts at $9.99 per month and allows a greater number of social profiles.

Post creation. Users can create a series of posts at one time and choose which social network profiles to send them. Buffer will then spread distribution throughout the day or week at pre-determined intervals. In addition, Buffer shortens and tracks links in the posts for analytics, such as the number of people who clicked on a particular link. 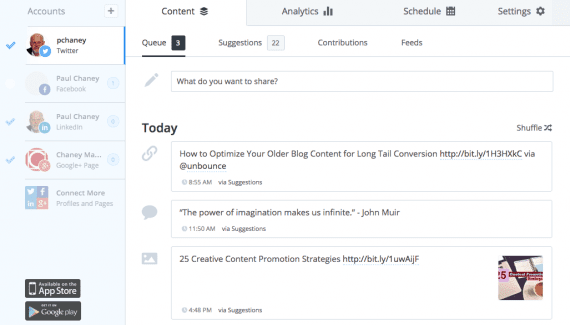 Users create posts in the dashboard for scheduled distribution.

After registering with the site, users must first connect their social profiles. Currently, Buffer supports the following social networks.

Users then set up scheduling options for each network by clicking the “Schedule” tab in the main navigation. In the example that follows, I created four different posting times for my Twitter account.

Similar to dlvr.it, the premium version of Buffer offers the option of connecting RSS feeds. When the platform finds new content in the feed, it automatically pulls it into the queue for distribution.

Buffer also comes with a content recommendation engine where it identifies information based on various topics. This is a new feature still under development but is useful when users run out of content to share.

Pricing. Buffer offers a free version that gives users access to one social profile per network. A premium version is available for $10 per month, which increases the number of social profiles to 12 and enables two people to use the platform.

Although both platforms share common features such as posting based on pre-determined schedules, dlvr.it offers more automation due to its reliance on RSS feeds and content created at other sources. It is more of a set-it-and-forget-it tool than Buffer, which works best for automating the distribution of content that users discover on the fly during their browsing activity, as well as for content created via the dashboard.