Many Internet users are members of at least one social network, so including social sharing buttons would seem to make sense.

There is also a convenience factor. The lack of buttons means that users who wish to share a piece of content or product have to copy and paste the page URL, and then go to the social network to post.

While those factors weigh in favor of using social sharing buttons, how does their presence affect sales?

Do social media buttons promote conversion optimization, or are they window dressing that detracts from the purpose of the web page? And, do buttons with counters fare better than those without?

A case study from Visual Website Optimizer, a website conversion and testing platform, of Finnish ecommerce retailer Taloon.com found that removing social sharing buttons from product pages resulted in an 11.9 percent higher conversion rate than pages that contained them. 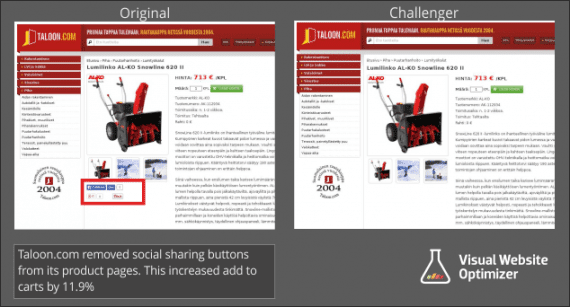 According to Taloon.com’s Jani Uusi-Pantti, the number of shares on most product pages was zero. “While high number of shares and likes act as a positive reinforcement, low number of shares breed distrust in the mind of the customer about both the company and the quality of the product,” said the case study.

Luke Wroblewski, a software designer and product director at Google, conducted research to determine the percentage of page view clicks on Twitter or Facebook share buttons. His findings were surprising. Across more than 18 million page views, the average click-through rate was a paltry 0.25 percent.

The low numbers could be due to three factors: demographics, user behavior, and user expectations.

According to research firm Forrester, rather than actively contribute to social networks, most people fall into the “spectator” category, a fact that is particularly true of older Internet users such as baby boomers and seniors.

Their tendency is to consume content (or buy products) — but not share the fact they have done so with social network friends and followers.

Another factor contributing to the low click rates of social sharing buttons may have to do with what people expect when they visit a page or, in the case of the GetResponse example, open an email. Their attention is focused not on social sharing, but on the intended purpose of the page or email. Therefore, they cast a blind eye to the button’s presence.

In the early days of the commercial Internet, websites sometimes showed hit counters, that showed a running tally of “hits” the site received over time.

Often, they proved to be a bad idea for sites that received less traffic. The counter provided visual testimony that the site must not be very popular (if it were the numbers would be higher) and cast doubt as to whether it was worth a visitor’s time to remain there.

That same dynamic holds true with social sharing buttons that have counters. If there are large numbers of shares, visitors may be more inclined to spend time with the content. Conversely, if the numbers are small, they may move on elsewhere.

Convert.com, an A/B testing software company, tested that hypothesis and found that pages with social buttons that had higher numbers helped conversion rates while those with low numbers had the opposite effect.

What I’m referring to is a psychological dynamic called “social proof.”

According to Dr. Paul Marsden, psychologist and author of The Social Commerce Handbook, to resolve uncertainty of what to do or buy, we often look to what others are doing or have done, and take our cue from them.

When something is popular or dominant, we often see this as social proof that is the correct, most valid option. It is classic peer pressure in operation.

Ultimately, it is not the presence of buttons that cause people to share, but the worthiness of the content or product. Split testing is the best way to know whether buttons help, or not.