Social media management platforms can save time. This is especially the case for companies and individuals that maintain a presence on multiple social sites, such as Facebook, Twitter, and Google+. But is one management platform better than another?

Many platforms share similarities, such as the ability to schedule posts and add photos or videos. Beyond that, the features — i.e., price, social networks to choose from, posting interface — greatly vary.

In this post, I review pros and cons of Hootsuite, a popular platform utilized by many smaller businesses. 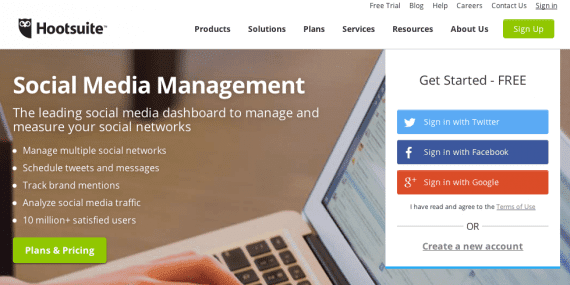 The number of social networks that Hootsuite users have access to is determined by their account level: Free, Pro, or Enterprise. The Free version is limited to three networks.

At $9.99 per month, the Pro version is probably a better choice because it allows access to more social networks and profiles within those networks — where users can have one profile for their personal Facebook account and another for business accounts (or multiple business accounts). 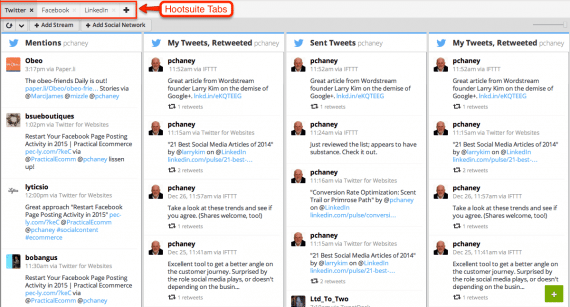 The Hootsuite interface is organized by tabs.

For example, one tab can contain all the personal social media sites to which a user subscribes while another contains the user’s business accounts. Alternatively, as in the example above, users can assign individual tabs to Facebook, Twitter, LinkedIn, and so on.

Streams enable users to segregate content within each social network. Using Twitter, for instance, a user can have one stream for her home feed, another for posts, and still another for direct messages.

Hootsuite’s most recent version, however, has improved this. It’s now easier to use, but still out of the way until needed. Mousing over the “Send to” or “Compose message” fields causes the interface to open, revealing a more expansive message area and a bigger, more readily identifiable list of social network profiles.

The posting interface has been enlarged in the most recent version.

According to Hootsuite, the apps give users the ability to monitor social networks and sites other than those in the default list. The YouTube app, for example, enables users to schedule and bulk upload YouTube videos while the Salesforce app places that customer-relationship system directly inside Hootsuite. 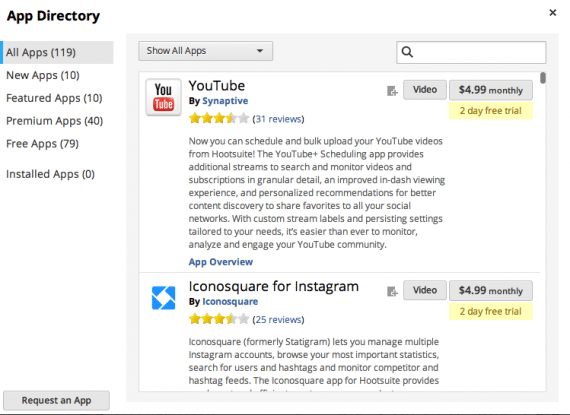 For instance, having so many social networks and profiles appearing in the interface, especially at the Pro level, can get confusing given the fact there is so much activity taking place within any one tab. For me, the interface tends to be somewhat overwhelming. I prefer something a little less crowded.

It can take time to learn all of Hootsuite’s features. However, Hootsuite University, which includes many tutorials, can help.

And while most of the apps in the directory are free, some require premium subscriptions. Also, several of the analytics reports require payment, which increases the overall cost.

Many smaller businesses may find that Hootsuite offers more features than they need. Businesses that are interested interested in using the features will likely need to commit hours to the learn them.

Still, just because Hootsuite provides many bells and whistles does not mean users have to use all of them. The platform performs well using only the basic functions.

Next week, I will address the pros and cons of Sprout Social, another popular social media management program.