2 Ecommerce Blunders to Avoid in 2015

Businesses ultimately fail when liabilities exceed assets — when the company doesn’t have enough money to pay its bills and keep operating. While there are many reasons or ways that a business can get to that point, for ecommerce operations there are two strategic blunders that will almost certainly lead to failure: (a) discounting too heavily, and (b) spending too much on marketing.

Knowing what these blunders are and how they can destroy an ecommerce business may help some entrepreneurs avoid them in 2015.

Ecomom, a failed (and reborn) ecommerce startup aimed at providing environmentally friendly products for mothers and children, is one of the saddest and most dramatic examples of an ecommerce business gone wrong.

Jody Sherman, the company’s founder and original chief executive, eventually took his life, and the company failed in January 2013 in spite of having received about $12 million in investment funding.

While many factors contributed to the Ecomom failure — Business Insider described these in detail in an April 2013 article — one specific problem may have been the company’s discounting policies. Ecomom decimated its own margins with deep discounts and daily deals, losing money every time it made a sale.

Using services like Groupon, Ecomom was giving many of its customers 50-percent discounts. The company also made no effort to limit these deep discounts to new customers so that even repeat shoppers were often buying items for less than Ecomom’s cost. 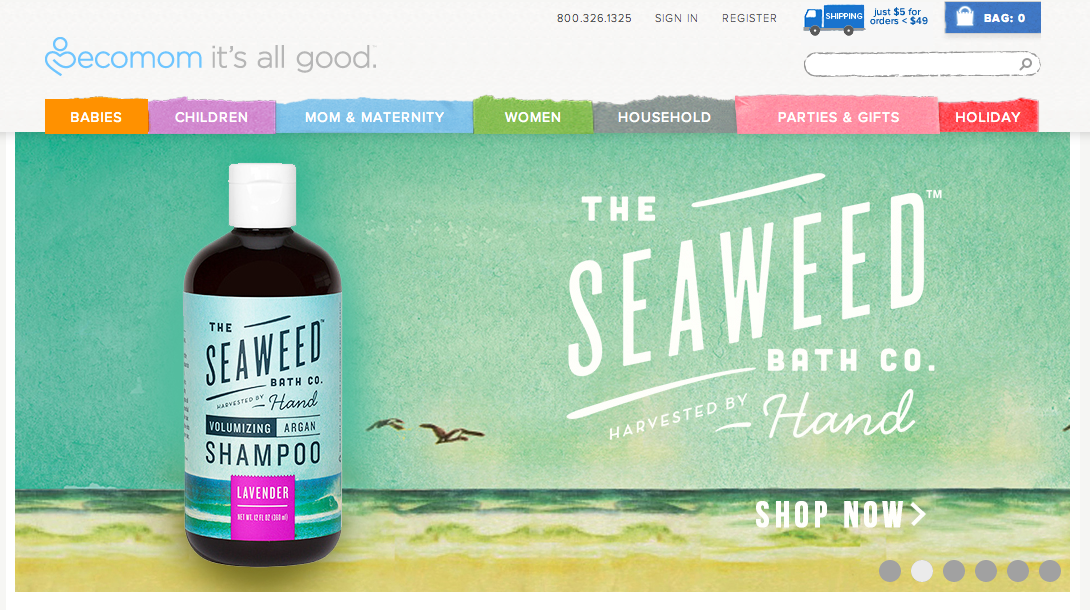 Ecomom is a failed — and reborn, shown here — ecommerce startup aimed at providing environmentally friendly products for mothers and children.

Ecomom’s former controller, Phillip Prentiss, wrote a “post mortem” for Ecomom in 2013. Prentiss described the company as having a negative 48-percent margin. The deeply discounted sales were killing it. Some large retailers can afford to give items away, if you will, to acquire new customers, making back money when those shoppers return and make subsequent purchases. This was not happening for Ecomom. Even subsequent orders were going for cheap.

Etailz acquired Ecomom’s name and assets in April 2013, and the Ecomom site is up and operating, seemingly without such deep, margin-crushing discounts.

Although discounts, even below-cost discounts, can temporarily boost cash flow and attract new customers, discounting too much or too often will kill an ecommerce business. Find some other way to compete.

Spending Too Much on Marketing

Marketing is the act of communicating the value of a product or service to customers with the goal of selling that product at a profit. Marketing can and should take many forms. For ecommerce businesses, marketing is one of the most important functions.

Marketing can also be costly, and when unchecked, it can cripple a business. Too much money spent on marketing may have contributed to another famous ecommerce failure, Boo.com.

Founded in 1998, Boo.com spent $135 million in investment capital in just 18 months, as it tried to build a global brand and do for sport and fashion apparel what Amazon was doing for book selling in the 1990s.

Although Boo.com reportedly spent lavishly on many areas of its business, it was also known to have spent too much on marketing. This overspending likely took three forms.

First, Boo.com spent an incredible amount of money on an impressive bit of technology that allowed shoppers to place products on virtual models, which would then show off the article of clothing. Shoppers could zoom in on the model and spin the item 360-degrees. The technology was almost mind blowing at the time (1999 and 2000), and it was in a sense a marketing triumph. But it reportedly cost more than $6 million to set up and $500,000 per month to maintain.

Second, Boo.com spent on employees to manage marketing. Because the company was trying to be a global brand, it needed folks that could understand and market in many countries. As a result, Boo.com hired hundreds of employees, all of whom had to be paid.

Third, Boo.com invested in ads and public relations. Boo.com spent something like $25 million on advertising and public relations even before it opened, and while the company had acquired an impressive 350,000 subscriber email list before it started selling anything, it had also created such a high barrier to success that it was, in a sense, doomed to fail.

Boo.com was creating marketing that did, in fact, communicate the value of the product to its customers and would have likely lead to sales. But it was spending too much on marketing relative to its return on investment, and it simply ran out of cash to keep operating.

Ecommerce startups may be tempted to send a lot on pay-per-click advertising or on a search-engine-optimization expert or software tool. But it is important to remember that an investment in these areas needs to be proportional to the expected return — i.e., the expected profit.

The mistakes that Ecomom and Boo.com made were strategic errors as opposed to tactical errors.

Tactical errors are things like poorly managing inventory, have a bad website, or not understand the competitive environment. (Learn more about these mistakes in a previous article, “8 Reason Why Ecommerce Businesses Fail.”)

Tactical errors can be repaired, fixed, or made up for. One can get investors, improve inventory management, build a better website, or gain a competitive advantage.

In contrast, strategic errors are a problem with the business plan or with how that plan is being executed.

Ecomom wanted to attract new customers, so it offered discounts. But it failed to understand how too much discounting was impacting its bottom line.

Boo.com wanted to do for clothing and footwear what Amazon was doing for books in 1999, but it tried to start big rather than grow big.