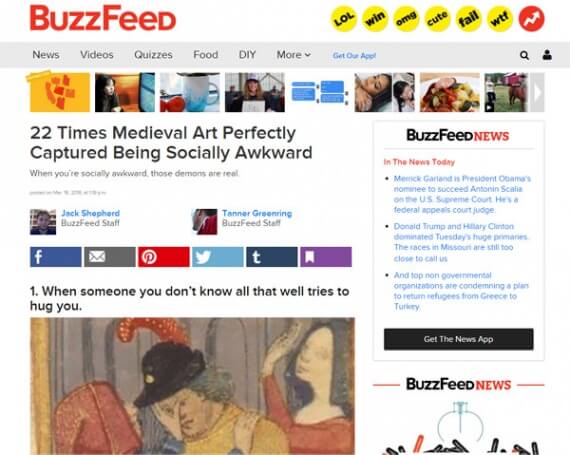 Listicles are articles that consist of lists. BuzzFeed has used listicles to propel its popularity.

An article in list form or a simple list extensively annotated, the listicle is at once popular, traffic-driving, and an easy-to-comprehend form of journalism and content marketing. It is the blue-collar approach to engaging customers and generating content, and is slowly winning over at least some of the literary and journalistic elite.

There is something fundamental about communicating via a list. It is core to how humans like to interact with information, and lists can be especially helpful for organizing and understanding complex ideas — thus, the listicle’s success in content marketing.

Put simply, people like lists. Writing in the Atlantic magazine, Megan Garber summarized the collective fascination with tallying things up with a sort of list of greatest lists.

You could probably extend Garber’s list by adding dozens or even hundreds of additional examples of lists, lineups, and enumerations.

The takeaway, however, is not just the quantity of lists humans have made or used, but also the age of the list as a literary form. While Bible scholars would not think of Exodus 20 or Deuteronomy 5 as a listicles, The Ten Commandments are organized like a bulleted list. In fact, many, if not most legal documents are too.

“The article as a numbered list,” wrote Maria Konnikova in a 2013 The New Yorker article, “has several features that make it inherently captivating: the headline catches our eye in a stream of content; it positions its subject within a preexisting category and classification system…it spatially organizes the information; and it promises a story that’s finite, whose length has been quantified upfront. Together, these create an easy reading experience, in which the mental heavy lifting of conceptualization, categorization, and analysis is completed well in advance of actual consumption…and there’s little that our brains crave more than effortless acquired data.”

The reader is able to understand what’s important about a topic quickly and with little effort. This is extremely valuable to busy people.

Here’s an analogy. Websites often share common features. For example, many sites have a way for visitors to create a user account and, later, log into that account. Web developers do not necessarily write a new user account system for each and every project. Rather, they will use a convention to manage user accounts. Frameworks like Ruby on Rails or Laravel use convention over configuration to reduce the amount of code a developer will need to write. The most common features typically take very few lines of code to get up and running.

In a similar way, listicles rely on numbering conventions to convey a lot of meaning without having to communicate the specifics associated with a topic. In effect, lists make it simple for readers to learn something new. Listicles use conventions to lay a foundation for delivering salient information in consumable, easy-to-remember bites.

Inherent in The New Yorker’s description of why a listicle is so appealing to readers is also something of a rebuke. Listicles are easy because they do the thinking for the reader. “Together, they create an easy reading experience, in which the mental heavy lifting of conceptualization, categorization, and analysis is completed well in advance of actual consumption,” Konnikova wrote.

While this is true, and while consumers should not, presumably, get every bit of their news and information in the form of a list, this should not dissuade content marketers from using listicles.

“There’s nothing about the form of the listicle itself that prevents it from dealing with highbrow or important subjects and increasingly, news of all kinds is being delivered in this form,” wrote Arika Okrent for The University of Chicago Magazine. Okrent, who holds a Ph.D., is known to write listicles for somewhat heady publications.

The point here is that listicles do get some bad press, if you will, but that it should not prevent content marketers from using this easy-to-read form.

Content marketing’s goal is, first, to attract readers, second, engage those readers, and, third, to start a relationship that will help retain those readers. Done well, content marketing can position your business as an export that your customers can turn to not just for products, but also for a information.

Listicles can be a very effective part of your content marketing strategy. They may not be as thought provoking as some critics might like. But they can be helpful for your shoppers.