Latin America presents a paradox to ecommerce merchants. It contains a rapidly growing middle class eager for a larger selection of quality goods, but the region has unreliable shipping operations and limited consumer use of banks and credit cards.

The World Bank estimates that more than 50 million Latin Americans joined the middle class between 2000 and 2010. About 30 percent of the Latin American populace is now considered middle class and most of the growth — 35 million people — has occurred in Brazil. Nevertheless, at about $57.7 billion in online sales in 2014 according to eMarketer, Latin America has the second lowest level of digital sales worldwide, surpassing only the Middle East and Africa.

Forrester Research’s 2015 report, “Latin America eCommerce Forecast, 2014 To 2019,” predicts that business-to-consumer ecommerce sales in Brazil will increase from $17.8 billion in 2014 to $40.8 billion in 2019. However, the year-over-year growth rate will decline to single digits by 2016. The number of online buyers is expected to increase from 33.5 million in 2014 to 61.8 million in 2019. Brazil has the most mature ecommerce market in the region and with a 2014 population of 202 million people — 62 percent of whom are under 30 years of age — it offers an appealing market.

Brazil has the most mature ecommerce market in the region and with a 2014 population of 202 million people — 62 percent of whom are under 30 years of age — it offers an appealing market.

Forrester predicts that Mexico will have 21.1 million online customers in 2019. Cumulatively, customers in these three markets will spend $32 billion more online in 2019 than they did in 2014. Chile and Colombia are the other countries showing some traction in ecommerce, but Chile has a small population of 17.4 million and Colombian consumers are slow to adopt digital buying.

In a recent article, “Mexico Poised for Ecommerce?,” I presented some of the challenges of distribution and payment in that country. These extend to other Latin American countries as well. Ecommerce merchants must resort to alternative payment methods to reach those without credit cards, debit cards, or checking accounts.

In Mexico and Argentina, some online retailers offer cash on delivery as an option, while in Brazil merchants can apply online for the boleto bancário — a “bank slip” — from EBANX, an ecommerce payment provider. Boleto bancário is a printable, bar-coded invoice that is regulated by the Central Bank of Brazil and can be paid by consumers online or offline. (An ecommerce merchant can issue a boleto bancário to a customer, who then pays it at ATMs, supermarkets, or online.) Chargeback risk is eliminated and EBANX provides weekly settlements to merchants.

Shipping is problematic in Latin America and consumers are skeptical about product quality and actual delivery. That is why they prefer to pay cash on delivery. Several local ecommerce companies provide their own shipping services and have lenient return policies as they try to gain the trust of consumers.

While mobile shopping is becoming more popular, mobile purchasing is generally under five percent of online sales. Most of Latin America has slow 3G networks that are not conducive to online browsing or purchasing.

American merchants can avoid the difficulties of direct sales by using a marketplace. Traetelo is a cross-border marketplace that allows sellers to publish and sell their products to customers in more than 20 countries. Sellers list their products, receive the orders, send the items to Traetelo’s logistics center in Miami, and get paid directly by Traetelo in U.S. dollars. There is no listing fee but Traetelo takes a percentage of sales. Traetelo handles the taxes, duties, and international shipping. All orders are protected with Traetelo anti-fraud screening. 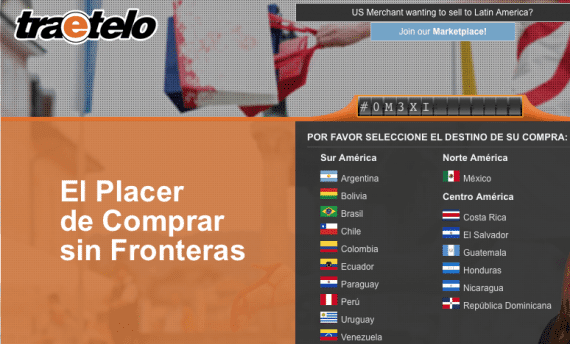 Traetelo is a marketplace that allows sellers to publish and sell their products to customers in more than 20 countries.

What Do Latin Americans Buy?

Online shoppers in Brazil are starting to buy in categories like apparel, accessories, and appliances. The most frequently purchased product categories in cross-border B2C ecommerce are computer hardware and personal electronics; the most popular countries to shop from are the U.S. and China, according to yStats.com, a research firm. Travel products and electronics are the most frequently purchased items in Argentina, while music, movies, and electronics are popular online purchases in Mexico.

The Downside to Selling in Latin America

Both Argentina and Brazil impose high taxes on imports and American merchants thinking about selling to these countries should consider carefully about whether their goods will be affordable. Brazil imposes a flat import tax of 60 percent on the cost, insurance, and freight value of goods up to U.S. $3,000. Duty rates of up to 35 percent and sales taxes may also apply.

It is not uncommon for taxes and fees to double the cost of the product to consumers. As a result, digital sales will comprise only four percent of total retail sales in 2015. Nevertheless, these costs have not deterred the Brazilian middle class from buying goods online. In Argentina, a value-added tax rate of 21 percent applies as does a duty rate of up to 35 percent.

In short, Latin America is a relatively small market with several obstacles. But a growing desire for quality foreign goods is emerging. Merchants that can target the growing middle class can be successful.