Email service providers (ESPs) are leading this renewed vitality and interest with the integration of email with social media. In this article, I review four popular ESPs in terms of how well they have incorporated social media into their respective platforms.

Constant Contact may be the best-known email marketing platform, especially for small business. While it includes a number of social media features, such as social sharing and bookmarking, its most recent effort is the acquisition of the social network monitoring service, NutShellMail.

NutshellMail collects social media activity from sites like Facebook, Twitter, LinkedIn and MySpace and organizes it into a single email digest delivered daily to the user’s inbox. This can be extremely useful to a business owner because he or she can more easily keep track of what is being said about the company via social media.

NutshellMail informs the user of new Twitter activity, including followers, @messages and direct messages. Users can keep track of key metrics from their Facebook pages, such as page views, new “Likes,” comments, and Wall posts.

I am a real fan of NutshellMail and have it scheduled to deliver a digest the first thing every morning. It has served to streamline the fire hose of information that social media can become and saves me hours of time. 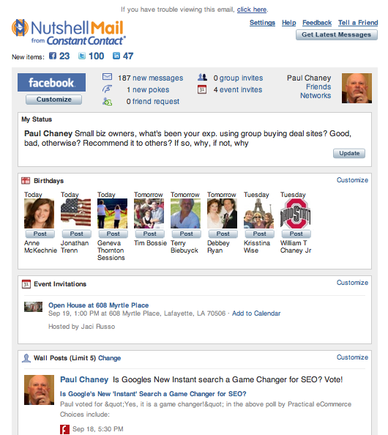 iContact has partnered with social media marketing platform Flowtown to put a human face on email lists. It takes emails from a merchant’s customer database and finds the social networks in which those list members have a presence, along with other publicly available information.

Taking what it finds, Flowtown creates new fields, such as location, gender, age groups, and social networks, then populates that information to the customer’s record. A business that wants to send an email just to customers who are on Twitter, for example, can now do so. Segments can be also combined to send even more highly targeted emails. 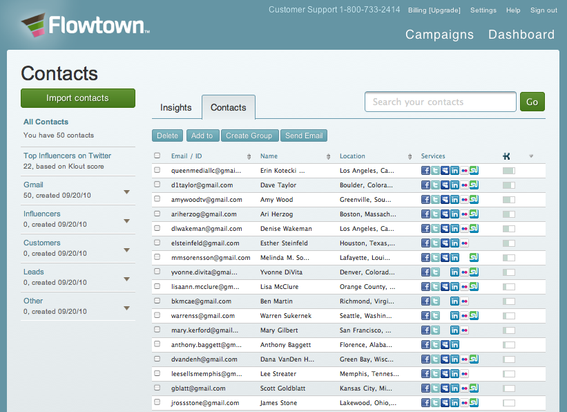 Social Forward makes it easy for subscribers to engage with and share email marketing messages through the following suite of sharing capabilities: 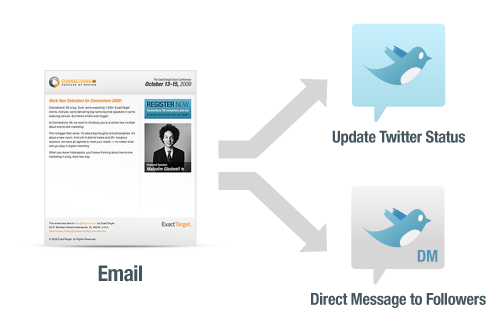 MailChimp has embraced social media integration more pro-actively than any other platform, in my view.

The company provides everything from one click sharing of campaigns on Twitter, Facebook and other social sites, to the incorporation of Twitter and Facebook email templates that present company profile information. There are also templates for merchants who sell products on Etsy, Amazon and iTunes. In addition, through its use of “merge tags” MailChimp is one of the few companies that incorporates the Facebook “Like” button in email campaigns.

Moreover, in its latest release MailChimp has added Facebook Comments functionality so users can leave comments on the email campaign itself and interact with each other in much the same manner as threaded comments on a blog might work.

Perhaps the most impressive display of its social media prowess is MailChimp’s new SocialPro program, a free service that layers mailing lists with publicly available social data. It functions almost exactly like iContact’s integration with Flowtown. MailChimp uses a similar service, RapLeaf, to source its data.

With SocialPro, list administrators can log into the dashboard and see photos from a sampling of list members that MailChimp has assembled (a feature referred to as “Faces”), then click a given photo to view detailed information about the member.

Two other ESPs that have yet to integrate with social media as deeply, but which deserve honorable mention, are Vertical Response and Emma.

Vertical Response offers a means by which users can post a link to a hosted version of email to Twitter or Facebook from the administrative dashboard.

Emma enables social sharing capabilities similar to those offered by other platforms, such as those previously mentioned.

Though I reviewed four platforms, I could have just as easily looked at a dozen or more. Email service providers are taking advantage of the benefits social media has to offer. It is refreshing to see how email and social media serve not only as complementary marketing channels, but as integrated ones as well.