American adults are more likely to email and search than any other online activities, according to the results of a recently released survey.

The Pew Internet & American Life Project has been monitoring online behavior for nearly a decade. Most recently, Pew Internet found that email was the most popular activity online with 62 percent of American Internet users checking or sending messages almost daily. What’s more, some 92 percent of the American online population uses email. 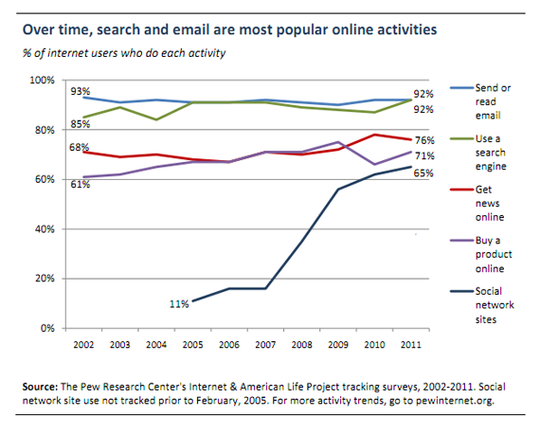 Email has remained the most popular online activity since at least 2002.

“Email and search form the core of online communication and online information gathering, respectively,” wrote Kristen Purcell, the Pew Internet Project’s associate director of research. “And they have done so for nearly a decade, even as new platforms, broadband and mobile devices continue to reshape the way Americans use the Internet and web. Perhaps the most significant change over that time is that both activities have become more habitual. Today, roughly six in ten online adults engage in each of these activities on a typical day.”

Based on the Pew Internet survey, email users should represent an important segment for ecommerce marketers. For example, 97 percent of Internet users earning $75,000 per year or more are email users. Likewise, some 78 percent of individuals in that income bracket use email almost every day.

College graduates were also heavy email users, with some 77 percent of those surveyed reporting almost daily email use.

Although some ethnic groups showed somewhat less email use, the numbers were still very promising. For example, Pew reported that some 88 percent of Hispanic American adults were email users and that some 53 percent were likely to use email on a typical day. This may indicate that email marketing could be a potent tool for reaching this demographic specifically.

From the marketer’s perspective, this is another confirmation that search engine marketing is an important tactic.

What About Social Media?

The Pew Internet Project has been monitoring social media usage since 2005. In this most recent survey, 65 percent of American Internet users said that they used social media sites like Facebook, Twitter, or LinkedIn. It is important to note that Pew was measuring whether or not someone used a service, not how many hours they used the service.