At its first-ever marketing conference on February 29, Facebook announced sweeping changes to its platform that have direct bearing on businesses. One of the most important was the introduction of Timeline for business pages.

Late last year, Facebook introduced Timeline to individual users to replace Profiles. There was much speculation then about whether Facebook would also implement the new layout with business pages. Many of us were surprised at how quickly Facebook did just that.

Page owners have from now until March 30 to make the change to Timeline voluntarily. After that date, Facebook will release Timeline to all business Pages.

This article outlines in detail the features of the new Timeline and suggests ways merchants can take advantage of them for marketing purposes.

The cover photo is the first thing people see when they visit your Page. It acts like a large billboard and presents a branding opportunity that is much more effective than the photo strip that appeared across the top of the previous Page format.

Choose a unique photo and change it as often as you like. This is a great opportunity to unleash your creativity and showcase popular products, people using the products or some other type of brand representation.

To give you a better idea, here are four examples of cover photos, one from a small business and three from nationally known brands.

Cover image of Louisiana-based clothing retailer Brother’s on the Boulevard.

Starbucks was one of the first brands to implement Timeline.

Facebook says that cover images must be at least 399 pixels wide. However, they look best when set to 855 pixels wide by 320 pixels high.

Gone are the 180×540 pixel profile banners. As you can see from the examples above, profile images are inset in the lower left-hand corner of the cover photo and are reduced to 180×180 pixel dimensions. Use your logo or another image that represents your company.

Facebook Page tabs, which used to be accessed from the left-hand column menu, are now housed at the top of the page just under the cover photo. Thanks to the new location, tabs are more prominent, but I think it will take time for users to get used to clicking them. Even though the ability to create custom tabs still exists, I could see where they would get less traffic, at least for the short-term until visitors get used to the new interface.

Facebook tabs are now located at the top of the page.

Photos appear in the first spot, but by mousing over any tab and clicking the “pencil” icon that appears, you can change the order of everything else. That means the custom Welcome tab you spent so much time creating can still be seen in whatever order you choose. Only four tabs appear initially, but by clicking the drop-down arrow located to the right you can show a maximum of 12 apps. Just make sure to put your most important ones first.

In addition, Page tabs are now wider. They used to be 520 pixels in width; they are now 810 pixels. The more narrow apps still work in the new, wider layout, but leaves a great deal of white space on the right-hand side. You can be sure that app providers such as North Social, Wildfire, Woobox and others will soon launch versions to coincide with the new format. 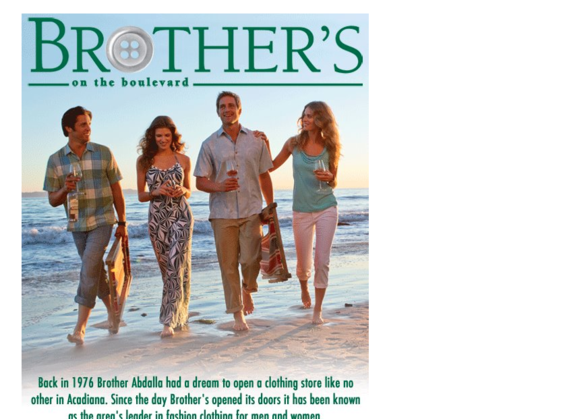 One disappointing change is that page administrators can no longer designate a default landing tab. In the previous version, admins had the ability to set that option so that someone who had not yet Liked the Page would first see a particular tab — the “Welcome” tab, for example.

Lastly, the popular “Like-gating” feature that requires a visitor to Like the Page before taking advantage of a special offer, coupon or some other incentive, still exists. However, because the tab itself may be hidden unless a visitor clicks the drop-down arrow, its importance could be somewhat lessened, especially in light of the fact that the “Like” button is prominently displayed on the Timeline itself.

Entries to the Wall are now set in a two-column format. However, you have more control over how those entries appear. Hover over any entry — Facebook refers to them as “Stories” — and click on the “star” icon to make it wider, or on the pencil icon to “pin” it to the top of your Page. Alternatively, you can hide or delete the entry altogether. 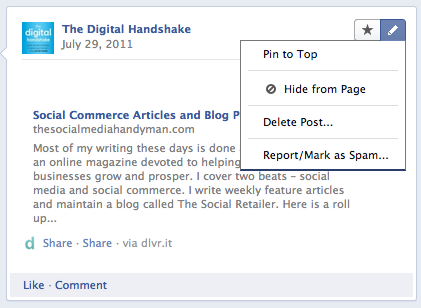 Timeline entries can be widened or pinned for more exposure. 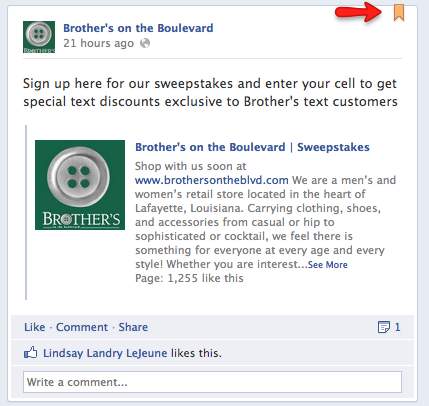 Pinned entries remain at the top of the Timeline for seven days.

I see a couple of benefits to these options. By widening an entry you give it more prominence. Let’s say you want to feature a particular product, for example. This is a good way to do it.

Pinning an entry gives it more “stickiness.” Such entries remain in the top position for seven days. If there is something you wish to highlight, this is a good way to do it.

The “Edit Page” button, located in the upper right-hand corner, has now been replaced by one that says “Admin Panel.” 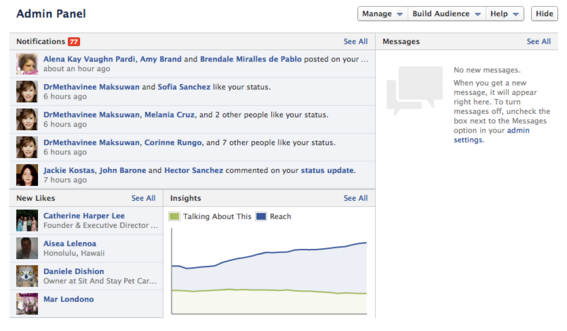 The Admin Panel provides a snapshot of page activity and engagement.

All the other administrative features still exist and can be accessed by clicking the “Manage” button located at the top of the admin panel.

You now have the option of allowing users who have Liked the Page to contact you privately using messages. This is a feature that has long been associated with individual user profiles, but that has just been implemented on Pages with the introduction of Timeline. Such messages also appear in the admin panel and merchants can respond with a message to the sender.

Just as with Timeline for individual users, brands can now add a history log. This could contain significant events in the life of the business, such as when it was founded, new product releases, and other milestones that have occurred. This gives visitors the opportunity to get to know the history of the business, which could lead to a greater sense of loyalty and trust.

Summary of Benefits to Merchants

I’m certain other marketing benefits will surface as merchants get familiar with the interface and as app providers determine ways to better integrate their applications into Timeline. For now, merchants can choose to preview the new layout without committing to it. After March 30, however, Facebook will implement Timeline for everyone.