At f8 2011, Facebook’s annual conference held last week for developers and entrepreneurs, founder and CEO Mark Zuckerberg announced a series of changes to the social network’s platform. Most of the changes affect personal profiles, but some have to do with how Fan pages work.

I will outline these changes in a two-part series. Today’s “Part 1” installment focuses on changes made to personal profiles, addressing what those changes mean for ecommerce merchants. Next week I will address changes made to Fan pages.

In “Understanding EdgeRank, Facebook’s ‘Quality Score’ for Wall Posts,” I discussed Facebook’s ranking algorithm, which is designed to ensure that only the most relevant content is seen by users. Facebook has taken another step in that direction by changing the way “News Feed” works.

Previously, News Feed opted to show only what Facebook referred to as “top news.” Users could change that to show the most recent items instead. Now, both “top news” and “recent news” have been combined into a single stream. 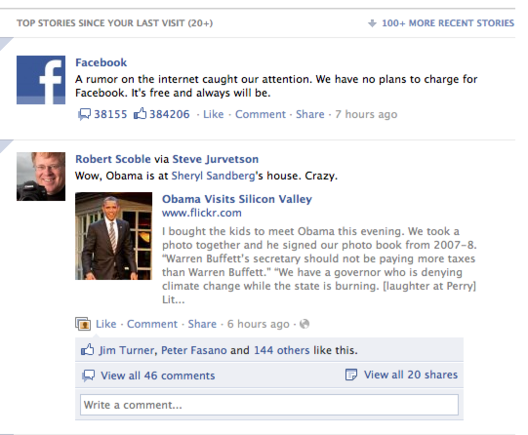 Typically, users will see top news first, then recent news will be shown further down the page. However, users who visit Facebook more frequently will see recent news items first. The mechanism Facebook uses to denote what posts qualify as top news is a light-blue triangle that sits in the upper left-hand corner of the post.

Top news items are denoted by the presence of a blue triangle.

Only the most interesting, engaging and relevant content — as determined by Facebook — make it into top news. Users have the option of removing an item from top news, hiding the item or even marking it as spam. Conversely, they can also mark an item included in recent news as a top story. 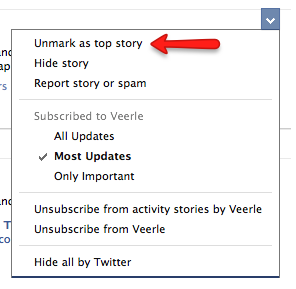 Users have the option to unmark items as top news.

For Fan pages, users can mark items as top stories, hide a particular item, or hide all items from a page.

Users can hide all items from a fan page.

This has serious implications for merchants. Unless Facebook determines that the content posted to your Fan page Wall fits the above criteria, it will not be shown — not as top news, at least. The forces merchants to find ways to increase engagement activity around each of the posts. In my “EdgeRank” article, I outlined five steps merchants can take to improve their Edgerank and increase the likelihood content will receive favorable attention.

News feed items often have a time lag before appearing. With the introduction of its new “Ticker” component, Facebook has entered the era of real-time updates.

Ticker shows the same content users were already seeing, but displays updates instantaneously, in a similar manner to Twitter. “Now when a friend comments, asks a question or shares something like a check in, you’ll be able to join the conversation right away.” says Facebook. 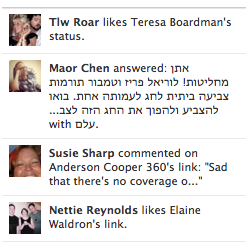 Ticker is located in the right hand column of the user’s News Feed page, just above Facebook ads. If the “chat” window happens to be open, Ticker items appear at the top above the list of friends who are available to chat. Content from both Friends and Pages — that the user has Liked – appear in the stream.

This, too, has implications for merchants. To stay top-of-mind with the user, many merchants post frequently. That could backfire, however, as users may consider frequent updates a nuisance and un-Like the page as a result.

Unfortunately, there are no rules when it comes to posting. How much is too much is subjective. Consider asking Fans how often they want updates. And monitor Facebook Insights — the analytics component tied to Fan pages — to track the number of un-Likes relative to the number of posts.

One of the biggest changes announced at f8 is the addition of what Facebook refers to as the “Subscribe” button. This gives users greater control over what appears as top news and provides the option of subscribing to content from friends, as well as unsubscribing from content they no longer want included in the news feed.

Furthermore, users can choose whether they want to see all items, most items (the default) or only the most important, such as a job change or move to a new city, for example. Another interesting twist is that users can now subscribe to content from people who are not friends. This applies only to content that those people have marked as “Public,” however, so that privacy will not be compromised.

So far, the subscribe option only applies to individuals, not Fan pages. I wonder, however, when Facebook will apply it universally.

Facebook has replaced the navigation menu, which used to read “Home,” “Profile” and “Account,” located in the upper right-hand corner of the page with two new menu items:

The navigation menu shows thumbnail and name of user.

These are not all the changes Facebook made to its platform. But they constitute the more important ones that affect a merchant’s use of Facebook, not only from a personal perspective, but from a business use, as well.

In next week’s article, I will address changes made to Facebook Pages.