Bill and Louise Bowers are ecommerce merchants and owners of Classic Golden Pecans, a specialty products company located in Lafayette, Louisiana, the heart of Cajun country. Classic Golden Pecans sells pecans, candied pecans and confectionary items native to the region. Customers include both individuals as well as businesses, which use the products as corporate gifts, especially during the holidays.

Classic Golden’s business tends to be seasonal. Its physical storefront is open only between November and February, serving customers during the holidays and at Mardi Gras. To supplement in-store sales, the Bowers have become increasingly dependent on their ecommerce website, not just for seasonal sales, but also year round.

“We do a lot of corporate business, which is not necessarily relegated to seasonal sales,” said Louise Bowers. “Since our brick-and-mortar store is open for a limited period of time, we look to our online store to help make the difference in terms of profitability.“

And make up the difference it has. As the result of a determined effort to increase the effectiveness of their web presence, the Bowers have seen online sales increase and their business expand nationally. “Our products have an almost universal appeal, so the website has enabled us to expand well beyond our local area. With a limited marketing budget, the Internet has been a boon in helping us extend the reach of our brand outside the region,” stated Bowers.

To fortify their Internet marketing efforts, the couple began experimenting with social media, but they confess it is an area where they have little knowledge. “Due to our age (the Bowers are in their late fifties), we have not been involved in social media to any extent. However, we realize it is where the Internet is headed and we need a presence there,” said Louise Bowers. To gain such a presence the couple enlisted the help of Internet marketing consultant, Brian Bille.

“It’s fair to say Classic Golden Pecans is in an exploratory phase in their use of social media for marketing. I’ve been able to help them develop an engagement strategy and clarify their goals, which are three-fold: to engage prospects and customers, build long-term brand loyalty and encourage word-of-mouth referrals about the products they offer,” said Bille.

The company is using Facebook and Twitter initially, but its primary emphasis has been in building a presence on Facebook through the use of a Fan Page. “For the moment, Twitter is ancillary and not being used proactively. My goal is to help them see how both can work in tandem,” stated Bille. 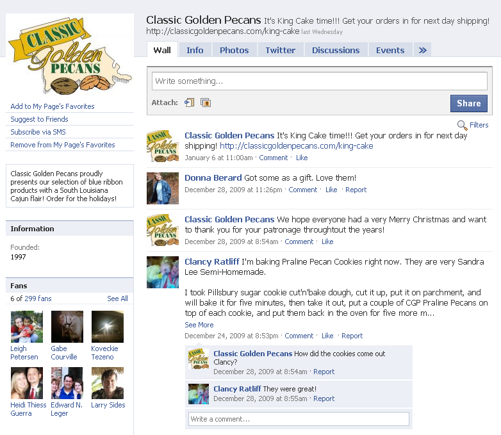 In keeping with increased attention being paid to the use of social media, the company has incorporated Facebook and Twitter icons on the home page of its website. Plans include building links to these and other social networks into the site template so that they appear on every page. “Rather than have our website simply be an ‘information silo,’ our goal is to turn it into a hub connecting the company to everywhere else we have a presence online,” stated Bowers. 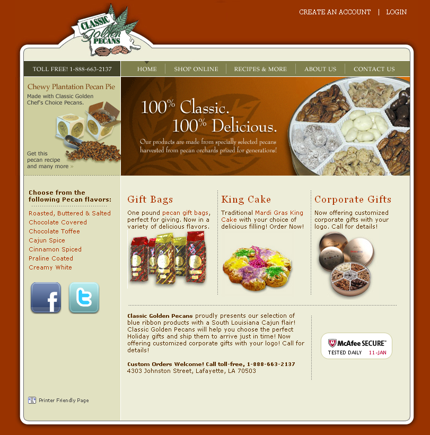 The Bowers are doing a number of things to engage their roughly 400 Facebook fans, such as sharing pecan recipes, promoting products and directly engaging with fans via comments. “Future plans include an enhanced use of social media with more activity taking place on Twitter,” said Bille. “In addition, email marketing will be incorporated to drive sales during off-peak times and provide a framework for customer retention and top-of-mind awareness.”

In 2009, the company used a combination of several online marketing approaches, including organic search engine optimization, pay-per-click and social media. Those efforts are paying off, too. Social media has become a chief traffic driver to the website and is considered to be responsible for some sales, though no definite metrics have been applied to determine just how much.
Regardless, online sales saw a major increase from previous years. “Revenue was up seventy percent and the number of sales up over ninety percent. All that during a year when online retail sales were expected to grow only by four percent,” said Bille.

Based on this success, Bille offers some advice to small ecommerce merchants like the Bowers, “It’s best to combine several online tactics, but especially search and social, as the lines separating the two are less well-defined. One has bearing on the other.” Bille suggests experimenting with Facebook and Twitter as a first step. “There is no need to become overwhelmed by everything social media has to offer. Take small steps into one or two social networks, then expand as resources allow,” he adds.

The Bowers are excited about what they’ve seen as major returns with minimal investment. “In terms of building our business, the Internet is the future,” said Louise Bowers. “We’re excited about seeing where 2010 will take us as we expand our efforts into the use of online marketing, and especially social media.”