Obtaining loans to grow ecommerce businesses can be difficult. But, fortunately there are financing sources sprouting up that target this niche. “Financing for Ecommerce” is our occasional series on identifying companies that lend to, or invest in, ecommerce businesses.

In this inaugural installment, we’ll take a look at Kabbage.com, a new loan service for eBay merchants. Kabbage automates the process of lending money to eBay merchants by analyzing a seller’s activity on eBay and, if approved, advancing the money to the seller via PayPal. The process is quick, and eBay sellers can borrow up to $15,000. The loan itself is unsecured and carries high, credit-card type interest rates, depending on the seller’s credit score, eBay ratings, selling history, and other factors.

Kabbage was founded in February 2009 by seasoned technology and banking executives. The company has raised, to date, roughly $3 million from investors and lenders, according to news accounts and SEC filings. It is based in Atlanta.

We spoke to Kathryn Petralia, chief operating officer and co-founder of Kabbage.com. 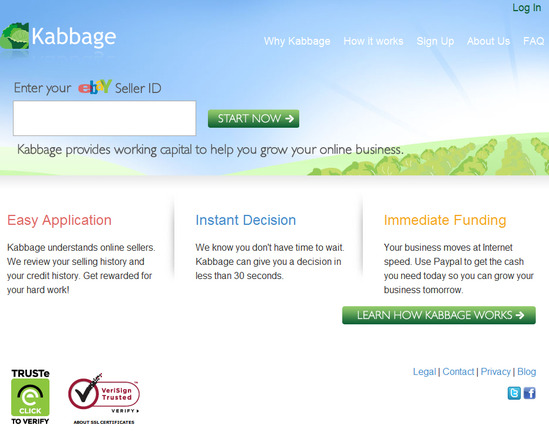 Practical eCommerce: How does Kabbage.com work?

Kathryn Petralia: “The merchant comes to the Kabbage.com website and they enter their eBay seller ID. We immediately screen it to make sure they’ve been selling long enough – our metrics require merchants to have been selling on eBay for at least one year, the longer the better because we’ll have more data to analyze.

“We also track their transaction history immediately to see what their monthly transaction volume is. [Applicants] give us third party access to that backend eBay transaction data so we can calculate more specifically what their monthly sales are, which we use for our underwriting of the loan. The other thing is that it tells us they are who they say they are. We then check the merchant’s credit report. We look at all those data elements together.

“We also look at eBay specific rankings, i.e. do your customers hate you. We look at a seller’s rating, how many open items, open dispute items, etc. We look at all the available data that can help us understand how these merchants satisfy their customers.

“So, after they give us access to their eBay backend data, we do the same analysis of their PayPal account. We see their transaction history and we’re looking for things that typically could be a high indicator of fraud like a charge-back rate, things like that.

“We collect social security information from the merchant and we also collect business information such as tax ID and the business type. We then immediately calculate eligibilities.

“So in just a couple of seconds, we’ll let them know whether or not they’re eligible for an advance. Then they select the amount they want and we show all the fees associated with this and if they are satisfied with the terms, they hit the ‘submit’ button.

“At that point, they enroll in a billing agreement with PayPal and receive the funds within minutes.

“The average customer can go through this process in under five minutes so it sounds like there’s a lot going out there but it’s really very quick.”

PeC: How much does Kabbage.com cost to use?

Petralia: “Kabbage advances are fee based. So, for example, say a merchant gets a $1,000 dollar advance and pays it back in one month. That merchant will only pay 6 percent [equating to 72 percent annually] of the total advance. They get a $1,000 advance; they pay us $60; they walk away. If the merchant keeps that $1,000 advance for six months, they’ll pay an average of 16 percent total over the course of the six months – a $160 total fee on that thousand dollars [equating to 32 percent annually].

“So, it’s a maximum six month period that an advance can be held by a merchant and all of the merchants have to enroll in auto-payback system via PayPal. We automatically take a percentage of the initial advance amount every month. So the idea is in no more than six months, this sum of money will be paid off. A business will not be approved for an amount they cannot payback in that timeframe.”

PeC: Can a merchant take out more than one advance at a time?

Petralia: “Yes. They could come to us in month one and take a $500 advance and in month two take another $500. But, again, they can only do this if they qualify and the amount of business they do will allow them to pay this advance back.”

PeC: On average, how much financing is available for an eBay merchant?

ListenListen to Kathryn Petralia discuss her professional background, and the founding of Kabbage.com.

PeC: Where does the Kabbage capital come from that is advanced to the merchants?

Petralia: “We have a lot of different sources that we go to for capital. It’s a mixture of bank loans and capital from investors thrown into a pot. We use a lot of traditional banks that lend to businesses.”

PeC: Why don’t traditional banks offer this kind of service?

Petralia: “Well, the reason is they don’t have technology and they aren’t risk takers. They also don’t have a way to automate their underwriting process.”

Petralia: “Currently, we are domestic U.S. only. But, we have plans to expand overseas.”

PeC: And can any other merchants, besides eBay merchants, take advantage of Kabbage’s advance service?

Petralia: “No. We’re not there yet, but we’re going to get there soon, in the immediate future. In the next couple of months we are adding more data sources. Those data sources could be other marketplaces; it could be other kinds of business accounts like a business checking account or a merchant account. It could be the ecommerce site’s inventory management software. And all of that will just allow us to serve more and more merchants because, of course, not everybody sells on eBay.”