Microsoft announced that its forthcoming Internet Explorer (IE) 9 web browser will include an opt-in anti-tracking feature that will block third-party content, and even prevent programs like Google Analytics from working. This is on the heels of a U.S. Federal Trade Commission (FTC) report related to consumer privacy. 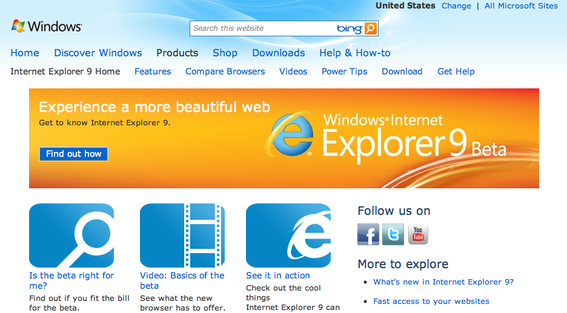 The proposed new feature is called “Tracking Protection” and was described last week in a “IE9 and Privacy: Introducing Tracking Protection,” a Microsoft blog post that makes use of the aforementioned FTC report, in PDF form, at “Protecting Consumer Privacy in an Era of Rapid Change,” to demonstrate the need for this new, potentially heavy-handed approach to web privacy.

The primary concern is third-party tracking.

Third-party tracking sounds a little wicked to begin with. And if one is not careful about how it is described it can seem even more so. For example, it might be possible to describe third-party tracking as the practice of monitoring everything a user does on a particular web page or across several web pages using a series of hidden “beacons” that users probably don’t even realize exist.

More specifically, third-party tracking happens when a web publisher, for example an ecommerce store owner, produces a web page that contains scripts or content from another website (which is the “third party,” after the site visitor and site owner). To provide this script or content, the third-party — the other website — will often require information about the user, such as browser type, geographic location, site affiliations, or even browser history, which can later be compared across sites, time, and users.

What ‘Tracking Protection’ Does

The “Tracking Protection” feature allows users to subscribe to lists of blocked domains maintained by so-called consumer protection groups or companies that will automatically stop content from those domains from appearing in any website unless the user navigates directly to that domain. For example, this feature could completely block YouTube videos, which are clearly a form of third-party tracking — content for information — from appearing on any site except YouTube.com.

The new IE9 feature will also help users identify third-party content on a page, so that they can choose to block it or not.

On the surface, third-party tracking seems like something that should be blocked, but is it really? Google Analytics and similar programs are the primary examples of third-party tracking. These services provide site owners with vital information about site performance and, ultimately, help site owners improve visitors’ experiences. But “Tracking Protection” in IE9 could block them from collecting any data from its users since this is a form of information for information tracking.

Third-party tracking data is also used to provide personalization, for example. Many product recommendation services would be rendered useless if “Tracking Protection” was used broadly against their domains. The users could only receive a sterile shopping experience.

And furthermore, integration with social media, for example Facebook “Like” buttons, could also be blocked. Again, this could limit the user experience.

Third-party tracking is, perhaps, no more invasive than real world data collection. For example, brick-and-mortar stores regularly track how many customers visit their locations, which products sell, and what conversion rates are.

There have been abuses of third-party tracking, to be sure, wherein some sites have used this technique to get more specific information about users that really should not be available.

For online retailers, the greatest concerns about “Tracking Protection” will have to do with Google Analytics or other web analytics services and business optimization services like recommendation engines and marketing attribution services.

It is at least possible that widespread use of “Tracking Protection” could make it more difficult to gather business intelligence or even please customers.

Microsoft’s heart, so to speak, is certainly in the proper place: protecting browser users. And the fact that “Tracking Protection” is an optional feature as will no doubt blunt its impact. But, nonetheless, anytime browser features could affect how a company does business, it is worth paying attention.