With last week’s departure of Vic Gundotra, Google’s senior vice president of social, rumors are swirling about the demise of Google+. What does this mean to search marketers who have been investing time into the social network?

Changes to the Google+ Team

Gundotra was the man widely believed to be behind the creation of Google+. Google has appointed David Besbris, vice president of engineering for Google+, as Gundotra’s replacement. But the shake up at the top wasn’t the only change.

In addition, teams formerly assigned to work on Google+ features are being moved elsewhere. The Hangouts team in particular is moving under the Android mobile team, a potential signal that Google is placing greater focus on its mobile platform and stepping away from social.

Google denies that the changes signal an end to Google+. According to TechCrunch, a Google representative stated that “we have an incredibly talented team that will continue to build great user experiences across Google+, Hangouts and Photos.”

From the start, Google+ has been dogged by unfavorable comparisons to Facebook and other social networks. Google has also been criticized for artificially inflating its Google+ membership numbers by integrating it into more popular Google products like YouTube and Gmail.

In reality, though, Google+ has always been more of a platform than a social network. Google+ is the platform by which Google incorporates its own social features into its products, including search.

In reality, though, Google+ has always been more of a platform than a social network. Google+ is the platform by which Google incorporates its own social features into its products, including search.

Even if Google+ never gains the popularity of a Facebook, and it almost certainly won’t as a standalone social network, Google+ remains valuable to search marketing.

Authority and popularity signals that heavily influence natural search rankings have long been based on the links that websites create between each other.

Traditionally, the more links a piece of content has from other sites that are authoritative and popular, the more likely that piece of content is to be of value to a searcher. But search marketers found ways to artificially boost the number of links to their content, giving those who built links an advantage over those who didn’t.

In the last few years, Google has waged a pitched battle against webspam, attempting to identify and invalidate every form of artificial advantage possible. Google’s “Penguin” algorithm updates in particular focused on sites with poor link quality. But can Google really identify every form of webspam and counteract it algorithmically?

More than one billion people a month are active on Facebook, according to its first quarter earnings report. That’s one billion people sharing information and content — links to web pages, photos, videos, and status updates — that’s valuable or interesting to them. And the more people who share that content, the more valuable it is. It’s like the early days of placing value in links, but in the case of social signals the user valuing the content is more easily traceable and less easily spammed. That’s gold as a signal in a search algorithm.

The problem is, Google doesn’t have access to the depths of social signals that Facebook, Pinterest, and other social networks collect. Yes, Google can crawl certain public areas of those sites, but much of the content shared and valued by members remains invisible to Google’s algorithmic eyes.

Google+ is Google’s only unrestricted source of social information. As such, it is far too valuable a signal of authority and popularity data to fall by the wayside. Google+ as a platform will live on and continue to be baked into Google’s other products as a social layer.

Even though Google+ posts no longer pass link popularity, active participation is still valuable. Google denies that posting on Google+ provides any direct ranking benefit, but there is a strong correlation between higher search rankings and Google +1s.

A more tangible benefit to Google+ activity, however, is the addition of Google+ information and links in your brand’s Knowledge Graph (where Google provides answers to queries in the search results). For example, Lowe’s has its Google+ activity to thank for the items outlined in red in the image below. 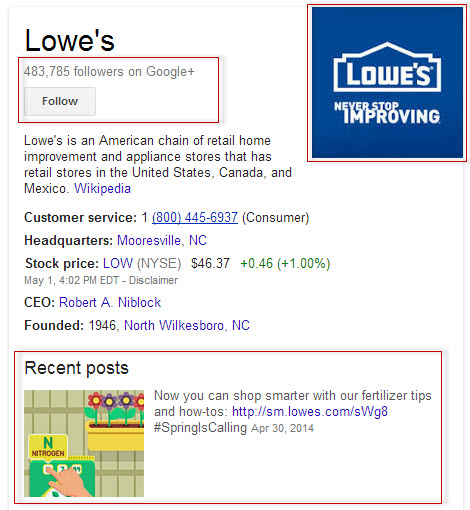 This added real estate in Google’s search results provides visual interest, a larger logo, visibility into the brand’s latest Google+ post, and the ability to follow the brand on Google+ directly from the search results. In the increasingly competitive landscape of search results, where so many modules push even the first natural search result lower on the page, it’s critical to have this extra visibility in the Knowledge Graph. Plus, it’s free.

In addition, content shared on Google+ also enjoys a faster initial Googlebot crawl rate than it would otherwise. The sharing actually prompts Googlebot to crawl the new content, sometimes within seconds of its posting. If your site isn’t one of the major brands that enjoys hourly crawls already, prompting Google to crawl more quickly with a posting could be the difference between being crawled today and being crawled next week. That, in turn, could be the difference between ranking today and letting your competition get the jump on you.

Google+ doesn’t have the user base that Facebook and the other social networks boast. But it does offer something more important to search marketing: integration at the platform level into Google’s products. Whether or not it’s truly a ranking signal today — Google says no — participation in Google+ offers SEO benefits to ecommerce sites that no other social network can.