A growing percentage of Internet consumers use Facebook. By some accounts, it is the second largest website and ecommerce merchants are now finding ways to tap into that traffic. One of them is Guitar Syndicate, a newly launched retailer of musical instruments and accessories that uploads inventory to its Facebook page under a special store tab. Its co-owner, Scott Burnett, joined us recently to discuss the company’s Facebook strategy.

Practical eCommerce: Tell us a bit about Guitar Syndicate.

Scott Burnett: “We are a music equipment retailer and we sell guitars, music accessories, effects pedals, strings and guitar accessories. Our doors officially opened in March, so it’s for a brick-and-mortar location, but the web is huge for us. We’ve been building a web following prior to launch in 2010.”

PeC: How long have you had the web presence?

Burnett: “We’ve had it prior to the last quarter in 2009, and we did some interesting and new things to quickly build web traffic and to build a Facebook following.”

PeC: How many SKUs do you have on your site and in your physical store? 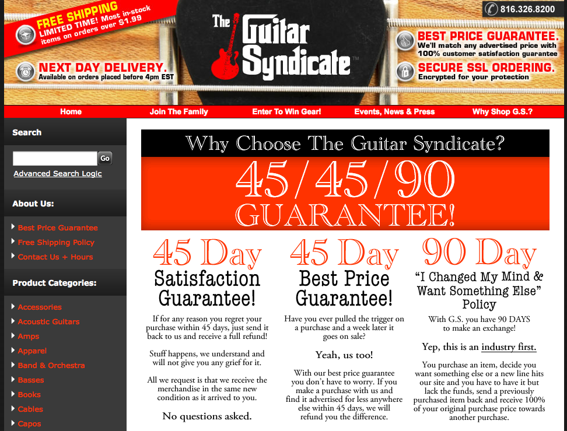 PeC: Explain what you’re trying to do on Facebook, as an ecommerce merchant.

Burnett: “This was actually a feature that we had not planned on having. We made a switch to CoreCommerce [ecommerce software] and then saw the Facebook ‘store’ option. Facebook is something that we’ve used to conduct a weekly giveaway. That’s how we initially built our traffic, and then there were a lot of giveaway sites and music instruments giveaway sites to pick us up and start plugging us. So we’ve been developing and building a database since the latter half of 2009.

“What the CoreCommerce store tab offers is really great because, if we want to plug-in or promote a specific product or a special that we have, we can direct users to that product’s home within Facebook. There’s no need to leave Facebook, no need to click and get to an external link. It’s just built right in there. We took specific interest in because it ties products and manufacturers names into Facebook search engine logic too.

“Initially, we have launched it on our profile page, on the user page. The CoreCommerce team helped us install it on our actual product or brand page for Guitar Syndicate, so it’s just not a feature. Our visitors aren’t used to seeing us on other people’s pages, but we monitor a click trail of those who click just like any other online store should, and we do give leads and we give reference to the search.”

PeC: Does all of the merchandise in your store automatically appear on your Facebook store tab?

Burnett: “No, it doesn’t. We are given the option if we’d like to publish specific product or not, and we can select to publish the whole store content, but we don’t. We’ve been pushing our higher priced, higher ticket items in our weekly specials.”

PeC: When you identify a product you want to feature on your Facebook store tab, do you have to enter descriptions, prices, or photos?

Burnett: “No. It automatically transfers and uploads everything. You have to link the accounts initially, but it’s not like Google Base where you supply a new feed each time you have an update. It’s seamless so it was just a natural thing to try and monitor. We have about 80 to 100 SKUs on our Facebook store tab right now.”

PeC: What kind of conversion rate are you getting?

Burnett: “About 10 to 15 percent of the clicks we’re getting for a product are coming from Facebook. And then, I’d estimate probably an eighth of our sales have resulted from people who visited us through Facebook, and then they came back to make a purchase or bookmark the site.”

PeC: Do you pay CoreCommerce extra fees to have the Facebook store?

Burnett: “No. There are no additional fees.”

PeC: Do you expect CoreCommerce to eventually permit a user to complete a purchase without leaving Facebook?

Burnett: “I would love for a user to be able to do the checkout on Facebook. I don’t know how it would happen. It would have to be some type of widget or something, and install it within the app, because there are so many details with the processing and secure transactions, and the real time tracking of orders, and the UPS shipping information… I am assuming that that is down the line, but I don’t know how quickly we should expect to see it.”

Burnett: “The traffic in Facebook is just enormous; it’s the number two website in the world. The product search is huge with this. Instead of building multiple tabs and building our inventory and our photo libraries or video libraries, this is a really simple way to get your inventory in front of that huge audience that appears out of a search. When we initially installed it, we ran a few tests, and that was one of the big deciding factors for us to go ahead and have the store on Facebook in the first place.

“I am a part owner, and so I have a specific interest in this. The way CoreCommerce’s customer service has responded and the way they helped us move forward with specific requests is great. So, based on the experience we’ve had over the last two to three months, we definitely expect great things out of this app.”