In “Website Compatibility Testing Made Simple,” published last week here at Practical eCommerce, I explained the process for site operators, such as ecommerce merchants, to continually ensure their websites render properly across all common browsers, operating systems and screen resolutions.

I wrote in the article that BrowserCam.com is the testing platform I prefer, although there are several other good testing options, too, such as BrowserShots and Litmusapp.

First Use Your Analytics Data

Once you choose a testing platform for your site, the next question is to determine what, exactly, to test. I suggested in the article to first refer to your analytics package, such as Google Analytics, to determine the browsers, operating systems and screen resolutions most common among your users. For Google Analytics, all of this data, and more, is found in the “Visitors” link, as noted in the screenshot, below. 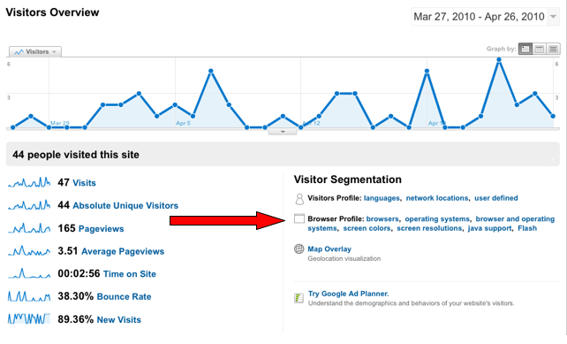 Beyond the data from your analytics, there are several good reference sources to determine total, overall statistics of all worldwide web users. MarketShare is my preference for these reference sources because I find it easy to use and the data is compiled from 160 million users each month. But other sources, such as W3Counter and StatCounter, are helpful, too.

Listed below are a few key data points to analyze from MarketShare.

The screen capture, below, shows the browsers and versions of browsers used in March 2010 by MarketShare’s sample of worldwide users. Use this to determine which browsers and versions of browsers to compatibility test for your ecommerce site. This data shows, interestingly, that Internet Explorer 6.0, which is an old and outdated browser, is still used by roughly 18 percent of worldwide users. 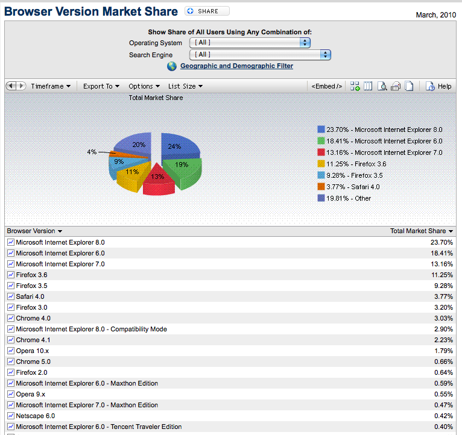 Ninety-one percent of all worldwide web users in March 2010 were on Windows operating systems, according to Market Share’s data. Mac operating systems were used by just over 5 percent. If any part of your site is incompatible with Windows, it should be fixed. 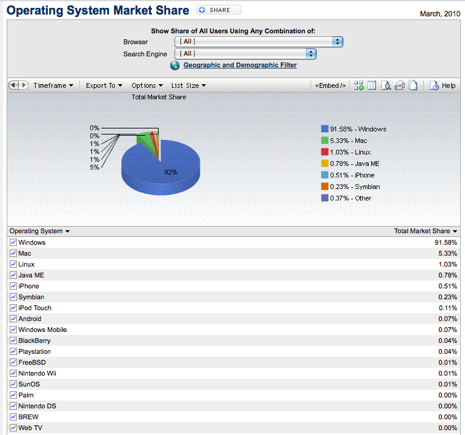 Fifty-five percent of all screen resolutions in March 2010, according to MarketShare’s data, were one of 1024×768, 1280×800, or 1280×1024 (pixels). If your ecommerce site does not render well on these three resolutions, you are likely losing potential customers. 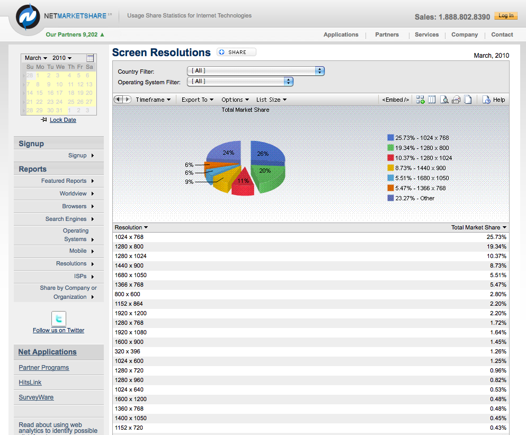 Every ecommerce business should continually test its website to ensure it renders well and functions properly in all common browsers, operating systems and screen resolutions. To perform the actual test, I recommend Browsercam.com. To determine what to test, I recommend first reviewing your own website analytics data. And, to ensure your site is compatible with worldwide users generally, I suggest using a service like MarketShare.